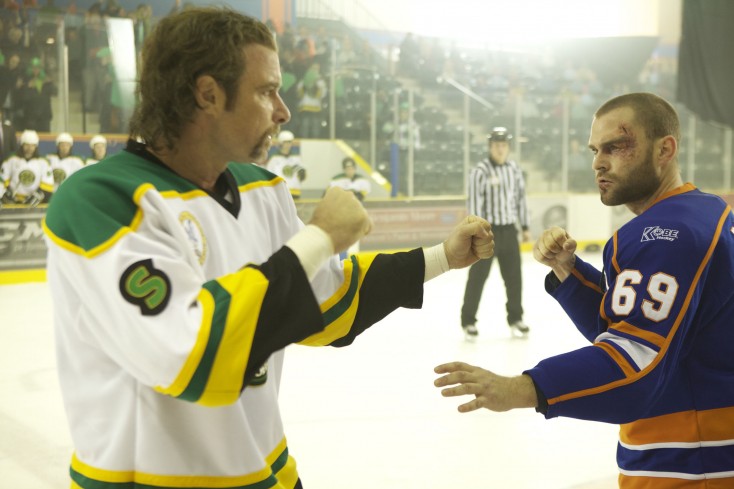 Seann William Scott is unexpectedly sweet natured as a bar bouncer turned professional hockey brawler in the outrageously profane comedy “Goon,” but most of this true-story-inspired tale is literally a bloody mess. When a slow-motion shower of gore and a broken tooth hit the ice during the movie’s first minute, it’s obvious that these fun and games are going to get gruesome.

Another problem is the presence of an aggravatingly obnoxious and tiresomely foul-mouthed best-friend supporting character played by Jay Baruchel, who cowrote the movie’s screenplay with Evan Goldberg. Both are veterans of Judd Apatow’s crude lowest-common-denominator comedies, and it shows. Baruchel seems almost pathologically determined to sabotage “Goon” with his hyperactively hammy and ceaselessly smutty performance.

Scott plays Doug Glatt, the slow-witted black sheep in an otherwise respectably upscale family that includes a gay brother. While attending a hockey game as a spectator, Doug takes two-fisted offense at a player who tosses around the “F”-word slur that rhymes with “maggot.” A coach who sees Doug knock the offender out cold decides he would make a good enforcer, the player responsible for protecting fellow team members and doling out beatings to rivals who want to play rough.

The premise of an unfailingly polite and childlike innocent who takes out opposing players using powerhouse, penalty-worthy punches may not have been as disturbing if the fights were shown as cartoonishly or harmlessly unrealistic. Even then, the fact that sports-related concussions have been in the news lately would make the subject matter questionable for a comedy. But some of the extended beatdowns here are as punishing and sickeningly graphic as “Raging Bull” boxing matches.

Liev Schreiber is excellent as Ross “The Boss” Rhea, the baritone voiced, brutal and believably bitter enforcer for another team. He’s the villain responsible for ruining the career of Doug’s broodingly self-destructive teammate Xavier LaFlamme (Marc André Grondin), a one-time wonder who lost his mojo after one of Ross’ on-ice assaults. In the tradition of nearly every sports movie ever made, Doug and Ross are fated to go mano-a-mano when their teams end up playing each other in a championship match.

What’s odd about the conflicted “Goon” is that it may have worked as either a straight drama (there’s absolutely nothing funny about Schreiber’s melancholy but arrogant Ross, who is frighteningly intimidating) or a lightweight goofy slapstick (Scott’s Doug is as pleasantly dumb as most of Will Ferrell’s roles). As it is, the movie’s savage brutality kills the comedy, but Doug’s Forrest-Gump-like gullibility can’t be taken seriously.

“Goon” is inspired by the book “Goon: The True Story of an Unlikely Journey Into a Minor Hockey League” about player Doug “The Hammer” Smith. The end credits include archival footage of some of Smith’s greatest “hits,” for those who want to see a few more unsportsmanlike fistfights before leaving the theater.