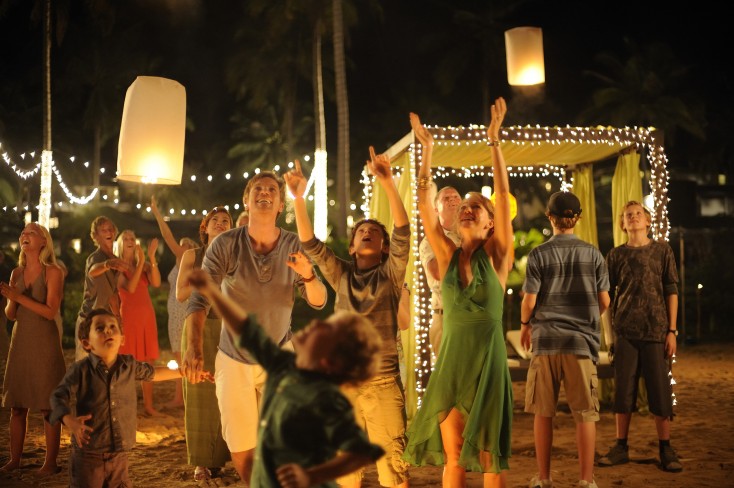 Inspired by the true story of family members separated by the 2004 Indian Ocean tsunami that killed a quarter-million people in a half-dozen countries, “The Impossible” is a moving portrayal of endurance and tenacity born of desperation. The overwhelming disaster itself is recreated with shocking believability, and the performances by leads Naomi Watts and Ewan McGregor are no less powerful.

After a bumpy flight, a well-to-do family arrives at a luxurious Thailand beachside resort so new that plastic still covers the light switches. Beautiful blond Maria (Watts) is a mother who gave up doctoring to raise her kids. Handsome husband Henry (McGregor) moved the family from the UK to Japan because of an unspecified job. The oldest of their three sons is surly Lucas (Tom Holland), who has reached the resentful and slightly obnoxious age where he wants little to do with his much younger brothers.

The movie starts out looking like a let-them-eat-sushi one-percenter travelog of the very good life as the family checks into their tropical paradise accommodations. So financially comfortable that they can afford to bring the boys’ Christmas presents along on the plane (imagine the excess baggage fees!), their main concern is whether they remembered to set the house alarm back home before leaving.

The tsunami’s terrifying arrival changes all that, thundering up the beach and toppling palm trees to engulf the entire resort. The special effects that re-create the tragedy are jaw-droppingly convincing, especially when the camera pulls back to show huge landscapes reduced to flooded rubble. As in 2010’s “Hereafter,” which began with a similarly amazing “how did they do that” depiction of the tsunami’s wrath, the technical wizardry on display here is state-of-the-art incredible.

The rest of the movie consists of a bloody Maria and a forced-to-be-responsible Lucas, who have been carried away by the waters, trying to reunite with Henry and the two other boys, who have managed to remain at the ruins of the resort. Things get even worse when Henry and those two sons get separated.

The inherently sufficient drama of everyone’s circumstances sometimes gets amped a little more than necessary. When Maria insists on continuing to believe that Lucas’ missing brothers might be safe somewhere, Lucas rather unreasonably shouts that “Simon and Thomas are dead!” Some frustrating alive-or-dead misdirection at a hospital comes off as a storytelling tease, and a dubiously convenient three-way coincidence wraps things up a little too tidily. There’s also the fact that changing the Spanish nationality of the real-world family who suffered the ordeal has been changed, which smacks of a kind of cinematic colonialism.

Those flaws don’t keep this from being a high-quality human drama that stands out from most holiday releases, if only by avoiding sitcom stupidity, empty spectacle of the musical or fantasy variety, and gratuitous gunplay.

The emotionally wrenching but relentlessly real-world based “The Impossible” certainly is not the follow up one might have expected from director Juan Antonio Bayona and screenwriter Sergio G. Sanchez, whose previous collaboration was the stylish psychological horror film “The Orphanage.” But once the force-of-nature brutality of the catastrophe itself subsides, they handle this story mostly with respectful taste and genuine heart.