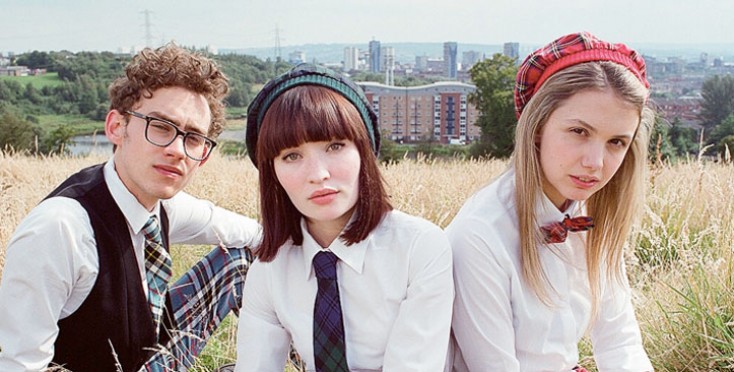 Belle and Sebastian frontman Stuart Murdoch’s endearing directorial debut “God Help the Girl,” like his gloriously retro-only-smarter pop songs, has an undertone of bitter reality that makes its musically transcendent moments all the sweeter. Featuring tunes from the B&S catalog, but mostly from Murdoch’s 2009 side project album that shares its title with the film, it’s a love letter to a dreamy Scotland summer when three oddball friends put together a divine-from-day-one band that’s too uncommercially literate and lovely for this workaday world.

Emily Browning stars as Eve, a melancholy, medicated but motivated would-be songwriter who escapes the hospital where she’s being treated for anorexia to go to Glasgow for a night of clubbing. Eve’s show-starting rendition of “Act of the Apostle II” in the montage of her journey is a delight, with campy visuals and lyrics like “bought an Independent to make me look like I got brains” and “my Damascan Road’s a transistor radio.”

She wakes up next morning on the sofa of James (Olly Alexander), a sensitive, smart and spectacled performer from the previous night whose set ended when his own drummer beat him up. James, whose day job is lifeguarding at an indoor pool despite the fact that he claims to have the constitution of an abandoned rabbit, marvels at Eve’s songwriting talent. She displays same by breaking into small-scale production numbers in classic movie-musical style, sometimes in costume and often singing directly to the camera.

Despite the presence of scenes such as Eve making herself throw up and meaningfully counting her meds at night, the overall tone of the film is less kitchen-sink drama than kitsch-and-sing fantasy. Eve, James and their ditzy blond third wheel Cassie (Hannah Murray) dress like fashionable thrift-shop hipsters from a timeless era that spans ’60s Carnaby Street to ’80s New Romantics and beyond. The trio enjoys a languid “Three Men in a Boat”-type mid-film interlude by canoeing together down a ridiculously scenic canal. Their anonymous but flawlessly proficient band sometimes swells to around a dozen members, complete with a string section, as the occasion demands. And some clever self-aware bits of Murdoch’s screenplay include Eve intruding on a voiceover by James to make her own comments, and James at one point asking the lyrics-as-conversation-prone Eve, “Do you often sing to people?”

Browning does a wonderful job of performing Murdoch’s polished and irresistibly pretty songs with the perfect combination of deadpan amusement and wryly romantic cynicism they require. She’s wistful, yearning, and almost reluctantly hopeful, frequently blank-faced but never empty-headed. She’s such an appealingly appropriate casting choice that if Murdoch ever wanted to take a break from his Belle and Sebastian vocalist duties, Browning could step right in for him. She’s that good.

As the brainy friend-but-not-boyfriend (despite his wishes to the contrary) James, Alexander avoids making his character seem too desperate, pathetic or sitcom-asexual. When an attempt at hooking up with Eve goes nowhere, James is disappointed but not especially surprised. What upsets him more is an art-versus-commerce argument they have later, when he tries convincing Eve that she should nurture her natural abilities instead of going off to a London music school in the fall.

Murray’s Cassie, who seems to be on a different plane of offbeat unreality from the rest of the cast, is a funny dumbbell with an orange bicycle helmet, an apparently telepathic dog and an angelic voice. Even she can see that Eve and James are meant for each other, however. “There’s never been so much repression of true feelings since Stalinist Russia,” she observes with unexpected acumen.

“God Help the Girl” is just precious and quirky enough to be gently charming without lapsing into full twee obnoxiousness. Your mileage may differ, however, depending on your taste for wispy whimsy. The best gauge for predicting whether this will be your sort of thing or put you into sugar shock is the most obvious one. While Belle and Sebastian fans will adore the movie’s style almost as much as its soundtrack, anyone who can’t abide the aching heart-on-sleeve earnestness of songs like “The Chalet Lines” or the baby-song bounce of tunes like “Funny Little Frog” may find its exquisiteness somewhat excruciating.

‘Sex Tape’ Suffers From Too Many Gaps in the Humor