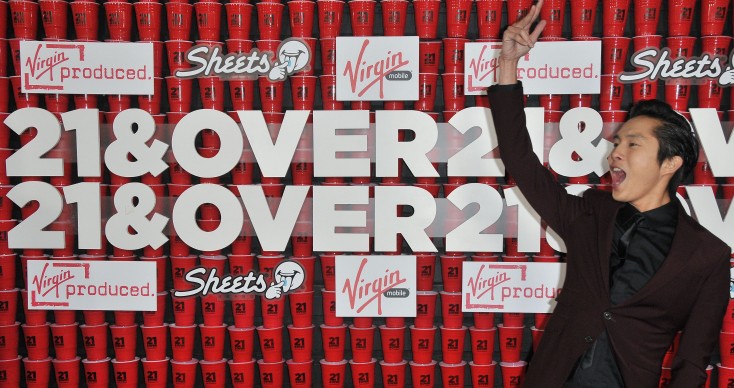 HOLLYWOOD— It was a big party in a college enclave in Los Angeles as red cups and red carpet lined a street of Westwood for the premiere of “21 and Over” starring Justin Chon, Skylar Astin, Miles Teller and Sarah Wright.

Helping to celebrate the LA Premiere, nearly nude guys and gals wearing underwear and a teddy bear ran back and forth on the carpet as the talent and celebrity guests arrived for the premiere. Actress Christine Marzano in particular was surrounded by a few of the teddy bear wearing guys not the carpet as she was being interviewed by a few media outlets.

Hyping up the crowd was Manny from The Streets of local Los Angeles radio station KIIS-FM as celebrities arrived. Manny took a moment to introduce all the talent from the film to the young college crowd surrounding the red carpet.

Joining in the fun was internet sessions KevJumba plus Phil Wang and Wesley Chan of Wong Fu Productions. These three Asian American celebrities were excited to see how far their friend Justin Chon has come in his acting career. This is Chon’s first major studio lead in his career. Chon and friends liked the fact that his character Jeff Chang wasn’t pigeoned holed into the stereotypical Asian role. Chon said on the carpet to Pacific Rim Video’s Chris Trondsen, “My character is just one of the guys.”

Speaking on being the lead and on the red carpet of the premiere of the film, Chon said he still felt like he was the small fry. Chon added, “It’s fun being a part of a movie where I’m actually in a lead.”

Phil Wang added, “It’s really great. He (Chon) doesn’t have an accent. He’s not doing kung fu. We had our “‘Harold and Kumar.”‘ Now we have ‘”21 and Over.”‘ It’s really cool to have people open to have Asian males just being ourselves.”

The biggest question of the night was, “How did you celebrate your 21st birthday?”

Christine Marzano’s 21st birthday was a pirate themed event with lots of beer. For YouTube sensation KevJumba celebrated his birthday with fellow YouTube star Ryan Higa by renting a hotel suite in Las Vegas with over 200 individual partying with them.

Actor Andy Dick couldn’t wait to watch the film because “21 and Over” came from the creators of “The Hangover.” Dick added, “There’s something about “‘The Hangover”‘ people. It could be really really good and I saw the trailer. It looked funny.”

The fun part for Andy Dick was that he was going to watch the film with his sons who are about the same age as the characters in the film. “It’s going to be great for them to watch the movie and for me to see them have fun watching the movie,” says Dick.

Tags:21 and over, justin chon, movie premiere
Previous Post’21 and Over’ stars Justin Chon & Miles Teller talk about favorite scenes
Next PostJames Franco Opens His Bag of Tricks in ‘Oz’