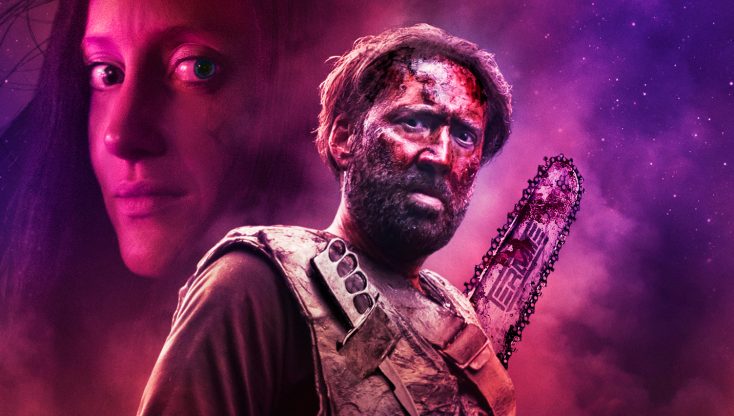 Sorry to Bother You

Bonus features are “Beautiful Clutter with Director Boots Riley,” a director’s commentary, a gallery, meet the cast of “Sorry to Bother You” and “The Art of White Voice.”

Set in the Pacific Northwest in 1983, outsiders Red Miller (Cage) and Mandy Bloom (Riseborough) lead a loving and peaceful existence. When their pine-scented haven is savagely destroyed by a cult led by the sadistic Jeremiah Sand, Red is catapulted into a phantasmagoric journey filled with bloody vengeance and laced with fire.

The “Mandy” DVD and Blu-ray includes behind-the-scenes, deleted and extended scenes. The film features the final score of the late renowned Oscar-nominated composer Johann Johannsson (“Sicario,” “The Theory of Everything”).  The DVD will be available for a suggested retail price (SRP) of $29.96 and the Blu-ray for an SRP of $29.97.

Murdoch Mysteries: The Christmas Cases Limited Edition is a collection of holiday movies of the smash hit Canadian and Acorn TV period mystery series, arriving on DVD Tuesday Oct. 30. Garnering an impressive 45 Gemini and Canadian Screen Awards nominations from the Academy of Canadian Cinema & Television during its run, the series centers on Detective William Murdoch (Yannick Bisson), a methodical and dashing detective, who enlists radical new forensic techniques to solve some of the city’s most gruesome murders.

Set in Toronto in the late 1890s and early 1900s during the age of invention, “Murdoch Mysteries” (a.k.a. “The Artful Detective”) centers on detective Murdoch (Bisson, “Sue Thomas: F.B. Eye”), a methodical and dashing detective, who enlists radical new forensic techniques to solve some of the city’s most gruesome murders.

Murdoch and his team solve yuletide crimes in these three feature-length mysteries set in Edwardian Toronto.

It is 1987, and an imminent Gorbachev-Reagan nuclear arms summit promises to ease world tensions. But life for the Jennings family is more precarious than ever: Elizabeth’s (Emmy nominee Keri Russell) relentless dedication as a KGB agent has dealt a potentially lethal blow to her marriage to Philip (Emmy nominee Matthew Rhys), who has left espionage behind. As Philip’s friendship with FBI agent Stan Beeman (Noah Emmerich) grows, the danger of exposure of the family “business,” which now includes Paige (Holly Taylor), reaches crisis level. With deft writing and impeccable performances, the sixth and final season of “The Americans” delivers the most stunning revelations and betrayals in the series’ history.

Dr. Seuss’ How the Grinch Stole Christmas: The Ultimate Edition

This holiday season, Warner Bros. Home Entertainment brings a triple dose of everyone’s favorite green grouch, the Grinch with the release of “How the Grinch Stole Christmas!: The Ultimate Edition.” Available now in stores, this highly anticipated release features three animated Dr. Seuss specials including “How the Grinch Stole Christmas!,” “The Grinch Grinches the Cat in the Hat” and “Halloween is Grinch Night.” All three animated specials are offered together in a Blu-ray Combo Pack, which includes a Blu-ray, DVD and digital copy, and are available for an SRP of $24.98. This title will also be available in standard definition and will retail for and SRP of $19.98.

The best-selling, perennial holiday classic, “How the Grinch Stole Christmas!: The Ultimate Edition” got even better with the addition of two Grinch specials, which are available in high definition for the first time. Based on the beloved book by Dr. Seuss, “How the Grinch Stole Christmas!” is considered among one of Dr. Seuss’ finest works for children. The story was originally adapted to television as an animated TV special and was highly praised by audiences.  It has been re-broadcast numerous times since its debut, with annual airings continuing to the present day.

Magnificently narrated by Boris Karloff (“Frankenstein,” “The Mummy”) and directed by animation genius and cartoon legend Chuck Jones (“What’s Opera, Doc?”), “How the Grinch Stole Christmas!” tells the story of the miserable Grinch, who wants to sabotage Christmas for all the Whos in Who-ville.

In “How the Grinch Stole Christmas!” the Grinch thinks that by stealing the Whos’ Christmas trees and presents, he’ll succeed in stealing their joy. However, when Christmas morning arrives, the Grinch is taken by surprise when he notices the Whos greet the day joyously singing Christmas carols regardless of the fact that their village has been completely stripped of holiday gifts, decorations and treats. The cheerful attitude of the Whos prompts the Grinch to ponder the true meaning of Christmas and he slowly comes to realize the spirit of the season is not generated by material possessions.

In “Halloween is Grinch Night,” when the Sour-Sweet wind starts to blow in Who-ville, all the Whos take cover because this signifies the beginning of Grinch Night, an evening in which the Grinch descends upon Who-ville to terrorize all its citizens. As the Grinch sets out on his journey to Who-ville, he encounters a courageous young Who named Euchariah, who attempts to stall the Grinch from reaching Who-ville. The Grinch however puts Euchariah into a trance in which he encounters all sorts of strange creatures who try to intimidate him.