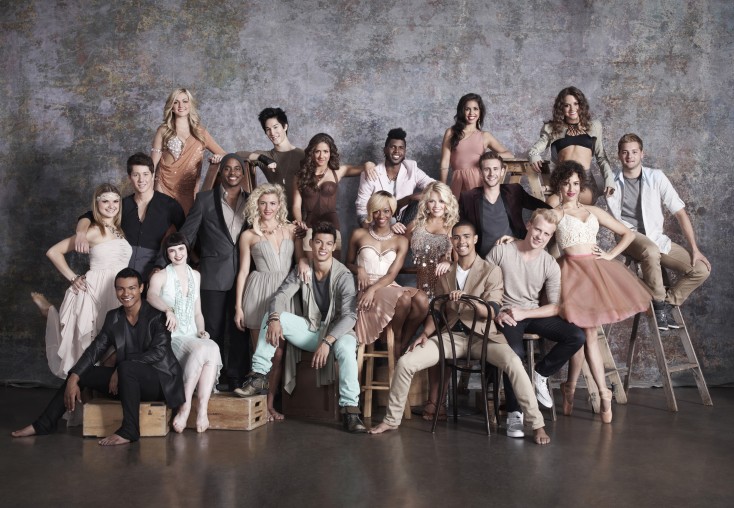 HOLLYWOOD— As season nine wrapped up its Las Vegas auditions, Fox’s “So You Think You Can Dance” celebrated its 200th episode taping Monday, June 25, along with the announcement of the Top 20 dancers competing for the show’s top prize.

It’s a big surprise to Nigel Lythgoe that the show has reached such an important milestone. Before taping of the episode, Lythgoe told the studio audience, “When my co-creator Simon Fuller came to me and suggested that we do this show, I said that it’ll never work and no one will watch dancing.”

Lythgoe, of course, was wrong as his co-creators, judges and host celebrated the show’s 200th episode with an onstage cake-cutting ceremony.

Preston Mui of Front Row Features Wire/Pacific Video caught up with Lythgoe backstage at the show’s taping and was told by the humbled dance judge, “I didn’t even think we’d be successful or make one episode, so to make 200, I’m thrilled.”

For Lythgoe the key  to the show’s continued popularity is that he and the other judges consider it something more than a job.

“The entertainment of actually being there and watching these amazing routines, terrific creative choreographers, brilliant dancers—that’s not work,” he says.

He went on to say that “So You Think You Can Dance” has illustrated to America how dancers have to be athletes and gymnasts along with the amount of work and creativity that goes into their choreography.

Show’s host Cat Deeley recalls that when she first started out in the industry, she auditioned for MTV. She was a bit surprised she was hired because the tape she sent out was so bad.

“I just recorded it on my mum and dad’s camcorder and it was really badly edited,” she says. “There was no finesse to it at all. It was really amateur. But somehow they called me back and I had to go in for later auditions.”

For her current hosting gig with “So You Think You Can Dance,” Deeley  was spotted by Lythgoe, who approached her and asked if she was interested in the job. She’s now celebrating the 200th episode of the show along with introducing America to the Top 20 dancers of season nine.

Deeley, along with the judges and choreographers, find this season’s crop of dancers  exceptional, from the first-ever step dancer to a martial arts wizard. The upcoming episodes should prove interesting. Choreographer Sonya Tayeh is hoping to work with martial arts dancer Cole Horibe.

Dance shows are not foreign to Horibe as his sister Cara is part of the dance crew Fanny Pak from the second and seventh season of “America’s Best Dance Crew.”

“I’ve always been in my sister’s shadow,” gripes Horibe. “I’m always known as Cara’s brother. Cara’s brother! This is my first time to actually step out of that shadow and be myself.”

One of the overall shining stars early on in the show is George Lawrence II. Nigel Lythgoe mentioned to George that he would be shining bright even when the lights are off on stage.

“So You Think You Can Dance” airs Wednesdays at 8 p.m.ET/7 p.m. Central on Fox. Video interviews of are available at youtube.com/frontrowfeatures