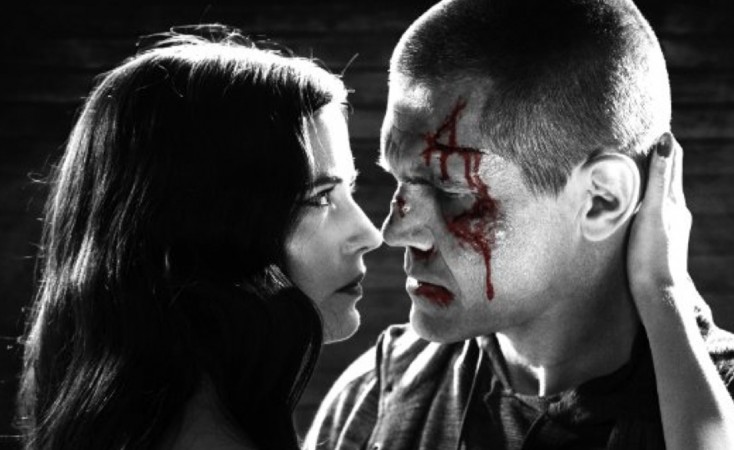 JOSH BROLIN stars in SIN CITY 2: A DAME TO KILL FOR. ©Weinstein Company.

This year’s undeservedly overlooked “Sin City: A Dame to Kill For” arrives on home video Tuesday, Nov. 18, as a 3D Blu-ray combo pack that includes the movie on Blu-ray 3D, Blu-ray, DVD and UV for $39.99, and as a standard single-disc DVD retailing for $29.98.

The movie’s box office take (less than $40 million worldwide) may have suffered because the sequel came out nine years after the first and somewhat better “Sin City” ($158 million worldwide), but there’s still enough good stuff here to be worth a return trip.

Both movies were co-directed by legendary comic book writer/artist Frank Miller, who created the original “Sin City” series of graphic novels, and Robert Rodriguez, who once again employs extensive green-screen technology to place actors in completely computer-generated neo-noir settings. The action is manically violent, the high-contrast black-and-white look (with isolated touches of color) is imaginatively stylish and the retro-gritty performances often border on straight-faced camp.

Screenplay writer Miller’s four interlocking stories include two adapted from the comics (“Just Another Saturday Night” and the title tale) and two new exploits from the murder-mad metropolis where “you go in with your eyes open, or you don’t come out at all.”

Mickey Rourke returns as “300 pounds of iron” Marv, a nearly superhuman killer who appears in all four stories. “There’s no reason to leave anybody alive,” he says before a vengeance-seeking home invasion. “Nobody’s innocent.”

Meanwhile, new card shark in town Johnny (an enjoyably enthusiastic Joseph Gordon-Levitt), foolishly ignores a corrupt cop who advises him not to win too much from the viciously sadistic Senator Roark (Powers Boothe).

The movie’s weak link is Jessica Alba, returning as exotic dancer Nancy Callahan, who wants revenge on Roark for causing the suicide of her lover and protector John Hartigan (Bruce Willis, appearing here in “Sixth Sense”-specter mode). Her character doesn’t seem even tongue-in-cheek credible, and her dancing lacks anything resembling the entrancing eroticism required by the role. Also, Alba’s refusal to disrobe in these films means that Nancy, who always is topless in the “Sin City” comics (and likewise in Miller’s illustration of her that appears during this movie’s opening credits), and who is supposed to be the star attraction at an extremely-bad-part-of-town dive, always keeps her naughty bits completely covered. The fact that Green’s character Ava is flagrantly nude in multiple scenes, and that Dwight at one point uses a line from the comics to describe Nancy as “showing off everything she’s got,” makes it ridiculous that Alba’s Nancy never reveals anything more than she could get away with displaying at a church pool party.

The home video extras (which are the same on the Blu-ray and DVD releases) include an interesting feature on the movie’s literally eye-popping makeup effects by Greg Nicotero, the creative genius responsible for the deliciously disgusting zombies on “The Walking Dead.” There’s also a fun segment on the movie’s stunts, and short on-set profiles of the characters portrayed by Green, Alba, Brolin and Gordon-Levitt. There are no audio commentaries.

The strangest bonus offers viewers the odd novelty of being able to watch the entire movie in high-speed all-green-screen mode in less than 17 minutes, without any of the CGI backgrounds that were added later. It’s fascinating to see that virtually every set and background in the entire film was created by movie magic.