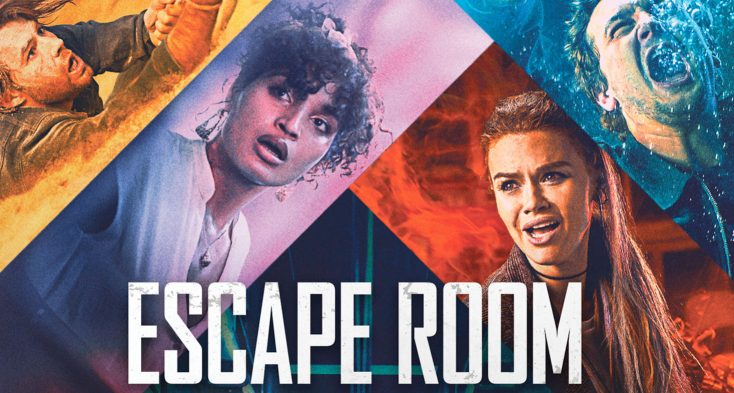 Turhan Bey stars as Alexis, a mystery man who claims to communicate with spirits. Appearing on the beach one night, Alexis easily charms a depressed widow (Lynn Bari) and her sister (Cathy O’Donnell). The sly Alexis makes a living by separating gullible people from their money, but before this tale is over, he will learn that the living are far more dangerous than the dead.

Featuring exceptional cinematography by John Alton, director Bernard Vorhaus delivers a film that oozes weird passion and sinister suspense. The film’s striking 4K restoration from original 35mm film elements and Bey’s performance as the debonair, yet lurking mystic, contributes to one of the most unforgettable film noir restorations to be released in recent years.

Special features include an audio commentary from professor and film scholar Jason A. Ney, a color booklet with essay, “The Amazing Mr. Bey,” by Don Stradley and “Mysteries Exposed: Inside the Cinematic World of Spiritualism,” an original documentary from Ballyhoo Motion Pictures

“The Awakening” will be available on Tuesday Oct. 5, from Cohen Media Group.

They say the boy was scared to death. When the death of a child at a boarding school is blamed on a ghost, hoax exposer Florence Cathcart is certain that science and reason can explain it. But the truth she discovers is more terrifying than she could ever imagine, and soon the ghost hunter becomes the hunted. Starring Rebecca Hall (“The Town”), Dominic West (“The Wire”) and Imelda Staunton (“Harry Potter” films), “The Awakening” is a terrifying mystery filled with haunting twists and turns up until the very end

Taylor Russell, Logan Miller, Indya Moore, Holland Roden, Thomas Cocquerel, Carlito Olivero star in this highly anticipated sequel to “Escape Room,” the box-office hit psychological thriller that terrified audiences around the world. In this installment, six people unwittingly find themselves locked in another series of escape rooms, slowly uncovering what they have in common to survive—and discovering they’ve all played the game before.

This never-before-seen Extended Cut reveals the masterminds behind Minos and features even more deadly escape rooms with over 25 minutes of all-new footage.

Directed by Adam Robitel from a story by Christine Lavaf and Fritz Bohm, the screenplay was written by Will Honley, Maria Melnik, Daniel Touch and Oren Uziel.

This fall, a cute little vampire and his endearing friends abound perfectly timed for Halloween. The new animated family feature “Little Vampire” will be available in a Blu-ray+DVD combo pack, as well as a standalone DVD from Shout! Kids in collaboration with StudioCanal Tuesday Oct. 5. Available for the first time on North American home entertainment shelves, the DVD and Blu-ray contain both the English and French audio tracks with English subtitles.

A fantastical adventure story that celebrates the importance of friendship and family, this entertaining film was nominated for a César Award for Best Animated Feature and a Cristal Award at the Annecy International Animated Film Festival.

“Little Vampire” has been 10 years old for the last 300 years. Despite living in a haunted house with a merry group of monsters, he is bored to death. His dream? Going to school to meet other kids. Unfortunately, his parents won’t let him leave the mansion, because they believe the outside world is way too dangerous! Accompanied by his trusted bulldog Phantomato, Little Vampire secretly sneaks out on a quest for new friends. He will soon meet a human boy, Michael, but their friendship will catch the attention of the terrifying Gibbus, an old enemy that has been chasing Little Vampire and his family for centuries.

Based on the PEN prize-winning novel, “A Naked Singularity,” by Sergio De La Pava, a former Manhattan District Attorney with first-hand knowledge of the everyday travesties of justice in city courtrooms, this genre-bending film is both an ambitious, razor-sharp indictment of legal dysfunction and an entertaining, high-stakes heist.

Casi (John Boyega, “Star Wars,” “Pacific Rim”) is a promising young New York City public defender whose idealism is beginning to crack under the daily injustices of the very justice system he’s trying to make right. Doubting all he has worked for and seeing signs of the universe collapsing all around him, he is pulled into a dangerous high-stakes drug heist by an unpredictable former client (Olivia Cooke) to beat the broken system at its own game.

Writer/director Chase Palmer’s award-winning short films “Neo-Noir” and “Shock and Awe” have played at film festivals around the world, including Sundance, BFI London, and Deauville. Palmer co-wrote “IT: Chapter 1,” the highest-grossing horror film in history.

This transformational journey is a manic mashup of two worlds that reveals just how far some parents will go to connect with their kids. When L.A. Lakers star player LeBron James and his young son Dom are trapped in a digital space by a rogue A.I., the basketball superstar must get them home safe by leading Bugs, Lola Bunny and the whole gang of notoriously undisciplined Looney Tunes to victory over the A.I.’s digitized champions on the court: a powered-up roster of professional basketball stars as you’ve never seen them before. It’s Tunes versus Goons in the highest-stakes challenge of his life, that will redefine LeBron’s bond with his son and shine a light on the power of being yourself. The ready-for-action Tunes destroy convention, supercharge their unique talents and surprise even James by playing the game their own way.

The eternal battle between vampires and Lycans gets upgraded when the “Underworld Limited Edition 5-Movie Collection” on 4K Ultra HD arrives Tuesday Oct. 5 from Sony Pictures Home Entertainment. This limited edition gift set marks the first time that fans will be able to experience all five “Underworld” films on 4K Ultra HD disc with High Dynamic Range and Dolby Atmos audio. The films also will be available digitally in 4K with HDR.

From the era of silent movies through present day, Universal Pictures has been regarded as the home of the monsters. “Universal Classic Monsters Icons of Horror Collection” showcases four of the most iconic monsters in motion picture history: Dracula, Frankenstein, The Invisible Man and The Wolf Man. Starring Bela Lugosi, Boris Karloff, Lon Chaney Jr. and Claude Rains in the roles that they made famous, these original films set the standard for a new horror genre with revolutionary makeup, mood-altering cinematography and groundbreaking special effects.

The Universality of it All (Documentary)

“The Universality of it All” arrives on DVD/Digital Tuesday Oct. 5, from Indiepix Films.

What connects us? The “Universality of it All” a feature-length documentary by Andres Bronnimann, explores this simple yet complex question with profound perspective and intimate detail.

Told through the lens of the filmmaker’s longtime friendship with Emad, a Yemeni refugee living in Vancouver, Bronnimann examines the subject of human migration and how it relates to such varied topics as climate change, colonialism, neoliberalism, globalization, identity politics, fertility rates, wealth gaps, trade wars, terrorism and the media. Taking viewers on a journey around the world, the film analyzes various cases of migration using both an economic and historical viewpoint, arriving at the realization of our shared interconnectedness amidst the major events of the 21st century.

With only a camera and a computer, Bronnimann hopes through his film to inspire young people across the globe to see the connections that all global and local issues have.

Bonus features include a commentary by the filmmaker and the official trailer. “The Universality of it All” on DVD/Digital will be available for $24.95 (SRP).

When a bank heist in the city doesn’t all go according to plan, José and Tony find themselves in possession of some hostages and speeding through the mountains of Spain, hoping to quietly slip over the border. Not wanting to give up his custody days to his ex-wife, José has also brought his son along for both the robbery and the ride. Little do they know that this is only the beginning of their troubles, as they soon make a stop in a small tavern in the Basque countryside and find themselves the honored guests of a fractured family of witches who are preparing for an ancient ritual. Director Alex de la Iglesia (“As Luck Would Have It,” “The Last Circus”) serves up laughs, action and thrills in this visually inventive comedy that builds towards a jaw-dropping climax with plenty of scares and surprises along the way.

In Victorian England, a gang of women suddenly manifest unusual supernatural powers and find themselves on a mission that may very well change the world, in HBO’S science fiction period drama “The Nevers: Season 1, Part 1,” to be released on Blu-ray and DVD Tuesday Oct. 5, from Warner Bros. Home Entertainment.

Nominated for an Emmy Award, “The Nevers: Season 1, Part 1” features six one-hour episodes from the series’ first season, plus over two hours of bonus features including two all-new exclusive featurettes.

In 1896, Victorian London is rocked to its foundations by a supernatural event which gives certain people—mostly women–abnormal abilities, from the wondrous to the disturbing. But no matter their particular “turns,” all who belong to this new underclass are in grave danger. It falls to mysterious, quick-fisted widow Amalia True (Laura Donnelly) and brilliant young inventor Penance Adair (Ann Skelly) to protect and shelter these gifted “orphans.” To do so, they will have to face the brutal forces determined to annihilate their kind.

Here’s a giveaway that fans of horror can really sink their teeth into. Front Row Features is giving away one copy of  “Universal Classic Monsters Icons of Horror Collection” on 4K Ultra HD, Blu-ray and Digital Code to one lucky winner. To enter this contest, simply email frontrowfeatures@gmail.com by Oct. 13. Good luck!