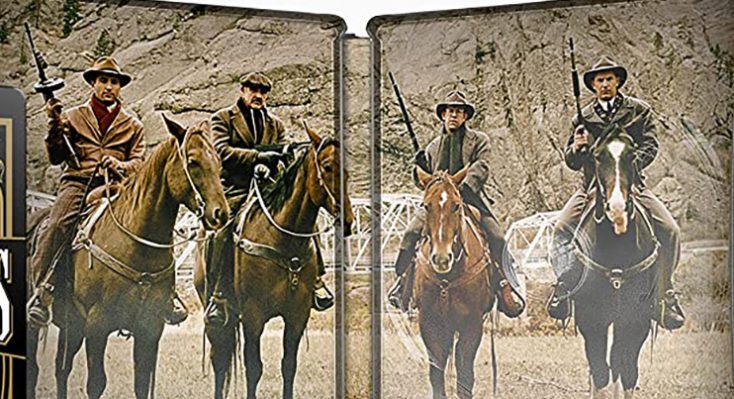 Has dialogue ever been more perfectly hard-boiled? Has a femme fatale ever been as deliciously evil as Barbara Stanwyck? And has 1940s Los Angeles ever looked so seductively sordid? Working with cowriter Raymond Chandler, director Billy Wilder launched himself onto the Hollywood A-list with this paragon of film-noir fatalism from James M. Cain’s pulp novel.

When slick salesman Walter Neff (Fred MacMurray) walks into the swank home of dissatisfied housewife Phyllis Dietrichson (Stanwyck), he intends to sell her insurance, but he winds up becoming entangled with her in a far more sinister way. Featuring scene-stealing supporting work from Edward G. Robinson and the chiaroscuro of cinematographer John F. Seitz, “Double Indemnity” is one of the most wickedly perverse stories ever told and the cynical standard by which all noir must be measured.

This Criterion Collection edition includes a new 4K digital restoration with uncompressed monaural soundtrack, a 4K UHD disc of the film presented in Dolby Vision HDR and two Blu-ray discs with the film and special features, an audio commentary featuring film critic Richard Schickel, an interview with film scholar Noah Isenberg, editor of “Billy Wilder on Assignment,” a conversation between film historians Eddie Muller and Imogen Sara Smith, audio excerpts from 1971 and 1972 interviews with cinematographer John F. Seitz, “Billy, How Did You Do It?,” a 1992 film by Volker Schlöndorff and Gisela Grischow featuring interviews with director Billy Wilder, and more.

The hilarious and inspiring classic “Kinky Boots” arrives for the first time ever on Blu-ray Tuesday May 31, from Paramount Home Entertainment.

Featuring a Golden Globe-nominated performance by Chiwetel Ejiofor (“Doctor Strange in the Multiverse of Madness”), as well as memorable performances by Joel Edgerton (“The Green Knight”), Sarah-Jane Potts (“The Chameleon”) and Nick Frost (“Shaun of the Dead”), the comedy is a refreshing, feel-good film that proves the best way to fit in is to stand out.

The film was inspired by the real-life story of a family-owned shoe factory in England and ultimately inspired a Broadway musical that earned six Tony Awards, including Best Original Score, Best Actor and Best Musical.

For generations, the Price family has made very sensible, very conservative shoes for men. But to save the business from imminent bankruptcy, young Charlie Price (Edgerton) turns to an unlikely new creative consultant: a fabulous drag performer (Ejiofor) whose creative style and wild designs are a breath of fresh air in the stuffy old factory.

The “Kinky Boots” Blu-ray features access to a digital copy of the film and legacy bonus content including audio commentary with the director and members of the cast, deleted scenes and behind-the-scenes featurettes.

The acclaimed “Poupelle of Chimney Town” will be available in a Blu-ray + DVD combo pack starting Tuesday May 31, from Eleven Arts and Shout! Factory.

Based on the popular Japanese picture book by celebrated author and creator Akihiro Nishino, the fantastical tale of Lubicchi and Poupelle leaps from the pages to the screen.

Directed by Yusuke Hirota and produced at Tokyo’s famed Studio4oC, “Poupelle of Chimney Town” brings to life a unique and inspiring tale about friendship, courage, hope and perseverance to reach for the stars through an awe-inspiring adventure filled with whimsical characters, stunning animation and unforgettable performances.

The combo pack contains the movie presentation in both an English audio and Japanese audio with English subtitles, insightful bonus content and an exclusive art booklet with a special message form the executive producer and creator Akihiro Nishino.

“Poupelle of Chimney Town” also is available now on Premium VOD and on Digital.

Terror is in the air when several flight passengers suddenly suffer gruesome, unexplained deaths in the spine-tingling Russian thriller “Row 19.” The horror movie lands on Blu-ray, DVD and Digital Tuesday May 31, from Well Go USA Entertainment.

After the unexplained deaths begin to occur, a young doctor on board begins to suspect that the shadowy, terrifying force behind her own worst childhood nightmare may be back for blood.

Celebrate the 50th anniversary of “1776,” a musical celebration of the founding of the United States of America, available for the first time on 4K Ultra HD (plus Blu-ray and a Digital copy) Tuesday May 31, from Sony Pictures Home Entertainment.

Based on the award-winning Broadway production, the film centers on the tough and unyielding Founding Fathers: John Adams (William Daniels), the charming and pragmatic Benjamin Franklin (Howard Da Silva), the brilliant young Thomas Jefferson (Ken Howard) and the rest of the Continental Congress, during that pivotal lead-up to the most significant historical date in U.S. history, July 4, 1776.

of the film as well as a limited sleeve featuring theatrical artwork. Both versions are presented in high definition (HD) with 5.1 audio.

The 1972 theatrical version of the film, presented in HD with original mono audio, and the 1992 laserdisc version, presented in standard definition (SD) with stereo audio as well as archival commentary by Hunt, are on the Blu-ray disc.

Nominated for four Academy Awards, the film originally was released on June 3, 1987.  Robert De Niro (“The Godfather: Part II,” “Goodfellas”) stars as mob boss warlord Al Capone and Kevin Costner (“Field of Dreams,” “For Love of the Game”) as law enforcer Eliot Ness in this fierce, larger-than-life depiction of good versus evil on the streets of Prohibition-era Chicago.

Sean Connery won his only Oscar for his portrayal of veteran officer Jimmy Balone in this blockbuster hit that was the fourth highest grossing film of 1987. Written by David Mamet, “The Untouchables” also contains the Grammy winning score by legendary composer Ennio Morricone.

“The Untouchables” will be available on 4K UHD and in a 4K Ultra HD 35th Anniversary SteelBook with a Dolby Atmos soundtrack and access to a Digital copy of the film. The discs include more than an hour of legacy bonus content in high definition (HD) such as the original featurette about the men depicted, production stories and more.

“The Boys: Season 1 & 2 Collection” comes to Blu-ray and DVD Tuesday May 31, from Sony Pictures Home Entertainment.

“The Boys” is an irreverent take on what happens when superheroes—as popular as celebrities, as influential as politicians and as revered as gods—abuse their superpowers rather than use them for good. The series stars Karl Urban, Jack Quaid, Antony Starr, Erin Moriarty, Dominique McElligott, Jessie T. Usher, Laz Alonso, Chace Crawford, Tomer Capone, Karen Fukuhara, Nathan Mitchell, with Elisabeth Shue, Colby Minifie and Aya Cash.

In Season 1, it’s the powerless against the super-powerful as The Boys embark on a heroic quest to expose the truth about “The Seven” and their formidable Vought backing.

In a more intense Season 2, Butcher, Hughie and the team are reeling from their losses. On the run from the law, they struggle to fight back against the superheroes. Meanwhile, Vought, the hero management company, cashes in on the panic over supervillains; and a new hero, Stormfront, shakes up the company and challenges an already unstable Homelander.

In the fifth season, secrets are revealed as Lucifer makes a tumultuous return from Hell. Chloe rethinks romance, Ella finally finds a nice guy and Amenadiel adjusts to being a father. All 16 episodes of the season comprise each of the box sets.

In the first half of the season, Lucifer’s twin brother, Michael, secretly takes the devil’s place on earth while he’s back in Hell. Eventually Lucifer must face themes his brother made with his life. He’ll also finally confront his feelings for Chloe and answer a question that fans of the series have been asking since the very beginning: Will they or won’t they?

In the second half of the season, God makes his grand appearance. Except, Lcifer never prayed for this, and he already can’t wait to send dear old “Dad” back where he came from.

Unfortunately for Lucifer, God isn’t going anywhere, and wants to get into every aspect of Lucifer’s life. The protagonists discover that God has returned for more than just some family bonding time.

Bonus content include deleted scenes and a gag reel.

Based on characters from DC created by Neil Gaiman, Sam Kieth and Mike Dringenberg, “Lucifer is produced by Jerry Bruckheimer Television in association with Warner Bros. Television.

“Lucifer: The Complete Fifth Season” on DVD will be available for the suggested retail price (SRP) of $29.98 ($39.99 in Canada). The fifth season also is available now on Digital platforms.

Front Row Features is giving away a copy of “Row 19” on Blu-ray to three lucky readers brave enough to watch the terrifying thriller. To enter the contest, simply email socalmovieeditor@aol.com by June 6 for your chance to win. Good luck!