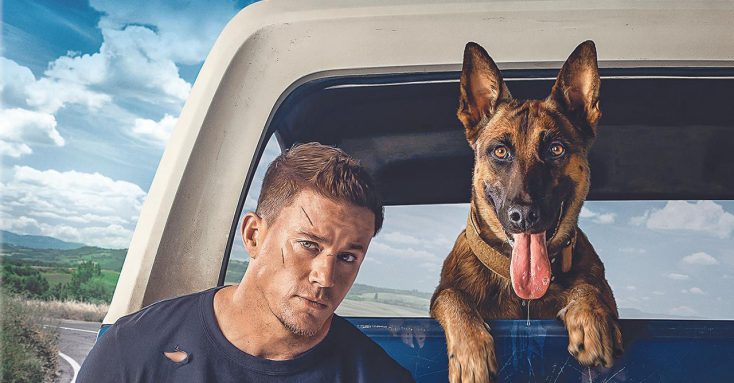 RLJE Films, a unit of AMC Networks, will release the action crime-thriller “Clean” on DVD and Blu-ray Tuesday May 10. The home entertainment release follows IFC Films’ release of the film in theaters, on Digital Rental and VOD earlier this year.

Tormented by his past life, garbage man Clean (Adrien Brody, “The French Dispatch,” “Succession”) attempts a life of quiet redemption. But when his good intentions mark him as a target of a local crime boss (Glenn Fleshler, “Joker,” “Billions”), Clean is forced to reconcile with the violence of his past.

The heartwarming buddy comedy “Dog” arrives on Blu-ray and DVD Tuesday May 10, from Warner Bros. Home Entertainment. It also is available now on Digital from MGM.

“Dog” is a buddy comedy that follows the misadventures of two former Army Rangers paired against their will on the road trip of a lifetime. Army Ranger Briggs (Channing Tatum, “Magic Mike” franchise) and Lulu (a Belgian Malinois dog) buckle into a 1984 Ford Bronco and race down the Pacific Coast in hopes of making it to a fellow soldier’s funeral on time. Along the way, they’ll drive each other completely crazy, break a small handful of laws, narrowly evade death and learn to let down their guards in order to have a fighting chance of finding happiness.

Now available on Blu-ray is the French drama “Gagarine,” from Cohen Media Group.

Yuri, 16, has lived all his life in Gagarine Towers, a vast red brick housing project on the outskirts of Paris. From the heights of his apartment, he dreams of becoming an astronaut. But when plans to demolish his community’s home are leaked, Yuri joins the resistance. With his friends Diana and Houssam, he embarks on a mission to save Gagarine, transforming the estate into his own “starship.”

“Indemnity” will be available on Blu-ray, DVD and On Demand Tuesday May 10, from Magnolia Home Entertainment under the Magnet Label.

Directed by Travis Taute, the action/thriller follows a South African ex-firefighter in Cape Town who is forced to fight for his life after being accused of murdering his wife. As he struggles to survive, connections are revealed between his past, the origin of his PTSD, the mysterious death of his wife and a government conspiracy with terrifying implications.

In this debut feature by writer/director Laura Wandel, the everyday reality of grade school is seen from a child’s point-of-view as an obstacle course of degradation and abuse. Following seven-year-old Nora and her big brother Abel, viewers see Nora trying to fit in before finding her place in the schoolyard.

One day, she notices Abel being bullied by other kids and though she rushes to protect him by warning their father, Abel forces her to remain silent, while he endures more humiliation and harassment by his peers.

Transposing the gritty realism of such filmmakers as Jacques Audiard and the Dardennes brothers to the inner world of kids, Wandel crafts an empathic and visceral portrait of the cruelty of children, and their failure of adults to protect them.

“Playground” is in French with English subtitles and will be available on DVD/Digital for $24.95 (SRP).

An elderly Tai Chi master struggles to adapt to life in the West in Oscar winning director Ang Lee’s acclaimed debut film “Pushing Hands,” which is presented in a new 2K restoration on Blu-ray, DVD and Digital Tuesday May 10, from Film Movement Classics.

Having just moved from Beijing, elderly tai chi master Mr. Chu (Sihung Lung) struggles to adjust to life in New York, living with his Americanized son Alex (Ye-tong Wang). Chu immediately butts heads with his put-upon white daughter in law, Martha (Deb Snyder,), a writer who seems to blame him for her own paralyzing inability to focus. But when Chu begins teaching tai chi at a local school, his desire to make a meaningful connection comes to fruition in the most unexpected of ways.

Present in a stunning new 2K restoration, “Pushing Hands” is the first film in Lee’s “Father Knows Best” trilogy, which depicts the tensions between the traditional Confucian values of the older generation and the realities of modern life.

The film is in Mandarin and English with English subtitles.

Street-smart thief Nathan Drake (Tom Holland, “Spider-Man: No Way Home”) is recruited by seasoned treasure hunter Victor “Sully” Sullivan (Mark Wahlberg, “Three Kings”) to recover a fortune lost by Ferdinand Magellan 500 years ago. What starts as a heist job for the duo becomes a globe-trotting, white-knuckle race to reach the prize before the ruthless Moncada (Antonio Banderas, “Puss in Boots”), who believes he and his family are the rightful heirs. If Nate and Sully can decipher the clues and solve one of the world’s oldest mysteries, they stand to find $5 billion in treasure and perhaps even Nate’s long-lost brother, but only if they can learn to work together.

Bonus materials on the 4K UHD, Blu-ray and Digital include deleted scenes, behind-the-scenes featurettes and a commentary with director Ruben Fleischer. The DVD contains a featurette called “The Buddy System.”

Year of the Jellyfish (Drama)

“Year of the Jellyfish” washes ashore on Blu-ray Tuesday May 10, from Cohen Film Collection.

This French Eurotrash cult classic is set in Saint Tropez during mid-summer. It is a darkly biting coming-of-age story that tells the tale of obsession and sexual desire. A young woman (Valerie Kaprisky) vacations in an upscale beach resort with her mother, where it becomes clear that a layer of secrets and jealousy lay beneath the sun-drenched paradise.

Directed by Christopher Frank, “Year of the Jellyfish” initially was released in 1984. Alongside Kaprisky, the film also stars Caroline Cellier, Bernard Giraudeau and Jacques Perrin.

RLJE Films, a unit of AMC Networks, will release Season 1 of the drama series, “Kin,” on DVD and Blu-ray Tuesday May 10. The series premiered on AMC+ last September.

In the debut season, a boy is killed and his family embark on a gangland war with an international cartel— a war that is impossible to win. But the Kinsellas have something the cartel does not: the unbreakable bonds of blood and family.