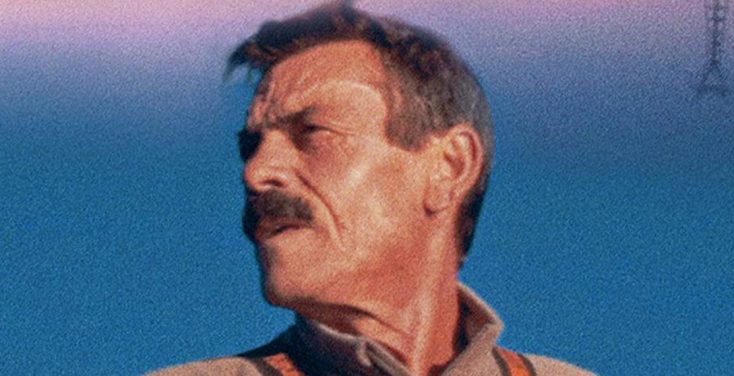 Charming and ambitious art critic, James Figueras (Claes Bang), has fallen from grace. He spends his days in Milan lecturing witless tourists about art history. His only glimmer of hope is a new-found love interest, the enigmatic American, Berenice Hollis (Elizabeth Debicki). An opportunity strikes when he is contacted by the wealthy art dealer Joseph Cassidy (Mick Jagger) who summons James to his villa on Lake Como and asks him to steal a painting from the legendary reclusive artist, Jerome Debney (Donald Sutherland). Soon, James’ greed and ambition get the better of him, and he finds himself caught in a web of his own making.

The Blu-ray, DVD and Digital include a commentary with director Giuseppe Capotondi and a behind-the-scenes featurette with stars Claes Bang and Elizabeth Debicki exploring their complex, absorbing characters, Mick Jagger’s unnerving turn as Cassidy in his first film role in nearly 20 years and the perfectly cast Donald Sutherland as the reclusive artist at the heart of the film.

“Einstein’s Universe” will be available on Blu-ray, DVD Combo Pack as well as Digital Tuesday Aug. 25, from Corinth Films.

Based on Nigel Calder’s bestselling book of the same name, this fascinating documentary has been digitally remastered and restored to deliver Einstein’s greatest achievement to home audiences.

Narrated by the charismatic Peter Ustinov and hosted by author Calder, “Einstein’s Universe” was first broadcast on the centenary of Albert Einstein’s birth; March 14, 1979. In the joint BBC/WGBH-produced program, Ustinov gives home audiences front row seats to scientific theory and history at the renowned University of Texas-Austin McDonald Observatory. There, he is thoroughly enlightened on Einstein’s greatest achievements, especially General Relativity, by a renowned team of scientists.

Included are experiments to help understand gravity, warped space, how light responds to gravity, the “Doppler effect” and how radio waves, as used in police radar, are an unbeatable way of measuring speed. From these simpler experiments, much larger concepts are drawn, such as the discovery of a Binary Pulsar, the nature of black holes and how they are created, and the ultimate theory of how the universe was formed. Other demonstrations measure the speed of light, how time passes more slowly for people traveling in an airplane, the incredible accuracy of the Atomic Clock in Washington, D.C. and how time itself would appear to stop at the surface of a black hole.

An amiable Portuguese slacker takes a one-way trip to Cape Verde to discover his roots in an African Odyssey in “Djon África,” arriving on DVD and Digital Tuesday Aug. 25, from IndiePix Films.

Miguel (Miguel Moreira), a.k.a. Djon África, a likeable aspiring musician with a knack for smooth talk, is coasting listlessly through a life of construction work, petty shoplifting and womanizing in Portugal. After coming into a little money, he impulsively decides to find his roots on the islands of Cape Verde, off Africa’s northwest coast, in search of his father. Though he identifies as African, he’s never visited. All he knows is what his grandmother has told him: that, long ago, his father was deported to Cape Verde.

Once in the capital, Praia, however, Miguel hits a dead end when he learns the aunt he was hoping would help him has been dead for a year. With vague information about some relatives who live in another town, he sets off across the island. But soon, the locals and their ways, especially the consumption of grogue, a powerful rum-based liquor, weaken his resolve, and he begins to give himself over to the island’s rhythms, immersing himself in a deeply pleasurable African odyssey brimming with colorful characters, boozy encounters and some requisite soul-searching.

The debut scripted feature by Portuguese documentarian duo Filipa Reis and João Miller Guerra, the film stars non-professional actor Moreira who appeared in the pair’s 2010 DocLisboa winner, “Li Ké Terra.”  With an array of prickly locals and the pictorial beauty of Cape Verde serving as its backdrop, “Djon África,” a laid back picaresque road trip, is a breezy, grogue-fueled delight.

A festival favorite around the world, “Djon África” has earned accolades from audiences and critics alike.

The King of Staten Island

“The King of Staten Island,” a moving comedy inspired by “SNL” star Pete Davidson’s true-life story, is available to own on Blu-ray and DVD Tuesday Aug. 25, from Universal Pictures Home Entertainment. It also is available on Digital.

Scott (Davidson) has been a case of arrested development ever since his firefighter father died when he was seven. He’s now reached his mid-20s having achieved little, chasing a dream of becoming a tattoo artist that seems far out of reach. As his ambitious younger sister (Maude Apatow) heads off to college, Scott is still living with his exhausted ER nurse mother (Oscar-winner Marisa Tomei) and spends his days smoking weed, hanging with his buddies and secretly hooking up with his childhood friend Kelsey (Bel Powley). When his mother starts dating a loudmouth firefighter (Bill Burr), it sets off a chain of events that will force Scott to grapple with his grief and take his first tentative steps towards moving forward in life.

One Night in Bangkok

“One Night in Bangkok” arrives on DVD, Digital, and On Demand Tuesday August 25, from Lionsgate.

Starring legendary martial arts actor and television personality Mark Dacascos (“John Wick: Chapter 3—Parabellum”) and from action filmmaker Wych Kaosayananda, director of “Ballistic: Ecks vs. Sever” and “The Driver,” this intense, action-packed hitman thriller revolves around an assassin who hires a cab driver to unknowingly escort him to each of his targets.

Hitman Kai flies into the Thailand capital city, gets a gun, and orders a cab. He offers a professional female driver big money to be his all-night driver. But when she realizes Kai is committing brutal murders at each stop, it’s too late to walk away. Meanwhile, an offbeat police detective (Kane Kosugi, “Tekken: Kazuya’s Revenge”) races to decode the string of slayings before more blood is spilled.

In an ancient riverfront village outside of present-day Lisbon, a fisherman inhabits both the solitude of the river and the shared routines of family life that rhythmically bring him ashore in “Terra Franca,” the first feature-length documentary from Leonor Teles, part of a new generation of Portuguese filmmakers and the youngest ever recipient of the Berlin Golden Bear for Best Short Film in 2016.

Winner of the Scam International Award at the 2018 Cinéma du Réel Int’l Documentary Film Festival, “Terra Franca,” a hybrid of reality and fiction. documents a year in the life of Albertino Lobo, a fisherman in the town of Villa Franca. A gruff man of few words and many solitary silences, the camera follows the fisherman as he crosses the Tagus River in search of a catch. From work-filled everyday life to fancy boat parades, this also introduces home audiences to Alberto’s family, as they prepare for his daughter’s wedding, which entails affectionate celebrations as well as domestic tiffs, while an accidental violation of arbitrary fishing regulations threatens to take away his livelihood. Teles’ meditative, meticulous portrait, shot over two years, opens up a sliver of Portuguese society and its inhabitants, with all their aspirations, tensions and joys.

The Trip to Greece

While traveling to Europe is out of the question this summer for Americans, the next best thing could be watching this road trip comedy “The Trip to Greece,” available on Blu-ray and DVD Tuesday Aug. 25, from IFC Films.

When Odysseus left Troy it took him 10 years to get back to his home in Ithaca. Steve (Steve Coogan) and Rob (Rob Bryson) have only six days on their own personal odyssey in Michael Winterbottom’s “The Trip to Greece.” On the way, they argue about tragedy and comedy, astronomy and biology, myth, history, democracy and the meaning of life.

Featuring locations including the Temple of Apollo at Delphi, the Ancient Agora of Athens, the Ancient Theatre of Epidaurus, the unique island of Hydra, the caves of Diros, Nestor’s Palace, the Niokastro fortress in Pylos, and ancient Stagira, as well as a lot of shooting in restaurants and hotels in Athens, Hydra, Lesvos, Chalkidiki, Pelion, Kavala and at the Peloponnese.

Memorial photographer Brock Blennerhasset (Michael Smiley, “Luther”) makes a living out of photographing the dead in Victorian Ireland. When a series of murders threatens to sully Blennerhasset’s reputation, a tenacious detective drags him into an investigation of Dublin’s criminal underbelly.  Ker Logan (“Game of Thrones”) plays Conall Molloy Blennerhasset’s loyal assistant as they visit grieving families for photo assignments. Meanwhile, a tenacious detective investigates a series of local murders and eyes possible disturbing connections between them and the photographer. The two-disc DVD includes a 63-minute behind-the-scenes featurette.

Having originally premiered in May on Acorn TV, the six-episode series is available for $39.99 (SRP).

Calling all Pete Davidson fans! Front Row Features is giving away a copy of the heartfelt comedy inspired by the “Saturday Night Live” star’s own true-life story, “The King of Staten Island,” on Blu-ray/DVD Combo Pack to one lucky reader. For your chance to win the contest, simply email socalmovieeditor@aol.com by Aug. 31 and tell us what your favorite “SNL” segment has been over the years that featured Davidson. Good luck!