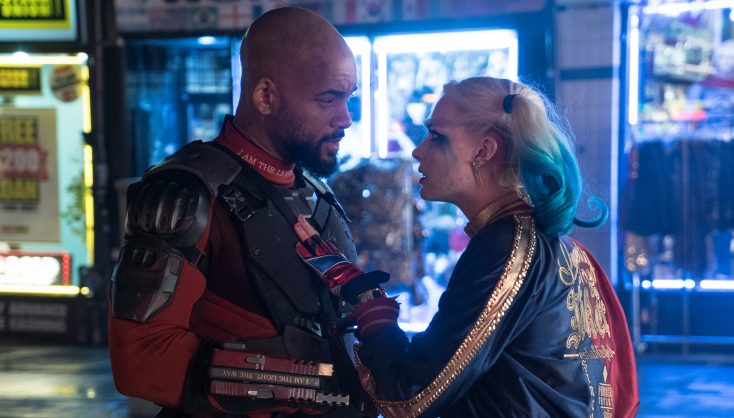 NEW YORK—“Suicide Squad” brings a lot of A-list actors together to play hardened criminals that are recruited by a high-ranking government intelligence officer to embark on a dangerous mission. If they comply, they get time off their lengthy sentences; if they don’t, they die.

Based on a DC Comics storyline, Will Smith and Margot Robbie, who co-starred in last year’s heist caper “Focus,” reteam as two of the most lethal members of the team. Smith plays Deadshot, a hitman who is extremely accurate while Robbie plays the sexy but deadly delinquent Harley Quinn, whose preferred weapons are a baseball bat, a handgun and her very flexible body to dispatch her opponents. Her one soft spot is for the manipulative Joker, played by Oscar winner Jared Leto (“Dallas Buyers Club”), who with his scaly goons is intent on busting Harley out of her maximum-security prison cell. The explosive action movie is written and directed by David Ayer, whose previous writing/directing credits include 2014’s “Sabotage” and “Fury.”

Smith, Robbie and Leto recently spoke at a press conference about playing these comic book antiheroes.

Q: What is it like bringing these characters to the screen and balancing them with what comic book fans already know with what you wanted to bring to the characters?

Leto: For me it was actually the role of a lifetime. I had so much fun playing The Joker. I could easily just play The Joker a couple of more times and retire. (To Will Smith and other members of the squad) It was a blast but you guys seemed like you were having all the fun on the movie.

Smith: We were really enjoying it. David Ayer has a very interesting process of getting actors into their characters.

Smith: Manipulation, domination, torture, yeah. We all got in a room and had, essentially, more like therapy than it was character creation so we sat and talked about our lives and got really close with our triumphs and tribulations and trials.

Q: Were there any injuries or mishaps on set during filming?

Robbie: Some mild injuries, Will?

Smith: When you’re 47 no injury is a minor injury anymore. I tore my calf a couple of weeks in and what is terrible is you do it doing nothing. We’re sparring and I step back to throw a shot and my calf popped and people could hear it and everybody’s like “Ohhh, that’s not good. Whatever that sound was, it’s not a good sound. Then the doctor told me I was down for six weeks. On a movie like this, six weeks can click off a significant amount of money and I wasn’t going to pay for it. It was really scary to be in that position. I was like “Oh my God, I have this opportunity, “Suicide Squad,” having this chance,’ and maybe not being able to deliver the way I wanted to.

(To Margot) What was the hardest thing you had to do? Everything we had to do except you did it in heels.

Robbie: Yes, that was tricky and I had less layers to hide padding doing stunts so that made it a little painful. I thought I broke my rib at one point but actually tore the muscles instead of breaking it but it was fine. It was towards the end. I fell off the stage the other day in Toronto and popped up, “That didn’t hurt.” The hardest part wasn’t the physical side. That’s the mechanical side and it’s challenging but it’s rewarding and fun. The emotional stuff was definitely more difficult, exposing my most vulnerable sides in front of a roomful of strangers at that point. That was incredibly hard and trying to figure out the dynamic between Harley and Joker and why she is so devoted to this guy that tries to kill her occasionally. A few things like that it took a lot to get my head around but the physical side was just more fun than challenging.

Q: Can you talk about bringing humanity and humor into all the mayhem for this?

Leto: David (Ayer, the director) was really great because from the beginning it was clear he wanted to do something different and special. He wanted to make something that we’d all be really proud of. I got the sense from him that he was willing to go to all lengths in order to get that was a little scary but also really exciting. He’s not only the director but also the writer of the film. I was surprised by how much freedom he gave everybody to just go completely ******* crazy. What I thought was really genius about David is he was always looking for the accident, the mistake and embracing that. For Margot and I, there was a lot of humor, a lot of things that I thought were really funny in a really sick and twisted way. He was really wonderful in that way.

Q: Will, Adewale Akinnuoye-Agbaje (“Pompeii”) is almost unrecognizable as the animal-like Killer Croc on your squad. What was it like working with him?

Smith: He took it very serious. He was watching crocodile videos and cannibalism and all that.

Q: Margot, how did you create more of a backstory and emotional base for your character?

Robbie: It was more like filling in the gaps because we had an amazing resource with the comic books but there are little gaps in the backstory and things you need to fill in yourself. I watched a couple of talks on schizophrenia amongst a lot of other things but that really helped because the women that were doing these talks were so intelligent. They were professors and Harley needs to be wickedly intelligent but also kind of psychotic, so those were helpful. I also got recommended to read a play called “All for Love,” about this really dysfunctional relationship and that, for some reason, helped me to unlock the whole feeling toward the Joker. Some things hit home when you are doing all your research and some don’t but it really helped.