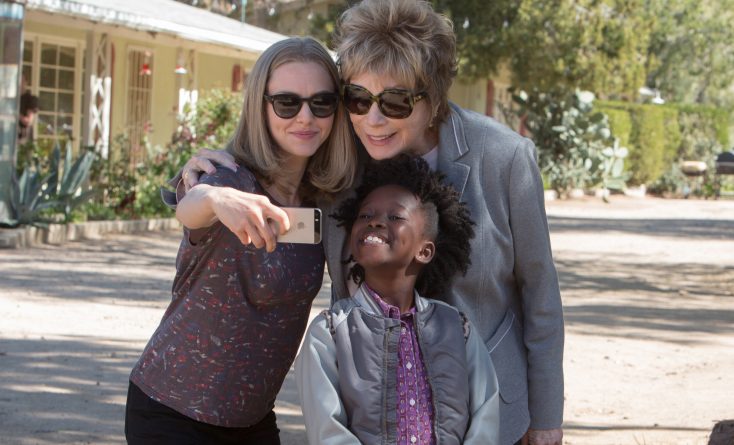 HOLLYWOOD—Shirley MacLaine, the venerable Oscar winning actress (“Terms of Endearment”), bestselling author and possible reincarnate, was in the audience at the 2017 Academy Awards when her kid brother and fellow Oscar winner, Warren Beatty, got caught up in the snafu involving the incorrect announcement of the Best Picture winner.

While the always outspoken actress was reluctant a few weeks later to comment on that series of unfortunate events that led up to the embarrassing error, she recalled another moment from the show when she and Oscar winner Charlize Theron were onstage to present the Best Foreign Language film. The winner, Iranian filmmaker Asghar Farhadi, had boycotted the show to draw attention to his opposition to President Trump’s travel ban on citizens of certain middle Eastern and African countries. Picking up the Oscar statuette on his behalf was Anousheh Ansari, the first Iranian and first Muslim woman to travel to space, along with Firouz Naderi, a former NASA director originally from Iran. MacLaine, who believes in reincarnation and extra-terrestrials explained during an interview that one thought crossed her mind while she was standing onstage with Farhadi’s surrogates.

“If I had had a moment and had the courage, I would have asked them, “Excuse me, can you introduce me to an extra-terrestrial?,” she recalls in her deadpan way. “I was waiting for that moment, and then I thought, ‘No, this is too important.’”

At 82, the divorced Virginia native who now makes her home in New Mexico, is still the saucy spitfire she was when she was 20 and making her big screen debut in Alfred Hitchcock’s “The Trouble With Harry.” Her beliefs in reincarnation, UFOs and New Age spirituality used to make some nonbelievers snicker. Now, MacLaine’s views seem almost mainstream in comparison to other celebrities’ out-there philosophies.

Feisty in an endearing way, MacLaine spoke about her newest film, “The Last Word,” in which she plays a once successful businesswoman who has alienated most of the people in her life, including her only daughter (played by Anne Heche). Harriet enlists a young writer from the local newspaper to prepare her obituary while she’s still alive. Dissatisfied with the whitewashed draft, the octogenarian sets out to redefine herself by doing some good deeds, repairing relationships and settling old scores.

She does so by dragging along the in-a-rut writer, Anne (“Mamma Mia!’s” Amanda Seyfried) as well as a precocious youngster they meet (played by newcomer Ann’Jewel Lee). The dramedy is directed by Mark Pellington (“Henry Poole is Here”) from a screenplay by Stuart Ross Fink. With her new female friends in tow, Harriet sets out to reinvent herself, or at least correct the perception of those who know her, before it’s too late.

Q : Since this film is about a woman coming to terms with her legacy, have you thought about your own legacy and how you would like people to remember you?

MacLaine: You want to know what my obituary is going to say?

Q: Allow me to put it another way: What do you consider to be your greatest accomplishment?

MacLaine: I don’t know, but I just figured out what I want my obituary to say: “You think I’m dead, but I’m not.” (She laughs.) I don’t know. What do you do about legacy? You leave it alone. You try to do your best. Right now, you hope you get financing and you just look for great scripts, in terms of working. In terms of my life? (She sighs) I guess to share whatever I learned, really, which is basically one thing: Know yourself (and) look for yourself. Know what to look for, share it. Be honest; be authentic, even if it hurts your feelings.

Q: What’s the biggest risk you’ve taken in your career and in your life?

MacLaine: I would say that the biggest risk I always take is going in front of a live audience. There is nothing riskier to do, so you have to really leave yourself open to your own authenticity and you find that out pretty quick. In terms of a life or death risk, I don’t have an answer. Can’t think of it. I went to Broadway when I was 16. I didn’t consider it a risk. I thought it was probably what I should do. I think like a dancer, that nothing is a risk. It’s more that what I think I should do, therefore you don’t define it as a risk. I still don’t consider anything I would do a risk. Jumping out of an airplane I wouldn’t do, so therefore I’m not going to risk it.

Q: There are many beautiful photos of you throughout your life and career that are shown at the beginning of the movie. Do you see yourself as a trailblazer? How do feel about women’s roles in the movies? And did Marlon Brando actually get you into politics while you were frying an egg?

MacLaine: Oh my goodness. Yeah, someone asked me last night who I wanted to work with, and that’s who. I want Marlon to appear and I want to work with him. I want to see what that kind of improvisation is like. I was named after (1930’s child star) Shirley Temple, so I keep in mind always that I was named after a movie star. I have to basically consider both sides of the road. I was just thinking, another point of view that I have about risk-taking is, I’m naive. I’m very aware, but I’m very naive, and so when you are really naive and expecting safety and expecting the best, you don’t feel you’re taking risks. You can get smacked a little, but usually it works out pretty well, so I would say that as much as you can instill your open-minded naiveté, and basically stay open-minded.

Q: When you first came to Hollywood, was there somebody of another generation who took you under his or her wing and gave you valuable advice that you were able to draw on at the beginning of your career?

MacLaine: Yeah, the first person who comes to mind is Joan Crawford, and I didn’t listen to a thing she said. Thank God, really.

Q: How did you meet her?

MacLaine: Oh, you don’t want to hear this. What can I say? Since “Feud” is (airing on FX) she… (makes a motion of zipping her lip).

Q: Watching this movie got me thinking about how we treat the elderly people, and it took me back to Sunday and the Academy Awards and what happened with your brother, Warren Beatty and the confusion with the Best Picture card. A lot of people initially, instinctively said, “Oh, what did Warren do?” It felt a little ageist, and I wanted to hear your perspective. Is Hollywood ageist? What is your take on the whole thing?

MacLaine: I don’t know if what happened at the Oscars has to do with ageism.

Q: Because the show’s host Jimmy Kimmel came up to Warren and said, “Warren, what did you do?”

MacLaine: Well, that’s Jimmy Kimmel and Warren’s problem. Don’t ask me that. I don’t want to talk about that. It was awful. But, I do think that aging people are underserved in this culture, big time. I want to stay healthy so I can serve that community and be a kind of voice. Yes, I want to be queen of AARP and I want to say what they feel. It’s awful that they seem to be made invisible. Maybe that’s one reason why I did this great movie. I didn’t want an older person to be invisible any longer. That’s what I want to do with it.

Q: What did you learn from working with your young co-star Ann’Jewel Lee?

MacLaine: I remember the scene in the restaurant where we were looking out the window at her dancing in the parking lot when she thought we weren’t looking at her. This kid is really, really talented on all levels, so let’s see what she does with that talent, and how dangerous real good talent can be. She can dance, she can sing, she can be completely open-hearted.

Q: You and Charlize Theron were presenters of the Best Foreign Language Oscar this year but the winner, Asghar Farhadi (for “The Salesman”) boycotted the ceremony because of President Trump’s immigration policy. What did you think about Mr. Farhadi’s statement that was delivered by his representatives at the show?

MacLaine: Well, he spoke for himself, so let that stand like it is. It was important and necessary. By the way, one of the people who accepted the award for him was the first Iranian woman in space, and the gentleman with her is also a part of the NASA space center.

Q: If you could write your own life story, what would you title it as?

MacLaine: I would write, “So Far, I Like This Lifetime the Best.”

Q: Your character, Harriet, talks her way into a job as a deejay at a radio station in this film. She plays some deep cuts from rock artists including The Kinks. Describe some of your musical influences. What’s on your playlist or what do you listen to when you want to escape?

MacLaine: Before this film, I hadn’t actually heard of The Kinks. I just want you to know. What really movies me, is Tchaikovsky’s “Nutcracker Suite.” I love classical music and I love the songs of Dean (Martin) and Frank (Sinatra), with the lyrics and wonderful rhythms, and how they blend the music into the heart. I’m old-fashioned.

Q: As Harriet, you have a showdown scene with your daughter, played by Anne Heche, where she is eager to label you and insists that you have a mental disorder. Do you think women of a certain age get labeled a certain way and why do you think that happens?