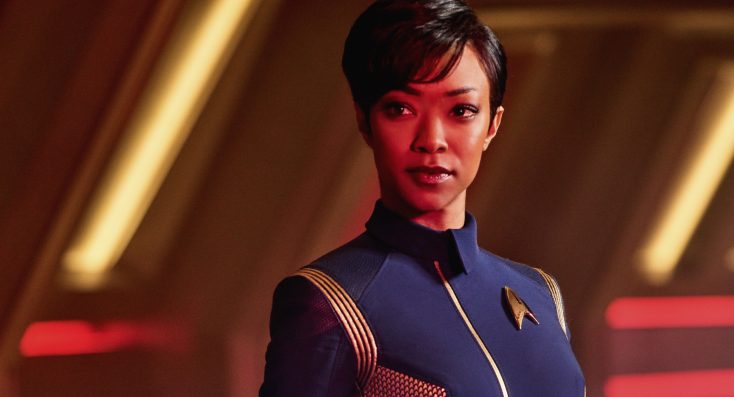 “Star Trek: Discovery” premieres on CBS Sunday Sept. 24, following “NFL Football” and “60 Minutes,” and then moves to CBS’ streaming service, CBS All Access. The second episode will be made available on CBS All Access immediately following the broadcast premiere.

Martin-Green came to CBS Studios to talk with the TV Critics about her new role and what it feels like to be a part of this legendary franchise.

Q: What was the timing between doing “The Walking Dead” and this?

Martin-Green: It was one door closing and another door opening, almost simultaneously. It was such a divine thing that happened, because I knew I was leaving “Walking Dead.” It was set in stone, and we were shooting my last few episodes. And then the opportunity for this came.

Q: At what point in “The Walking Dead” did you find out that your character was being written out?

Martin-Green: I got it a little bit ahead of time, so I did have a little time to prepare myself. People think that you find out from looking at the script. I don’t remember exactly when it was, because everybody finds out at a different time. But, for me, I was grateful for the time that I did have, because (producer/writer) Scott Gimple and I talked about it a lot, we really established an even deeper connection with each other over the end of Sasha’s story, I felt like it was sheer poetry the way it happened. I appreciated it because I got a chance to soak it all in before I left, and then here came “Star Trek.”

Q: Were you a “Star Trek” fan before getting this role?

Martin-Green: It was on the TV. I never sat down and deliberately watched it, but for some reason I still feel it was part of my upbringing and a part of me.

Q: When you found out about this role, was there a concept and a script to see?

Martin-Green: I sat down with (the series’ former showrunner) Bryan Fuller, first off. He was my first door into it, and I had a lovely conversation with him. I saw how much of a visionary he was. I was familiar with him before that, so just to be able to sit down with him and hear his vision for this iteration was astounding. There was a script at that time and I knew that a “Star Trek” was coming back to TV. And then I knew it was going to be on the digital streaming platform, which was a really big deal. I said, “Let me first read the script,” and the script was brilliant, and I said, “I need to do this.” So that’s how that came about. And then when it left and came back, which was around December, Bryan had made the transition out, but as they beautifully said, “Everybody felt like it was the best thing.” So, we hit the ground running.

Q: Why does your character have a male name?

Martin-Green: I appreciated the statement it makes all on its own to have this woman with this male name; the amelioration of how we see men and women in the future. But I also decided for my creation and for my background that I was named after my father. I think it’s a lovely symbol.

Q: Knowing the legacy of this franchise, did you feel any pressure starring in the series?

Martin-Green: Being the first black woman, yes. Captain Janeway (“Star Trek: Voyager’s” Kate Mulgrew) led the way, but I certainly had my freak out moment. I had to collect myself, sit down, focus and not be stagnated by the overwhelming feelings of it. I had to (say), “I’m here for a reason, God brought me here. God brought us all here, I believe, and it’s so important.”

Q: What was your first reaction when they called and told you that you had the role?

Martin-Green: I cried. My husband and I and my son were in Buenos Aires, and we got the call, “It’s yours.” It’s actually on camera. My husband recorded my reaction, so at some point I’ll have to (publicly) release that.