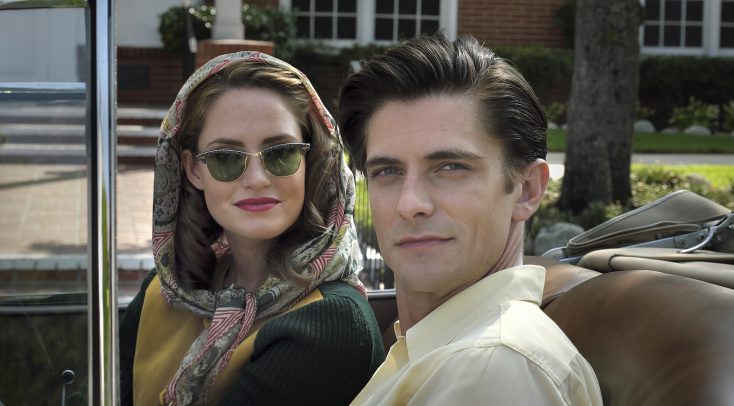 HOLLYWOOD—Louis Zamperini, the Olympic runner turned World War II hero who has been the subject of a bestselling book as well as feature film directed by Oscar winner Angelina Jolie, is getting yet another big screen treatment in “Unbroken: Path to Redemption,” opening in theaters Friday, Sept. 14.

The film picks up with Zamperini coming home from the war—unexpectedly as everyone thought he was killed in an air attack over the Pacific—and dealing with the challenges of returning to civilian life after being tortured in a Japanese prison camp. The Torrance Tornado (as Zamperini was known during his athletic heyday) meets and falls in love with a woman named Cynthia, who turns out to be not only his future wife and mother of his children but also the person who leads him to salvation by reintroducing him to his faith. A visit to a spiritual revival held by the Reverend Billy Graham (played in the film by his grandson Will Graham) becomes a turning point for the troubled combat vet who has been drowning his misery in alcohol and nearly ruining his marriage.

Zamperini is played by Samuel Hunt, who previously played a former Army Ranger on NBC’s “Chicago P.D.” and “Chicago Fire.” Cynthia is played by Merritt Patterson, best known as Ophelia Pryce in the first season of E!’s series “The Royals” and as Olivia Matheson on ABC Family’s “Ravenswood.” The film is directed by Harold Cronk (“God’s Not Dead,” “War Prayer”) from a screenplay by Richard Friedenberg (“A River Runs Through It”) and Ken Hixon (“Inventing the Abbotts”), adapted (like the 2014 “Unbroken” film) from Laura Hillenbrand’s “Unbroken: A World War II Story of Survival, Resilience, and Redemption.”

Hunt and Patterson, who coincidentally arrive color-coordinated in the same shade of blue for an interview, spoke about taking on the iconic roles of the Zamperinis, whose faith and commitment got them through one of the most difficult patches of their lives.

Q: How much did you know about Louis before you became involved with this production?

Hunt: Besides seeing “Unbroken,” I didn’t know much at all. I knew of Billy Graham and I’d heard of Louis Zamperini, but it was the movie that really introduced me to him.

Patterson: I read the book so I was familiar with his story through that. That was all the information I had on him was the book. It was fantastic. I read through it so fast. I remember trying to get my dad to read it. I was pitching the book because I thought it was such an incredible story. And then I saw the film when that came out as well.

Q: Merritt, you really captured the look and sound of a woman from that post-World War II era. Did you work with a voice coach?

Patterson: I didn’t but I did some research on the mid-Atlantic speech from that time period. Cynthia was from the south but she didn’t have a strong southern accent and so I didn’t want it to be too heavy but I did want there to be a subtlety to it.

Q: Sam, how else did you prepare for your role—the PTSD and alcoholism and the spiritual redemption?

Hunt: I knew that if I stepped back I could get overwhelmed by it all very easily because you look at these extreme circumstances and if you haven’t experienced them then how can you depict them? I wasn’t about to go to North Korea and tell them, “Hey, I need to be in a prison camp for a little while for some research. It’ll be cool.” Sorry, I don’t know if they have prison camps in North Korea. I don’t want to offend anyone. Northeastern Central Korea—how about that?

What I had to do was break it down into individual pieces and try and find how I could relate to the experience because I believe that emotion is universal. We understand pain. We understand hunger and sadness and all these things from the moment we come into the world. We all know what it feels like. It’s just contextualizing that and understanding the level that it’s on. So, there was a lot of that internal investigation when it came to the emotional stuff and then there was the physical stuff. There was a lot of preparation in terms of running. I love athletics but I hate running. (He laughs.) So, I definitely channeled some of that frustration into the film, which was a big part of what his journey was.

Q: Were the scenes where you two are arguing difficult to prepare for?

Patterson: It’s definitely hard to do emotional scenes. You have to understand the scene and the emotion. You have to be working with someone who is in it as much as you are and be able to bounce things off.

Hunt: Yeah, that’s when it gets really hard.

Patterson: It’s definitely a challenge but as long as you’re prepared and communicating with your scene partner and the director and just trying to stay in the moment, that’s the most helpful.

Hunt: Having a good partner is so essential. Some actors are comfortable taking to a dot (with special effects). Sometimes it’s necessary. I did TV for a while and that was a part of it. You run into scheduling issues. There are three cameras in front of you and there is literally room for an eye-line to the other actor so that’s never ideal. You’re putting yourself out there and committed to making it as good as possible. From Harold and Merritt, I knew they had my back. I could trust them. I could make a fool out of myself and she wasn’t going to judge me for it. It has to be that safe space so you can create good work.

I really genuinely care for Merritt as a person so there were scenes that were fairly difficult. I didn’t want to really yell at her or hurt her so I had to manage those emotions. You have a conflict which is very compelling. As a married couple, you don’t want to do those things you your partner, generally. It’s just that these other (factors) are driving you to them.

Q: How long did it take to film this movie?

Patterson: I was first. I shot a day three weeks before production with Vanessa Calloway (who plays a character called Lila). We shot two scenes completely out of context because production had a certain amount of days. The actual production didn’t start until a month later. We started in August and then began in mid-September.

Hunt: I got the booking two weeks before we started filming and I auditioned for it originally a week and a half before that. I sent in my first audition and then came in two times in person.

Q: Was the Zamperinis’ son Luke on set with you?

Patterson: Yeah, and their daughter Cynthia. Both were around quite a bit. They were so lovely and so supportive. That could put a lot of pressure on someone, portraying their parents. But they were wonderful. They shared a lot of stories with us. We got to see some family footage. Just hearing memories directly from the family, especially for me playing Cynthia. There’s not much information on her. I tried to do a lot of research beforehand but it’s really hard to find anything on her.

She’s mentioned slightly in the book. She didn’t appear at all in the first movie. So that was instrumental being able to talk with the family and see footage and get a sense of her essence.

Q: Was there anything specific that the Zamperini family showed you that helped you play your character?

Hunt: The honeymoon footage. I think it’s the only footage that exists of them together before the kids. Watching them interact and their playfulness and seeing Lou’s inner kid coming through in these videos, he’s like the performer almost. He’s like, “Hey, look at this, guys. Look at what I can do!” You can see this character that I can relate to being an actor. It was important to see that because it’s a very specific contrast to what you see in other parts of his life.

Patterson: They’re camping in a forest, by the way. You see how happy and carefree Cynthia is. You see that a little bit at the beginning of the film. She’s this young girl who’s so excited about life and then things get hard. For the majority of the movie, they’re struggling and trying to work through things and she’s forced to grow up. She’s this really strong woman.  To see that footage of her just being fun and the love between them really made a mark on me.

Q: Cynthia challenges Louis to a  foot race on the beach when he asks her to marry him. Did that really happen?

Hunt: A version of that happened and it was super-fun to shoot.