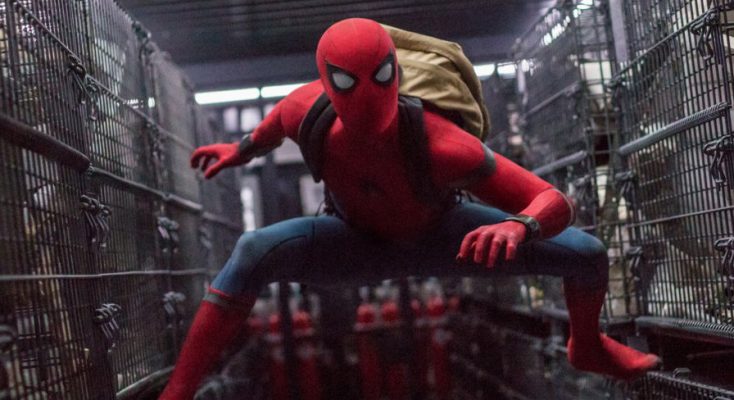 “It does, yeah. It really does,” the boyish-looking actor says during a press conference to promote “Spider-Man: Homecoming,” the latest reboot of the Marvel Avengers superhero franchise.

Want to feel old? Holland remembers as a child watching Tobey Maguire playing the crime-fighting webslinger in a series of “Spider-Man” films in the 2000s, and wanting to grow up to be just like him.

Holland was introduced as Spider-Man in last year’s “Captain America: Civil War,” in a small, but memorable performance.

So, who exactly is Tom Holland and why is he starring as an iconic comic book superhero in a big expensive studio movie this summer?

Born 21 years ago in London, Holland is the son of a photographer and a comedian/author. After attending parochial school, he entered the BRIT School for Performing Arts and Technology. He got his big break starring in the 2008 production of “Billy Elliot: The Musical” on London’s West End. He made his feature film debut playing Naomi Watts’ eldest son who survives a tsunami in 2012’s “The Impossible.”

In “Spider-Man: Homecoming,” he plays high school sophomore Peter Parker, a science geek, whose newfound superpower—being able to swing from a strong sticky web-substance that he shoots from mechanical devices on his wrists—sets him off on a whirlwind tour of saving the Earth from bad guys with fellow Marvel Avengers superhero Tony Stark/Iron Man (Robert Downey Jr., reprising that now iconic role). The key villain in this is Adrian Toomes (Michael Keaton), an embittered former salvage operator who begins stealing and selling ill-gotten alien technology on the black market. Chris Evans also makes a few cameos as fellow Avenger Captain America in this action-packed installment. Jon Watts (“Cop Car”) directs from a screenplay he wrote with five other writers.

At the press conference, Holland’s infectious enthusiasm and sense of humor are evident in his responses.

Q: What kind of responsibility did you feel playing a character that audiences love and that means so much to so many people?

Holland: The thing I had to remind myself most when I first took on this character was that Tobey Maguire’s Spider-Man had such a huge impact on me as a kid. He was my role model growing up. He was my favorite character, so I had to keep reminding myself that I’m going to have that same impact on kids of the younger generation. I really wanted to do them proud and to be a solid role model for them, and also just make a young, fresh version of the character we know and love so well.

Q: You must have had a lot of fun making it.

Q: The fun that you project on screen is infectious.

Holland: Thank you. Well, the question that Jon (Watts, the director) and I asked ourselves is, if you gave a 15-year-old superpowers, wouldn’t he have the time of his life? When I made this movie, I had the time of my life, so it really sort-of comes across on screen.

Q: You look like you had the time of your life sparring with Robert Downey Jr.

Holland: The man himself.

Q: This is obviously a life-changing role for you. Can you talk about your experience from “The Impossible,” where film audiences first discovered you, to this?

Every movie has been a very different experience to me, and I’ve been able to play different characters without having to go too far. Now that I’m sort of finding myself a little bit, I’m looking to go a little bit further. This job, since day one, has been a roller coaster. It’s the job that keeps on giving. It has never ceased to amaze me. The fact that I’m here with these guys promoting this movie is insane and it does not feel real in any way possible.

I read a comic yesterday, which is based off of my face. What the ****? So, nothing has sunk in. This really feels like I’m about to wake up and be very disappointed, but I’m very happy here and I can’t wait for you guys to see the movie.

Q: What challenges would you like to see Spider-Man overcome in next year’s “Avengers: Infinity War?”

Holland: I’m still getting over the first one. I haven’t thought about the second one yet.

Q: How would you say that Spider-Man’s relationship with Tony Stark has evolved since “Captain America: Civil War?”

Holland: The relationship between the two of us is more interesting from (Tony Stark/Iron Man’s) point of view because he suddenly has someone to think about other than Tony Stark. He really cares about Peter, and one of the reasons why he doesn’t really want Peter to become an Avenger is because he doesn’t want the responsibility of something happening to Peter on his conscience. So, it’s a nice sort of back and forth of me saying, “Look, I’m powerful enough to be an Avenger,” and him saying, “But you’re not ready to be an Avenger.” It’s a fun back and forth, just like a big brother/little brother, dad/son type situation.

Q: You and Jacob Batalon (who plays high schooler Ned) play best friends in the film. How well do you guys get along in real life?

Holland: The amazing thing about Jacob is he wrapped on the movie, he finished filming, he was done with his part in the film, and he just moved in with me. I was like, “Jacob, go home.” He lived with me and my best mate for like six weeks and came to work every day and just hung out. We were like, “You do know you can go home.”

Q: You have a dance and acrobatic background, so can you talk about those abilities and how that played into doing your stunts and how did you master hanging upside down?

Holland: You can’t really master hanging upside down. it’s not something I’ve been prepared for. But yeah, my dancing and gymnastics background was so helpful to this project because we were able to do things as Peter Parker that they probably hadn’t been able to do in the past. That said, sometimes they would overestimate my skill set. Jon (Watts) would be like, “Can you just back flip off that wall and land on that beam?” and I’m like, “No, Jon. I can’t do that. I’m not that good, dude.”  Like, “Just climb up that wall.” I’m like, “I can’t do that, Jon.”

Q: How did you make the leap from acrobatics to acting?

Holland: I sort of fell into it; it was never a decision. I was just lucky enough that I was given the opportunity.