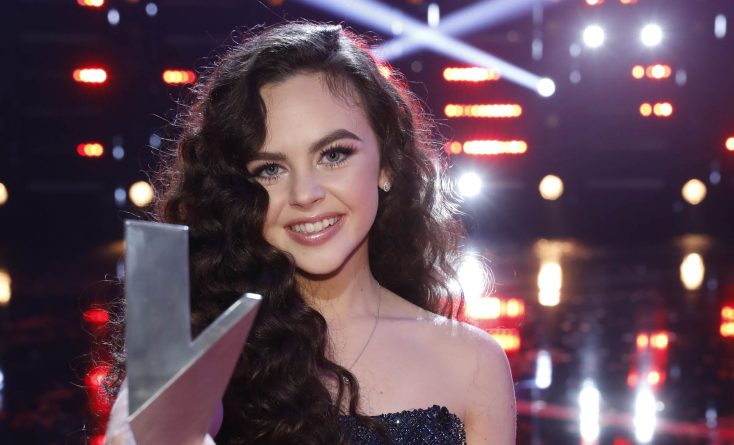 ALBUQUERQUE—From the small town of Farmington, N.M., 2018’s winner of NBC’s “The Voice” is Chevel Shepherd. (She pronounces her first name “Chevelle”)

The 16-year-old credits the popular TV talent show with helping her grow as a confident performer comfortable on stage. As her dad told the press, “She left here as a young girl and is coming back a young woman.” Chevel says that any guy who might want to ask her out will have to “go through my dad.”

On the live finale show that aired on the Peacock network Wednesday night, the delicate, 4’10” country songbird who has been singing since age two, stood with shaky knees along with the rest of the final four contestants: Kirk Jay, 14-year-old Kennedy Holmes and Chris Kroeze. Soon it was down to Shepherd and Kroeze. When Kroeze’s name was called as first runner up, it dawned on the teenager that she’d won.

Still a student at Farmington High School, Shepherd credits her close family, friends and many supporters with keeping her grounded now that she’s hit the big time. Her coach on the show, superstar singer Kelly Clarkson, is also a major reason that she’s come so far after winning a four-chair turn in this season’s blind auditions. Shepherd went on to perform on the show “Blue,” “A Little Too Late” and “Speechless” along with “Broken Hearts” a tune gifted to her by Clarkson who had once intended to record it herself.

Since her sudden rise to fame, Shepherd has been given a crash course on talking to reporters. After the hype dies down, she plans to return to Farmington to thank in person all those who supported her. Then she’ll start work on a country album with mentor Kelly Clarkson. I spoke with the newly crowned star by phone from Los Angeles.

Q: I’m originally from Carlsbad, N.M., and you are from Farmington so I know firsthand that the whole state was rooting for you.

Shepherd: Thank you so much.

Q: Are you okay with everyone calling you the nickname “Country Tinkerbell?”

Q: What was the most important thing you learned from Kelly Clarkson?

Shepherd: To stay true to myself and just to have fun and not worry about winning or losing because, no matter what, you’re giving it your best and having lots of fun and loving what you’re doing.

Q: Good advice. What do you plan to do to stay grounded when you are so suddenly a star?

Shepherd: I always have to remember where I came from and all the people that supported me to get me here. I’ll just remember my hometown and everybody who showed me love.

Q: You auditioned for season 13 and they said the teams were already full but they called you to come in for blind auditions this season. Was that an upsetting roller coaster ride for you?

Shepherd: I went to open calls in Vegas and I didn’t make it but I wasn’t super sad after season 13. I was going to do my own thing at home and just have fun singing my music then they (the producers) called me and, well, here I am.

Q: So, you must have made a big impression. Who were or are your music artist idols other than Kelly Clarkson?

Shepherd: I really love Loretta Lynn, Carrie Underwood and Miranda Lambert. I have a lot that I love.

Q: When you aren’t performing, what is an average Saturday at home like for you?

Shepherd: I help my mom and dad around the house. I hang out with friends. Normal teenage stuff. I work on cars with my dad.

Q: Wow, you can tune up a car? Great. Do you have advice for kids or teens who have a dream that maybe everybody in their lives doesn’t support?

Shepherd: I would have to say follow your dreams and don’t let anything get in the way because if your heart desires it, you should go for it.

Q: Will you ever cut your long hair?

Q: Of all the gorgeous dresses you wore on the show, which is your favorite? Did you get to keep any of them?

Shepherd: That is a hard question because I loved all of them. I really liked the dress that I wore when I sang “Grandpa” my original dress. I like a whole bunch of them but I got to keep all of my clothes that I wore on the show.

Q: What must a guy do if he wants to date you? Something that has to happen; he can’t get around it.

Shepherd: Well, first he has to go through my dad. He’d have to meet my dad first. Don’t know what else I’d require. I mean he’d have to be nice. Some guys are scared to meet dad. I don’t know why.

Q: He’s pretty formidable. What is your pet peeve? What do you just hate people to do, like when they meet you?

Shepherd: People who chew really loud or they are sitting next to you and they start breathing super, super heavy or when someone comes up to me and they touch me all the time, like poke me on my back or something. Sometimes that gets annoying.

Q: For sure. You think of singing as a career but what is your hobby?

Shepherd: Working on cars with my dad or I like to read and write stories.

Q: What is your ultimate goal? Do you want to write songs, make albums, tour, be in a musical?

Shepherd: I want to put out Country albums and write my own music and tour the world and go to the Grand Ole Opry and the CMAs. I have a bunch of goals.

Q: Your dad said, “She left as a young girl and came back a young woman.” How do you feel about that?

Shepherd: I’d have to say that I agree with that. Yeah (she laughs). It’s true.

Q: How did the show change you?

Shepherd: I feel like it made me a better performer than I was. I can move around the stage and connect with people more easily than I could before. I feel a lot more comfortable on stage now.

Q: Who would you like to sing a duet with?

Q: Would you want to tour with Kelly Clarkson?

Shepherd: Yeah. We’ve talked about doing some shows together.

Q: If you weren’t going to be a professional singer, what kind of work would you want to be doing when you grow up?

Shepherd: I would want to be a forensic profiler like on “Criminal Minds,” putting the puzzle together on why they did (the crime). Also, I love animals so I’d like to be a veterinarian as well.

Q: Do you plan to return to Farmington High when you are home or are you home-schooled now?

Q: Do you have a final word for young people about following their dreams?

Shepherd: Just to always do it. Don’t let anyone stop you. Have lots of fun in life and take as many chances as you can get.