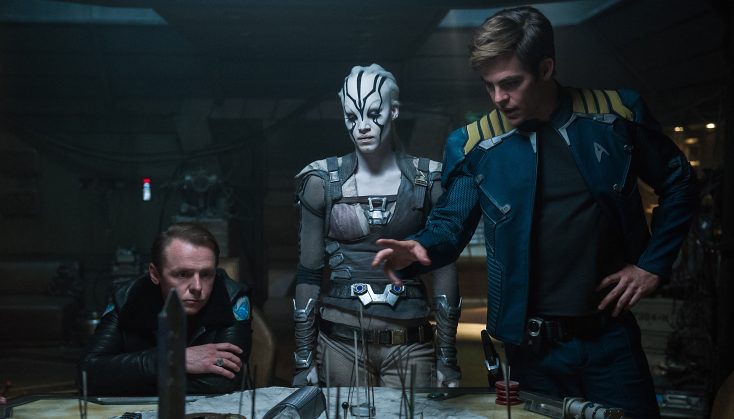 HOLLYWOOD—Long before he was a major Hollywood star, Simon Pegg was a comedic actor on a TV sitcom in Britain called “Spaced.” He and Jessica Stevenson co-wrote and co-starred in the late-‘90s comedy as young London slackers who pretend to be married in order to rent a flat from an uptight landlord. As Tim Bisley, Pegg was a sci-fi geek with an almost encyclopedic knowledge of “Star Trek,” “Star Wars” and other pop culture fun facts.

Pegg, who co-wrote the screenplay with Doug Jung, spoke at a recent press conference about tackling the screenplay of the newest “Star Trek” voyage, always keeping in mind what Tim Bisley (and “Star Trek” fans like him) would want to see with the outer space adventurers.

Q: What would Tim from “Spaced” like and dislike about “Star Trek Beyond?”

Pegg: For those who don’t know, I started out on a sitcom in the U.K. called “Spaced.” It was about a nerdy guy. I don’t know what I was talking about—it wasn’t me at all. There’s a line in “Spaced,” where Tim says, “As sure as eggs is eggs, as sure as day follows night, as sure as every odd-numbered “Star Trek” movie is ****.” I wrote that in 1998, and here we are in 2016, and I’ve written an odd-numbered “Star Trek” movie, and I’m happy to say that Tim is wrong.

It’s an incredible thing to look back on the circularity of that, having grown up a fan of “Star Trek,” and science fiction, and now to be participating in it in such an active way. I tried to just make the kind of “Star Trek” movie that Tim Bisley would like. That’s what Doug (Jung, the co-writer) and I did. And when I say Tim Bisley, I’m talking about the people that have been with “Star Trek” for a long time.

“Star Trek” must have been doing something right because it’s been around 50 years, and if it ain’t broke, don’t fix it. So we wanted to embody the original show, and instill it with what made the original show great but also frame it in a big movie way, which was a luxury they never had back in the day. That’s why this series has turned into such a great thing. Necessity was the mother of invention with that show. They had to make these wonderful teleplays. They couldn’t rely on special effects. Now, we can do both. I was always thinking (as I wrote it), “What would Tim Bisley think?”

Q: What was the challenge of making a movie that honors the 50th anniversary of “Star Trek and be the next level in this trilogy of films? And make it a great action movie for people for non-fans or newcomers to the franchise?

Pegg: That was very important to us—Doug Jung and I and (director Justin Lin)— going in. We wanted to sort of try and create a hybrid of an episode of the original series with a spectacular cinematic event. The “Star Trek” movies have always been “event” films. With the TV series you get time to spend with the series, you have time to spend with the characters. It’s a longer game. With a film, you have to try and hit it. It has to be self-contained. It has to memorable. That was the thing to make sure that everybody’s that’s been here for 50 years gets what they deserve, in terms of a good “Star Trek” film, and for the people who’ve never seen it before, who perhaps aren’t as familiar with “Star Trek,” they don’t know about Kirk fighting (villains), they’re welcome too. This is an inclusive universe in every way, not just fictionally but factually, too.

Q: Justin Lin said the main reason why he wanted to tackle this project was because his childhood dream was to (SPOILER ALERT) blow up the Enterprise and then bring it back together. So was that a collaborative effort, or was that all his idea that he presented to you and then you developed it in the script?

Pegg: I hated the idea at first. I swear, we had like, rows about it. I was shouting down the phone, going, “You can’t do that! You can’t destroy the Enterprise!” My problem was that, if you think it’s something new, and then we’ve seen it before. It happened in “Search for Spock,” it happened in “Generations.” But Justin was very very determined, and as we spoke about it, I realized what he was doing brilliantly was not only sort of taking out a main character, but he was removing the physical connective tissue between the crew. To see what happens when you take away the thing that physically bonds them together. If you take away that thing that necessitates their being a unit, do they dissipate or do they come back together? And that was the genius of that. You take it away very very violently and dramatically, and then you wait and see if they all come back together to be this family, which is essentially what they are. And, of course, they do. So I backed down immediately and said, “Yeah, you’re right,” which I do occasionally, not always. But in this instance, I realized it was a brilliant idea. But yeah, initially I was opposed to it.

Q: There are various subplots involving the cast in which they are paired together?

Pegg: Doug and I realized that Chekov hadn’t ever spoken to Sulu at any point in the other two movies (“Star Trek” and “Star Trek Into Darkness”). We realized that a couple of the characters had never interacted at all.

Q: You’re living the dream. As the writer, you get to tell your co-stars what to do after all these years.

Pegg: I ask them nicely.

Q: Is there anything in “Star Trek Beyond” that you always wanted to see in a “Star Trek” movie that ever since you were young you finally got to do and you felt was important to add in this movie?

Pegg: The business of writing a good story and making sure the plot works—all that kind of stuff—superceded any kind of wish fulfillment. We had to start with that, really. The whole splitting up the crew into little interactive groups was nice. I loved the relationships in “Star Trek” and it was nice to pursue those a little bit more, particularly with Bones and Spock, and the scene with Kirk and Bones at the beginning. It’s kind of a vague parallel to the scene in (1982’s “Star Trek”) “Wrath of Khan” when on Kirk’s birthday Kirk and Bones have that moment together. Getting the keys to that kingdom was a real joy and it was sort of nice to be able to write our signature underneath the hundreds and hundreds of signatures that have gone into writing the “Star Trek” universe over the years. It was nice to put our little stamp on that and fill it with little Easter eggs that only we know about.

Q: How far do you see the franchise going with these characters and are there any thoughts of a spinoff with “The Next Generation?” What was the greatest takeaway for you from this film?

Pegg: I hope it goes on for another 50 years. We’ll keep going on as long as we can until we’re old and inappropriate. Some of us already are, I say. Me. The thing about the new timeline is that Picard (“Star Trek: TNG”) and Janeway (“Star Trek: Voyager”), all those guys, they don’t exist. I’m kidding! Man, would I be in trouble. I hope it goes on. There’s new CBS series starting. The galaxy, let alone the universe, is a boundless place. There are so many adventures to be had. As long as we have this idea that if we don’t all kill ourselves and die in a big fire, we might actually become slightly more enlightened, slightly more tolerant beings, and go off (to explore) space. That is a lovely idea that, secretly, the vast majority of us want to achieve, and “Star Trek” can live forever.

Q: The original series often delved into themes with allegories of what was happening socially and politically at the time. Did you try and do that with this film?

Pegg: Even since we shot it, the message of this film, the social commentary in this iteration of “Star Trek” is that we’re better (off) together. That’s what it’s about, collectivism. In this era of Brexit (the U.K.’s recent vote to leave the European Union) and talking about building walls in certain places, now more than ever we should be thinking about the value of collectivism and about cooperation and unity. That can be and is our strength: the more fractured we become, the less secure we all feel. The villain in “Star Trek” we could have called him Brexit. It’s like a science-fiction name, isn’t it?

Q: What did you think of Sofia Boutella who plays a new alien character named Jaylah?

Pegg: Sofia’s incredible. She’s a dancer so, physically, she’s so adept. She was very up for the physicality of it. When Doug, Justin and I were in the writing room, we wanted to create this very independent female, a very resourceful character on the Altamid surface. We didn’t have a name for her. So we used to call her Jennifer Lawrence in “Winter’s Bone.” That was her long name. It started to get tiring because it’s a long name. So then it became J-Law, and then she became Jaylah. So Jaylah is basically named after Jennifer Lawrence in “Winter’s Bone.”

There aren’t enough girls in “Star Trek.” Zoe (Saldana) has a lot on her shoulders, as you know, so we wanted to increase (the number of women in the film.) Also, with Commodore Paris is a figure of extreme authority. We all loved Sofia. She’s a nutcase and a golden addition to this group. She’s awesome.

Q: There’s been a kerfuffle about the character of Sulu (played by John Cho in the rebooted film series) being gay. George Takei (who originated Sulu on the TV series and earlier films) has expressed his dismay publicly over that change in this film.

Pegg: The point is (Sulu) had somebody in Yorktown. What we (the writers) wanted to do was put somebody that (the crew) cares about in Yorktown so when it’s under threat, it made the threat tangible. We (the audience) know Sulu’s family is there so it’s not a bunch of faceless Federation people. We care about who’s there because we care about Sulu. That was the important thing. The nature of that relationship wasn’t an issue. By the way, the whole thing with George (Takei), people like to make things into a spat. George and I email all the time. We had big, long lovely discussions about it. We’re on great terms. We never shouted at each other. It was a great discussion to have. I’m really happy with the way it’s been talked about and responded to, and I’m still a huge fan of G.T.