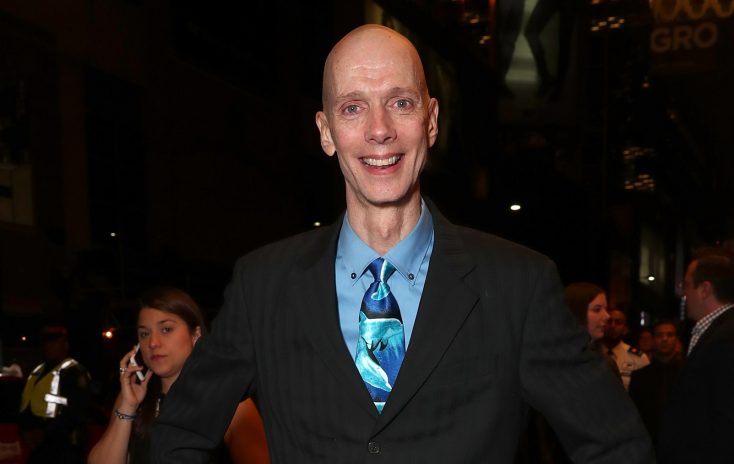 Sally Hawkins and Doug Jones on the set of THE SHAPE OF WATER. ©20th Century Fox. CR: Kerry Hayes.

HOLLYWOOD—Chances are you may not recognize Doug Jones on sight but more than likely you’ve seen him in some of your favorite sci-fi and horror movies and TV shows. With his tall, slim frame and almost animal-like gracefulness, Jones frequently plays monsters and otherworldly creatures hidden under layers of makeup and incredible costumes. He also consistently pops up in Guillermo del Toro films including the critically acclaimed “Pan’s Labyrinth,” the “Hellboy” movies as well as the multi Oscar-nominated “The Shape of Water.”

The Indiana native plays a starring role as Saru, an alien commander aboard “Star Trek: Discovery” and played the title character in last year’s horror movie “The Bye Bye Man.”

Aside from sci-fi fan conventions and red carpet premieres, Jones enjoys a great enviable degree of anonymity and privacy for a popular actor because he is so often unrecognizable in his roles. His laid-back disposition makes it possible for him to sit through tedious hours of makeup application, often arriving on set before his co-stars and leaving long after they’ve gone home.

In “The Shape of Water,” he plays a gilled, god-like creature captured from a South American river that is being held in a top secret U.S. government installation outside of Washington, D.C. during the Cold War. Tortured by a sadistic colonel (Michael Shannon), Amphibian Man finds a friend in a mute cleaning woman named Elisa (Oscar-nominated Sally Hawkins). Their cross-species friendship blossoms into a full-blown romance and Elisa soon realizes she must help the creature escape before he is killed in captivity. She enlists her friends (played by Octavia Spencer and Richard Jenkins, both nominated for Oscars in their supporting roles) to carry out the daring mission.

Jones, a youthful-looking and fit 57, spoke about playing the romantic lead for the first time in his 30-year career, collaborating for a seventh time with del Toro and coping with the long hours of getting into makeup.

Q: Knowing you’re going to have to go through hours of makeup, do you go into these projects with trepidation or excitement?

Jones: I always look forward to the end result because it’s always something so beautiful. But, the process itself? Don’t love it. When you’re spending hours smelling glue and chemicals, and getting up before everyone else does, and then going home after everyone else does, it’s wearing on a soul, a person, a body. Any sacrifices I make are so worth it when I get to sit in a theater and watch the movie and say, “That’s why I did that.”

Q: How many times have you worked with Guillermo del Toro and what makes you want to work with him again and again?

Jones: This is my sixth movie and I was a recurring character on his TV show, “The Strain.” I’ve been acting for 30 years, most of it under rubber bits. Between the seven projects I’ve done for him now, I’ve done 12 characters for him. Finding how the (next) one is going to be different —that’s the challenge.

On this one, he drew from a character I’d played before. He said, “Dougie, I want you to give me a little Silver Surfer,” a character that was a god-like angelic being that had inner strength and a quiet heroism about him. He also said, “I want you to sprinkle in a little bit of a matador.” As athletes go, they’re graceful and very beautifully choreographed and sexy. They lead with the pelvis. That helped me determine this. It’s hinted in this film that where I come from, the Amazon, the local people that saw me worshipped me as a god so I had to have some regal presence about me that would warrant that.

Q: Did he give you more on Amphibian Man’s backstory?

Jones: No, that’s all I know. So, there’s some mystery to him, even to me.

Q: What is special about your relationship with Guillermo?

Jones: He’s my favorite director I’ve worked with in my life and will remain that way until the day I die. He has a brilliant mind full of creepy crawly monsters, and I’ve had the privilege of playing most of them. I get to sleep at the foot of his bad; that’s how I feel. I’m the house pet that gets that privilege.

When we were doing “Crimson Peak,” for instance, I’d played a couple of ghost characters and was on the production off and on for about three weeks. But when I arrived on set and did my first costume fitting and on-camera test, one of his producers said, “Doug Jones is here. We can finally do a real Guillermo del Toro movie.” That seems to be a consensus among people around him and so I can’t be more honored or grateful for that privilege to be associated with him in that way.

Q: What do you know about him that everyone else doesn’t?

Jones: He lays his heart out on the table when he talks to you so you do know most of the things about him. The thing that strikes me the most is that underneath it all, he’s an eight-year-old fanboy. The little boy inside of him that gets excited about creepy crawly monsters has never faded or gone away. He’s never grown out of that, thank heaven. That’s why he makes the movies he makes, and makes us all have geek-gasms every time we watch something that he makes. He’s a devoted family man. His kids come first. He just adores family but he also doesn’t sleep. He sleeps less than anyone else I know and he has more energy than anyone I know. So, he has a different chemical makeup. He’s something otherworldly which is why he can channel into monsters so easily. It’s because he’s not quite human himself.

Q: How did you approach the love scenes with Sally Hawkins? Did you talk about it a lot?

Jones: Oh yeah, we talked about it a lot. Both Sally and I are very modest people when it comes to that kind of thing in film. So, the love scenes were very special. I’d never played a romantic leading male in my life—as a person or a creature. This was new for me. Guillermo kept reminding me, “You’re the romantic leading male in this movie.” But he also reminded me that he was shooting it so I knew it was going to be tasteful and with innocence. For the creature, it was probably his first encounter so I kind of went to that “Meet Joe Black” place where Brad Pitt has been taken over by death and has an experience with Claire Forlani for the first time. It was just the innocence and beauty of it all. What led up to the sex in the movie was the connection and trust with each other. We communicated non-verbally with each other. There was no verbal dialogue; we’re both mute characters, so we explored the kind of communication that comes in other forms. There’s a nod of the head. There’s the sharing of boiled eggs. There’s music. There’s dance. There’s purity that’s not muddled up by words. When there’s touch involved, you can’t lie. Touch doesn’t lie. Words can be polluted but you can always understand when somebody’s touch is genuine or not, and the touch between our two characters was very genuine.

Q: You have the advantage of being part of the Hollywood industry without having to give up your anonymity. How do you like that?

Jones: I like it. The more press I do now that I’m at this place in my career, the more I get recognized in public from time to time, but I know it’s someone who’s dug out to find me. They’ve watched the interviews and watched the bonus features on DVDs. But being able to go to McDonald’s and get my Big Mac and not cause a mob scene is great. When I go to Comic-Con in San Diego and I’m surrounded by my peeps, that’s great too. I get the best of both worlds.

Q: Do you think your performances will ever be recognized within the industry?

Jones: I don’t know if the guy in a fish suit has ever gotten a nomination before. But this movie, in particular, I’ve put a lot of myself into it. I literally worked my *** off so if some recognition comes my way for this particular film, I wouldn’t argue it but I’m certainly not expecting it either.

Q: What’s the most elaborate costume you’ve had to wear?

Jones: The faun from “Pan’s Labyrinth” was probably the most elaborate thing I’ve ever worn for (Guillermo del Toro). It was a five-hour makeup and suit application. I had to clomp around on stilts. I was seven-feet tall with ram-horns on my head and mechanics built onto the face that were loud when they turned them on to make the ears flap and the eyes open and shut. That, and rattling off paragraphs of dialogue in Spanish—a language I don’t speak. That was the most mind- and body-consuming role I’ve ever done.