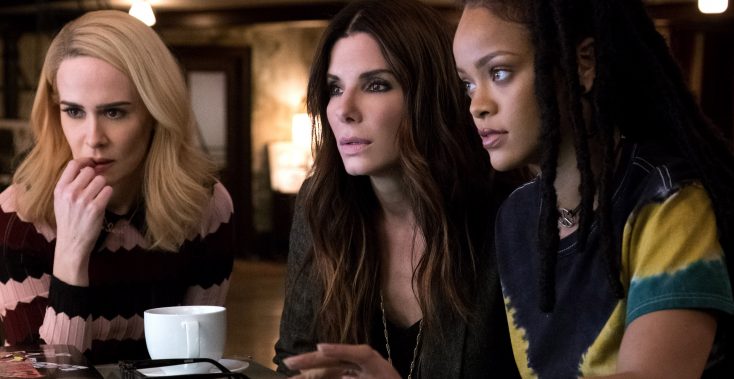 Oscar winners Sandra Bullock, Cate Blanchett and Anne Hathaway headline the female-driven action-comedy. Bullock plays Debbie Ocean, the estranged sister of Danny Ocean (Clooney’s character), who cobbles together a crew of like-minded criminals to pull off a brazen heist. Instead of hitting casinos, as the boys did, the sticky-fingered gals target priceless jewels and designer gowns at the annual star-studded Met Gala in New York. Mindy Kaling, Sarah Paulson, R&B vocalist Rihanna, Helena Bonham Carter and rapper-comedian Awkwafina round out the girl-powered cast.

Best known for her breakthrough role in “Speed” and her Oscar-winning turn in “The Blind Side,” Bullock has been one of the most vocal supporters of the #MeToo movement. She spoke at a New York press conference promoting her new film about how she was onboard with the girl-powered project from the get-go, speaking at length with Jerry Weintraub, who had produced the previous films, including the 1960 original.  (Weintraub died before filming commenced on “Ocean’s 8.”) Steven Soderbergh, who directed the Clooney & Co. trilogy produces the latest installment alongside Susan Ekins. The heist-comedy is directed by Gary Ross (“The Hunger Games,” “Seabiscuit”) from a screenplay he wrote with Olivia Milch.

Q: Do you recall first hearing about this idea of a female version of “Ocean’s …” and what did you initially think of it?

Bullock: Yes, I remember (producer) Jerry Weintraub, whom I’d known for years—I don’t know if you guys have ever had the pleasure of meeting Jerry; he’s no longer with us—but he called and said, “I got this idea I’ve got to present to you.” I was like, “OK.” Then, as it would be that Gary (Ross, the director) and Steven (Soderbergh, producer) and Jerry were in the room. I honestly didn’t think it would work or get made. I thought it was a fun idea. I said, “But if you do it, let’s just get the young character back.” But I didn’t think at that time that it would get made. It was like a year and a half-ish later that the script appeared.

Q: How many hours of phone conversations did you insist on having with George Clooney to really delve into the brother/sister relationship between Danny and Debbie to get the backstory just right?

Bullock: Many, many, many. We grew up together. Yes, yes. (Debbie) was there.

Q: One of the thrills of the Sinatra “Ocean’s 11” original and the Clooney remake, hanging out with his friends, is that you got the impression that it was pretty much like watching those guys hanging out with their actual friends, and that created a chemistry that we see. I’m not sure how close you guys are as friends personally, but I wondered if there was bonding or any exercises that you guys did to foster that chemistry.

Bullock: (quips) Kegels. We were able to bond and connect in the way that we could, in that we were working crazy, long days, we were draped all over each other on a couch at midnight, and once we let our guard down and we realized we’re in the company of safe people, we all began the vomitfest of just …. well I did. I threw up first. I did. I went in hoping—and you don’t always get what you hope for—and, by the end, I think now continuously and I think long past this film is out, we managed to connect on a level that we never, ever would have been given a chance because we don’t get to work with other women. There are five roles (in Hollywood for women) and we’re all just sort of looking for them and they’re all lone, little islands. And yet here we were, Hawaii, and all the other islands. Sorry, I’m just trying to … No, I feel really lucky. I feel really lucky because there’s no more stones I need to turn over on this one. I really feel that I came out with so much more than I ever imagined. They might not feel the same, but I don’t care. I feel very lucky.

Bullock: (This film is about) women taking care of each other, women being good to each other, women stepping back and letting the more gifted step forward in the heist—recognizing talent and saying, “Go out and shine. I’ve got your back.” It’s not about fighting over… Sure, we can fight—but we’re fighting for the greater good, which is a whole lot of money. To me, the most important thing was, I didn’t care about the heist as much as I cared about how they treated each other and how they lifted each other up. To me, that’s the world. It’s not the world that’s represented in media a lot, but really what’s happening is that there’s just so much love and support. We now need to show it. I think that will help equalize a lot of things.

Q: Was that a script reading?

Bullock: (quips) No. We didn’t have a script. We were that good.

Q: The #MeToo movement have inspired women all over the world. In fact, in Chile, several actresses have spoken about the abuses they have suffered inside the industry, and last week thousands of young Chilean women protested on the streets against sexual abuse, so what do you think about this and what do you say to these young, Chilean women?

Bullock: Good for you. And, hopefully, that they see the support from the Chilean men. We are a bunch of women up here saying we love being together, but none of us are saying we want to be up here without the men. We all want a spot at the table. I hope the men of Chile are there supporting (Chilean women).

Q: Who in this cast do you think would be more likely to actually ruin a heist and why?

Q: Could you talk about working with costume designer Sarah Edwards on the style, the glamour, the luxury and the image of these fabulous eight leads?

Bullock: We worked very closely with the designers as well, and the designers were really, for the most part, generous with Sarah. I know it’s shocking to believe that all eight of us might have very strong opinions about what’s going on our body. We did. The designers were incredibly collaborative. My dress was Alberto Ferretti, which is Italian, but I literally had thoughts. I wanted a sleeve a certain length because I was going to palm a jewel, but I wanted it to be black because my character needs to disappear. Once I got the dress and I saw the ornamentation on the bottom, they had just, I went, “Oh.” It was a nautical theme. There were sand dollars and starfish and waves and I went, “Oh, Debbie Ocean. I get it.” I didn’t ask for that. But the handiwork and the craftsmanship that went into these outfits harken back to a time that I don’t think we’ve been around in a long time, where we value and we revel in the character of the costume. That’s what was so much fun about this film. The nights when we shot the Met Ball, to see everyone who attended, all the people that volunteered their time. No one was getting paid. It was stunning and you don’t get to see that anymore. You see it at the Oscars maybe, but not on the level that we saw it that night, because people just went all out. It was stunning.

Q: If you didn’t have your own part, who’s part would you have wanted to play? Would you want to be Yen, the Chinese acrobat?

Bullock: You know what? You’re absolutely right. Yeah, we all sort of had a mad little love affair with that person.