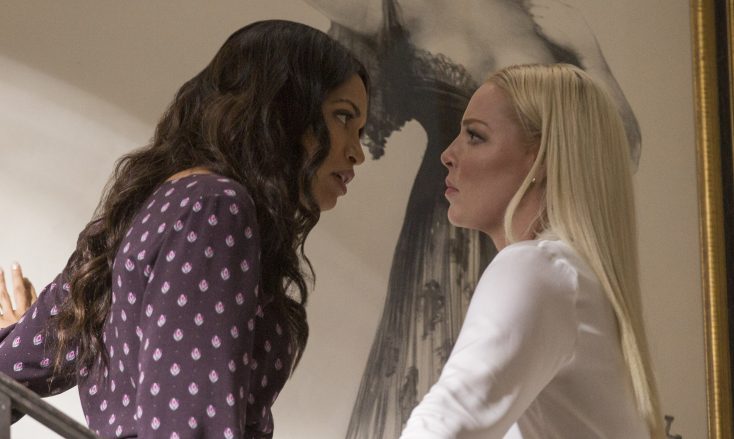 HOLLYWOOD— Rosario Dawson has played her share of memorable characters on the big and small screen in her two-decade career, but none has become more beloved than her depiction of Claire Temple, the steadfast and caring nurse who frequently places her own life in jeopardy to aid injured superheroes in the Marvel Cinematic Universe (MCU). Introduced in 2015 on Netflix’s “Daredevil” TV series, Claire has resurfaced in “Jessica Jones,” “Luke Cage” and “Iron Fist” and will be seen in the upcoming “The Defenders.” All of those action dramas air or will air on Netflix.

Having made her feature film debut in Larry Clark’s acclaimed 1995 drama “Kids,” Dawson has appeared in a few dozen dramas and a smattering of comedies. Her credits include “Sin City” and its sequel “Sin City: A Dame to Kill For,” “Rent” and the Will Smith starrer “Seven Pounds.” The brunette beauty returns to the big screen in the female-driven revenge thriller “Unforgettable.” She plays a woman who has suffered domestic abuse in the past and is trying to rebuild her life with a new man. Her guy, David (Geoff Stults, “Grace and Frankie”), is divorced and shares custody of his young daughter with an ex-wife who, on the surface appears, to be simply icy but beneath that surface is an extremely troubled woman who still holds a torch for her ex. When Julia (Dawson) and David (Stults) become engaged, Tessa (Katherine Heigl, at her blondest), loses it, and hatches a devious “Catfish”-style plan to put Julia’s ex-con former abuser (Simon Kassianides) on her trail.

Dressed in an eye-popping designer gold print dress, the effervescent Dawson spoke about the challenges of making “Unforgettable,” facing off against Heigl, internet privacy and more.

Q: What attracted you to this role? How was it facing off against your adversary played by Katherine Heigl?

Dawson: What I loved about this was the opportunity to just work with a bunch of remarkable women and tell a very multi-faceted story about women that didn’t have to have them be perfect. What was interesting was watching these different women struggle with the idea of perfection and how each of them, in that struggle, gets lost on the way— the miscommunication and just the opportunities and possibilities, because you’re just so caught up with the knee-jerk reactions or the heat of the moment and the distraction of anger. I like that I felt like a part of every single one of those women. There wasn’t like, “Oh, she’s bad and this is the good person.” It was like, “No, I’ve definitely not handled upset well and I’ve gone a little crazy.” This is an interesting thing to explore, actually, to see these different women just uphold the full spectrum of what it is to be passionate.

Aja Frary has been my stunt double for years. She’s been on all the Marvel Netflix shows with me. It was like, I’d fight with Katie. Then Aja would fight with her, and then I’d fight with Dailyn (Matthews, Heigl’s stunt double), and then Dailyn would fight Aja. We’d always take turns tussling with each other. It was a lot of fun and it was interesting to see how it brought out such a different range in us. I just thought that was really beautiful, to see such a full range.

Dawson: First of all, I want to say that’s not just a woman thing. I’ve read that (actor/director) Andy Garcia is very particular about what he wears. He cannot play a character until he’s figured out his shoes. I’ve read about it very extensively. He has to find his shoes and he has to break them in, and there has to be a whole thing. This is across the spectrum. This is an actor thing, period.

Q: Katherine’s perfectly coiffed hair is almost a character in itself, wasn’t it?

Dawson: Yeah. It was very funny as we talked about it. When she’d be on set and we’d be doing this really strong scene and then all of a sudden one of Katie’s hair would stand up because that straight, bleached hair was really hard to maintain. We’d be really intensely looking at each other, and then a hand would come in and brush it back. I’d keep eye contact with Katie, like “We’re not going to lose the moment.” Then it was smooth again and we could continue.

My character is really trying to hide her (physical) scars. We don’t look at our weak moments as anything other than weakness, and we don’t want to share that with each other, even with the people that we care about who say that they’ll be there for us forever, because we see how parents abandon their children. We see the relationships that are never supposed to break, break. We are very careful with that and sometimes overly so, and we make choices that, in hindsight, we would do differently, but you understand them in the moment. That passion was something really brilliant, I thought, for all of us to get a chance to explore.

Dawson: There was a moment we were all on set and we didn’t have a lot where we were all together. There was a moment where it was like, “Charlie’s Angel shot” and we all three took the (“Charlie’s Angels” iconic pose) together. We ended up doing it and then we walked away and I remember Katie being like, “I wanted to do that but I didn’t want to ask.” I felt like I had an in.

Q: You play a stepmom to Lily, played by 9-year-old Isabella Kai Rice. What was that like?

Dawson: She’s just remarkable, and she and Geoff (Stults) became best friends, literally. They just had breakfast yesterday. They hang out all the time. That was a really key part of it as well, that relationship with the daughter. It could not have worked without her, and especially the relationship between the two of them (Stults and Rice) was so beautiful to watch that you could see why everything else built on top of it.

Q: Did you do any research on domestic violence victims?

Dawson: Yes, over the years I have. I’ve been a spokesperson for different campaigns, including the Respect! campaign. I’m also on the board of V-Day, which is the campaign of Eve Ensler, who wrote “The Vagina Monologues,” to end violence against women. I’m on the board of the Riverside Girls Club. When I was younger, I went to work with my mother at Women’s Inc. in San Francisco, which was my first real experience of just the remarkable infrastructure that some people choose to create for people like my character who ends up really alone.

My character in this doesn’t have family, she doesn’t have a lot of friends, and oftentimes when you get into an abusive relationship, (the abuser) silos you off and kind of cuts you off from the hurt. You end up being more and more desperately needing that abuser.

Q: There are some super sexy scenes in this film. Was it easier having a woman directing you during the love scenes?

Dawson: It was fun. I’d say what was great about having Denise (Di Novi) and Alison Greenspan producing was that there was such an open discussion about the film, all the time, which a lot of directors get super precious about and can’t really do, or sometimes they’re not really big picture.

There was this discussion like, “Yes, we are doing this intimate scene. We’re showing this relationship, or we’re taking advantage of what a montage of lovemaking can give you without having dialogue about just where the state of this relationship and then using that contrast in this bathroom scene to show from that perspective.” She’s throwing him up against the wall. It’s coming from her desperation. It’s a scene that you’ve seen before—the sexy bathroom scene—but there’s something different happening.

Q: “Unforgettable” delves into a scary contemporary issue, which is online privacy, and both women spy on each other. Can you talk a little bit about that aspect of incorporating cyberstalking into the film and your concerns regarding protecting your online privacy?

Dawson: I found it very fascinating. This whole movie is about people trying to have secrets and protecting themselves and not sharing a lot about themselves and being very pointed and thoughtful about what they do. Because of that though, and the walls that are put up, the opportunities are missed for these people to relate to each other, and so they’re kind of forced into this situation where they’re alone. Rather than in person asking, they’re by themselves, resorting to, “Let’s look up, show me Tessa’s school records.” Rather than directly asking that person, they’re trying to find that information out and use that information against each other. There’s a serious conversation that we need to have around privacy and boundaries, and also just about honesty and what we are willing to share.

Right now, we’ve got Congress considering a bill that would allow corporations to look at our browsing history—anything—without our consent. Big Brother is doing that on a regular basis and doing it for the “greater good” of being able to see our spending habits and all this supposed stuff. There are some obvious benefits to augmented-reality and the things that come from that, but there’s also the question of what are we giving up? We don’t really know, because we’ve never seen this landscape before. Ultimately, the opportunity that is missing constantly is us being able to relate to each other, find commonality and not use this information against each other. We want to have trust. We want to have safety and this definitely shows you the different ways that we could have explored it and the tools that we could be using, rather than crutches or weapons.