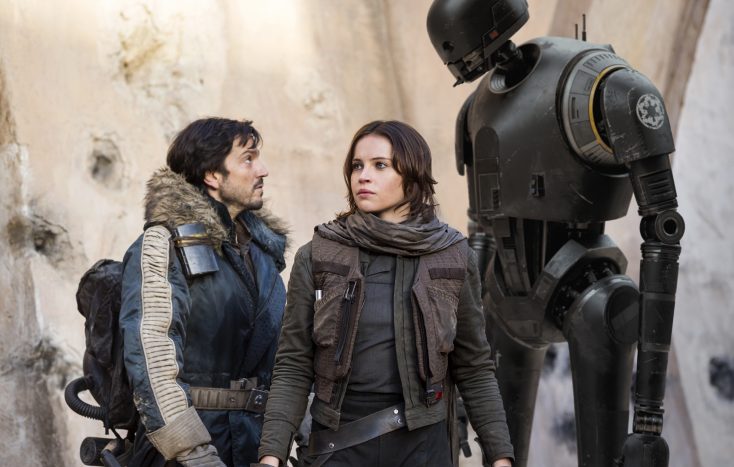 HOLLYWOOD—It’s hard to believe that George Lucas’ original “Star Wars” first landed in theaters nearly 40 years ago, and has since hyperdrived into an international beloved pop culture phenomenon. The original popcorn flick about a group of space rebels fighting an oppressive galactic regime and its fearsome black-clad leader has spawned six subsequent films, including three prequels and a sequel to the original trilogy (not to mention TV show spinoff and more). Now comes “Rogue One: A Star Wars Story,” which as its title suggests both stands apart from the previous movie iterations, giving the filmmakers an opportunity to create new characters and new worlds, and yet remains firmly connected to the “Star Wars” universe.

Like 2015’s “Star Wars: The Force Awakens,” “Rogue One” centers on a female protagonist Jyn Erso (U.K.’s Felicity Jones, “The Theory of Everything,” “The Amazing Spider-Man”), who has a deep and reasonable loathing of the Empire. Ripped away from her parents as a child, she has been imprisoned for much of her young life. Initially she was cared for by an extremist rebel (Forest Whitaker), but then escapes a disaster and leads a group of rebels in their quest to retrieve the plans for the Empire’s planet killer Death Star. The sci-fi action movie also stars Diego Luna, Alan Tudyk, Mads Mikkelsen, Riz Ahmed, Donnie Yen, Jimmy Smits and Ben Mendelsohn. The film is directed by Gareth Edwards (“Godzilla”) from a screenplay by Chris Weitz and Tony Gilroy, based on a story by John Knoll and Gary Whitta.

Edwards, along with Jones and some of the other stars of the film recently spoke at a press conference about making the new film.

Q: The tone of “Rogue One” is so much different from previous “Star Wars” films. It’s more a war movie and a heist movie. Gareth, how did you come up with a different tone and yet still have it feel like “Star Wars” movie?

Edwards: We essentially got license to be different on this movie and take a risk. The great thing about being a standalone film is we don’t really have to exist for other movies to continue, and so we could be brave and that’s what we did. I feel like in terms of “Star Wars” that I love, tonally, I guess the one were like aiming for was something like “The Empire Strikes Back,” where our movie, even though we take it quite seriously, there’s a lot of fun and humor in it, and hope is the key thing—that it’s about trying to achieve something. The story really behind the movie is like all these different people from all these different backgrounds that have very little in common, if they believe in a good, a future for the world, they could come together and we all are better off when we work together than on our own. So we just tried to make the most realistic version of “Star Wars” that we’d seen and it involved a lot of different techniques

Q: There’s a scene in the film where Diego Luna’s Cassian character just has to stand back and watch Jyn fight Stormtroopers. Felicity, how you feel seeing yourself do that and was the process of finding Jyn for you about finding your inner warrior that you didn’t know you had?

Jones: Yeah. Well, it’s in Jyn’s head. It’s very clear. She hates the Empire. So anytime she sees Stormtroopers she has this kind of a very clear instinct to take them down. So I just tapped into that, into that energy that Jyn has. I’d never done that kind of thing before. It was very new, the whole kind of physical preparation, that side of acting. I’m kind of used to lots of talking in corsets so it was really nice to be running around with a blaster and a baton to bash Stormtroopers with.

It was an extraordinary process and you work very closely with the stunt team who take you through every kind of move and moment and support you throughout the whole thing.

Q: Ben, can you talk a little bit about working with the actor in the iconic Darth Vader costume?

Mendelsohn: The first thing you have to do is just get over the fact that you’re doing a scene with Darth Vader, and that took me a little while, because I’m a first generation fanboy. It took a little while to feel like I could answer him with some solidity, like we could have a discussion, as it were. That took a little while. Also Darth, his gestures and his mannerisms are so familiar that finding someone that can execute that in a way that is fluid is its own skill set, and so that requires a certain amount of thought and consideration too when you’re doing it.

Q: Mads, your character Galen Erso is a kind of a complicated. He’s involved with bad things but he’s not necessarily a villain. What kind of approach do you have to like a character with that sort of complexity?

Mikkelsen: As actors we always try to find like the two sides of a character, but definitely it’s in this one because he’s working together with this gentleman something that he believes from the very beginning as a project that has the ability to change the world into a better place.

Q: Riz, you play Jyn’s rebel colleague and Alan, you play their adversary K-2SO. What are your thoughts on getting your first action figures?

Ahmed: I was very pleased because I think he’s a lot better looking than I am. They accidentally modeled it on Diego or something, which can we be easily confused. (He laughs.) Yeah, it was a kind of surreal, amazing moment, to be honest. I remember kind of playing with those toys as a kid and so to be part of that universe, you know, in plastic, is an amazing thing. It’s slightly narcissistic but yeah, I’m for giving everyone little versions of me for Christmas.

Tudyk: It’s a selling point, for sure. Mine is a lot bigger than (Riz’s), I should say. Maybe that’s what that’s about. There’s one that’s like this tall and I have it sitting on my couch, just kind of chillin’, chillin’ at home. K-2SO is just there. It’s neat. They don’t just make one action figure of you; there’s like five. And a car, although I don’t have a car yet. But, yeah, it’s pretty exciting.

Q: Gareth, you’ve been a “Star Wars” fan pretty much your whole life, so the lead up to “Rogue One” has been a pretty long road. Now that people are seeing the movie and you’re getting feedback, how do you feel?

Edwards: It’s strange. This is a very strange period in making a film, this little moment here, because for about two and a half years you’re really busy making it and your head’s down and you can’t really think about anything else. And now we’ve finished the movie but we haven’t released it. I feel like we’re a little bit pregnant and we’re just ready to give birth and share it with the world.

Tags:Alan Tudyk, diego luna, Felicity Jones, Gareth Edwards, Mads Mikkelsen, Riz Ahmed, Rogue One, Rogue One: A Star Wars Story
Previous PostPhotos: Be Sure to RSVP for ‘Office Christmas Party’
Next PostPhotos: ‘Rogue One’ Cast and Director: The Force is With Them