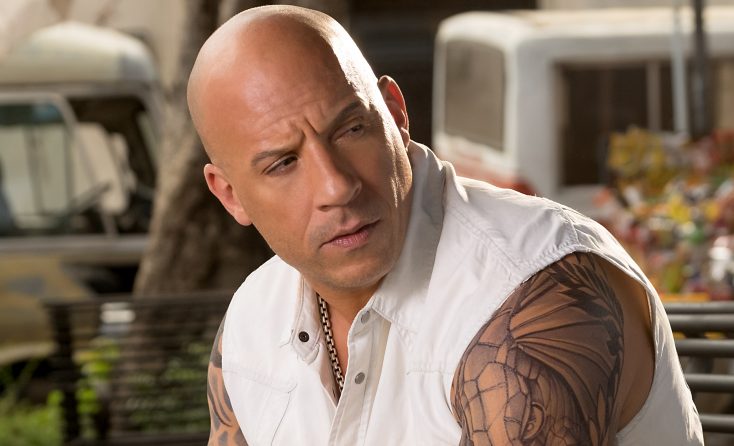 “Return of Xander Cage” finds the extreme athlete-turned government operative coming out of a self-imposed exile when it appears that a program leader Gibbons (Samuel L. Jackson reprising his role) is taken out by an intentionally downed satellite. Xander assembles a team of like-minded extreme sports enthusiasts to track down and recover a seemingly unstoppable weapon called Pandora’s Box. They have to accomplish their mission before another group, led by alpha warrior Xiang (Yen) and his ruthless team, finds it first. D.J. Caruso (“Disturbia”) directs the third installment of this popular franchise from a screenplay by F. Scott Frazier.

At a high-energy press conference, Diesel, dressed casually in a plaid shirt and jeans, talked about returning to the action-spy thriller franchise and raved about working with an international cast. (Diesel also is a producer on the film.)

Diesel: I felt like—my sister told me not to say this but I will—I needed to do “xXx” for myself. I needed to play a character that I could laugh again and smile again and really enjoy myself. I also felt like it was time to introduce to the world a global cast in the way we’ve introduced the world to a global cast. There’s something so cool about the idea of going into other film markets and recruiting their celebrated heroes and incorporating them into this franchise. In addition to that, I don’t think people have been having that much fun in movies.

Q: You’ve got quite an international cast. Can you talk about your co-stars?

Diesel: That was something DJ Caruso was really adamant (about) and it was very ambitious to put a cast like this together. I’d been a fan of Donnie (Yen) for quite some time. The idea of bringing him into this kind of franchise just felt new and fresh and right. There are so many different styles (of martial arts fighting in this). The way Donnie approaches a combat sequence is different from the way Michael Bisping approaches and the way that Tony Jaa would approach it, or any of the characters.

I knew Deepika (Padukone) from a screen test from a few years earlier for “Furious 7,” and to go into Bollywood and get the queen of Bollywood and to bring her into our cast was so so cool. It just keeps going. This was Nicky Jam’s first time in a movie, and he killed it. (Former Miss Colombia) Ariadna Gutierrez, it was her first time in a movie. Michael Bisping was just a monster in the movie. Tony Jaa, his fighting style is great. We’ve seen him and we’ve been in awe of him. I remember Quentin Tarantino talking about Tony Jaa in my living room, saying, “You’ve got to see him in ‘Ong-Bak.’ He’s so incredible.” And he was my good luck charm in “Furious 7.” So, when he came to this cast, I knew, as my son says, “this is going to be a giant hit.”

You just look across the board—going into Bollywood and (Bulgarian actress) Nina Dobrev (who plays pretty nerd operative Becky) comes in and she wanted to audition for a role that is not her type. It’s a real comedic role. And you see her there, you see her beauty and you go, “how is she’s going to be so funny?” And then she comes in and grabs a hold of that role and you can stop laughing when you see her on screen. She just had that presence.

And then DJ (Caruso) says, “I’ve got this guy, Tony Gonzales, coming in.” And I asked, “You mean the most incredible tight end?” And he said, “Yeah, he’s going to be incredible in the movie. So Tony comes in and he kills it in the movie and brings something incredibly fresh. Hermione is yet another incredible force in the film. She comes in and kills it. And then my little brother, Kris Wu, who’s never done an American film before, comes in and the second we start filming and we do our first scene together, everyone on set goes, “You guys have known each other for 10 years.” I want to take a minute to thank God for this incredible cast. And there’s the goddess Ruby Rose. That relationship between her (character) Adele and Xander is not like anything you’ve seen on film. There is so much unconditional love and it’s such a gender-irrelevant bromance, it’s so powerful and it’s so today, and we were very conscious of establishing that relationship. And to see that play out in the film is just remarkable. Again, thank you God it was an amazing cast.

Q: There were so many styles of martial arts used in this. What did you learn from Donnie Yen?

Diesel: We were trying to be really ambitious with the Xander character, and we created something called MxMa, which is something you’ve never heard of, and Bisping will tell you it’s something he’s never heard of, but the idea behind it is martial arts with a motocross bike. In that sequence where Xander’s fighting, he’s beating you up with his motocross. We wanted to create that unique style for Xander.

Q: What was it like getting UFC Middleweight champion fighter Michael Bisping in the cast? Did you feel like a genius in signing him?

Diesel: You are so right. He was filming and we all film very intensely. One of the reasons why the film is because we had so much fun making it but it doesn’t take away from how much effort everyone put into every aspect of it. There were moments when I would be doing a fight sequence, and Michael would say, “No, let’s add this” or “let’s use that,” and he’d bring in his expertise. He’s had more fights in the UFC than anybody. One day he is going to tell his story and his true story is, in my view, one of the most fascinating and compelling stories of any fighter ever in any combat sport. There was a great power on set. There were so many great things that happened to (our cast) once they left our set because there was so much love on set. I remember talking to him when he got the call. He got the call while he was filming. I personally said to him you’re going to win this fight because that’s how destiny works somehow. He said, “Vin, you’re right. I’m going to win the fight.”

Q: Besides your bromance with Ruby Rose, there’s definitely a connection you have with Nicky Jam. Did you have fun with Nicky?

Diesel: We’re always having fun. I gotta say, the bromance is true. My daughter Pauline, whenever she sees Nicky, she remembers him because when we were shooting in the Dominican Republic, she was drawing rainbows with Nicky. So now when she sees him she says “Rainbow.”

Q: You have a sizable Asian cast. What did you learn from them? How did you find the Asian attitude?

Diesel: What did I find with their attitude? I’ve got to be honest I don’t think of people’s nationality too much. I look at everybody the same. I’d gone to China for “Furious 7” and fell in love with China. It’s impossible for me to say one group of people over another or separate groups of people like that. Maybe it’s because I was raised in New York City, which is this melting pot and everybody was (different). The point of my whole film existence is to say “We’re just one race,” and the essence of this movie is global harmony.

I could say, specifically, outside of the culture, working with Kris Wu, there’s so much we have in common that when we went to work it felt like a pure natural brotherhood. When Donnie and I met, it must have been 60 seconds when we started talking about our kids. We looked at each other and said, “Oh my God, so you do it all for your kids (too)?” And our kids were running around and we’re giving presents to the other’s kids. It was so clear that we both were driven by wanting to make our children proud with our work. In Hollywood, I sometimes get a bad rep for being a perfectionist. (That’s a trait) that’s not always welcomed in Hollywood, because you’re always pushing people, and pushing yourself to be the best you can be. In working with Donnie, I immediately saw a kindred spirit. I saw somebody that was unafraid and unashamed to strive for perfection in what he does and what he delivers to the world. So there was synchronicity in that. With Tony Jaa, right from the very beginning, some of my favorite moments in (making) “Furious 7” were when I was training with him. He has such a master-like approach. He has such a gentle approach in the way he gets you to do things that you never thought you could do, because of his gentle spirit. His spirituality is something I connected with immediately. He included spirituality, and that’s something that I can identify with, and something I think is beautiful, and what connects us. So I can’t go white, Indian, Latin, Asian. For me and my existence, if I’m anything, I’m inclusive of everyone and we are just one, and I hope the global harmony is represented in this movie.