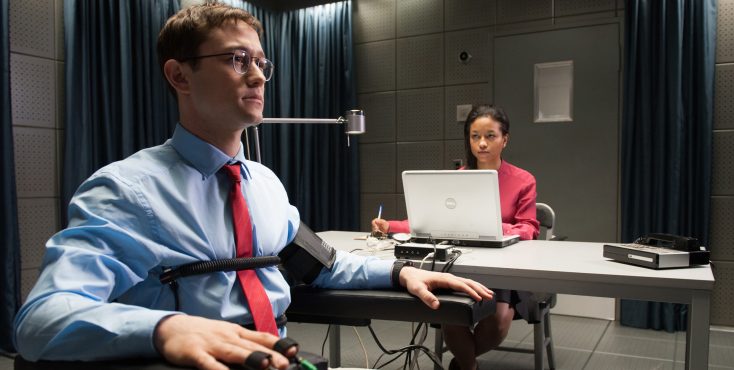 HOLLYWOOD—Filmmaker Oliver Stone is no stranger to taking on controversial subject matter and turning it into big screen box office success. The three time Oscar winner has addressed in this films sensitive subjects ranging from the Vietnam War to the Kennedy assassination to U.S. policy in Latin America. He’s been accused of glorifying criminal behavior and oversimplifying or giving a narrow, one-sided views of historical events.

In person, the native New Yorker is charming and knowledgeable but occasionally speaks before he thinks. During a press roundtable, he manages to offend both a Japanese reporter and a Puerto Rican correspondent, without, perhaps, realizing it.

In “Snowden,” Stone tackles the tricky subject matter of Edward Snowden, the one-time CIA computer expert and subsequent government contractor who revealed sensitive government secrets to the media in 2013, ostensibly to shed light on inappropriate information gathering. Snowden is now in Russia, unable to return to the U.S. where he faces federal prosecution.

The 70-year-old filmmaker says he only thought of Gordon-Levitt for the role after meeting with Snowden on several occasions.

Q: There appears to be parallels between “Snowden” and “Born on The Fourth of July,” in which a one-time patriot feels betrayed by his country and decides to publicly voice his dismay. Did you think of that when you were making this?

Stone: It occurred to me, yeah. In fact, after my three meetings with Snowden over those months, when we started to write the screenplay, Kieran (Fitzgerald, the co-writer) and I thought we should stick to the linear structure on this. There was a difference in “Born.” That was a complicated book. And we decided to go linear. From Ron Kovic’s youth to the end there in ‘76.

With this, we wanted to go back to Hong Kong, because Hong Kong is so important. Would they ever publish (the data Snowden had secretly collected)? Would they ever release it? That became the point of contention, in addition to his own story. So we decided to go eight times to Hong Kong. On the sixth time, they released the documents. That was a tremendous relief to them. He could have been buried if it had not been for Glenn Greenwald (Zachary Quinto’s character) pushing hard to get it out. The Guardian definitely was positive about it. But the Guardian would have been under tremendous pressure from the British government and they were. They can close you down.

Q: What was Snowden’s reaction, to your initial phone call? What was your first meeting like?

Stone: First of all, there was no such phone call. I was invited to Moscow by his lawyer. One of the things was he had written a book, a fiction book about him. American defector comes to Russia in exile running from the intelligence community who are chasing him. Meets with a lawyer and they have a series of discussions in a basement, which never happened. It’s a very fanciful but interesting novel. And it has Dostoevsky-like long conversations in Russian style about the Orwellian state. What you do to resist this kind of mindset.

My first visit with him was in late January and he was weary and I was weary because I didn’t know if I wanted to get involved. These contemporary stories are so difficult because things happen. There are lawsuits out of the blue.

It takes a year or two to make a movie. It took two and a half in this case. It could’ve blown up in our face. It still can, by the way. (In making 1995’s “Nixon”), I waited until Nixon died.

It took time to get to know (Snowden), to break the ice. We could’ve gone fiction. I knew that in my head I always had that option. If I am going to do this I can go the James Bond road and have him eluding pursers in Russia. Or you can have him even hiding in the United States. He sneaks back in and he hides in Kansas or something. There are all kinds of storylines you can follow. So that was a possibility. You can tell the story that way and make these somewhat similar points. I went back two more times to Moscow. By May, I felt like he would cooperate, and he was giving us very, very interesting information. So I brought Kieran Fitzgerald, my co-writer, and he shared a lot with us and trusted us. He took us all the way through.

I went to Moscow nine times, which was very helpful. There was a lot of journalism (on him) and a lot of it was inaccurate. There was a book from the Guardian. Even that was not all right. It’s been corrected now. The book, for the record, it’s been corrected. There’s a revised addition. But there were a lot of things that were breaking news. So it’s hard to put that story together from all these sources. We spoke to witnesses and to people that knew him.

Q: Did you say something that he wanted you to say?

Stone: No, he never imposed. He would be critical of the result. But he never said, “No, I want to get this point across.” His actions had been his point. He was very modest about it. If he could he would have kept his name out of it, but the whole point of the thing was to make himself visible, to say, “I did this and I did it knowingly and I’m responsible for it. But this is what I believe. My conscious says that there’s a higher law than this and it is my oath to the constitution.” So he had to get himself known and when he made himself known that’s a key moment. “I am Edward Snowden on TV.” He was giving up everything—his family and, above all, Lindsay Mills. He thought he had to end that relationship, and he did. And then, of course, things turned out pretty wild for him because she did stick to him and go back to Moscow

Q: How did you pick Joseph Gordon Levitt to play Snowden?

Stone: First choice. He was always my first choice. I didn’t know him at all. I’ve seen him in movies, and just felt he could do it. He felt like the guy. He’s also computer-addicted. He’s done a lot of Twitter. I just thought there was something about him that felt right. I never doubted it all the way through. It’s funny, usually you have a little chase with actors, but no one else could have done it in my opinion the same way.

Q: What’s the dramatic link between this and films like “JFK” and “Nixon,” which dealt with vast shadow areas of the government that you don’t really know what they’re doing?

Stone: “Shadow areas” is a good term. This was an enormous revelation that he did. These programs are far more complicated and significant than we even knew at that time. First of all, very few people can get into that depth, and we learned not only about illegal mass surveillance all over the world but we also learned about cyber warfare. (Snowden) was one of the first to break this news, that what we were doing there, and that it was Obama’s initiative. It was called Boundless Informant. It’s beyond boundless now; it’s reached insanity proportions. We hacked. We declared cyber warfare without admitting it on Iran in 2007 with the Stuxnet virus, which never stopped. We boasted about it but the truth was, it was a disaster. And they kept going. They opened up the gates on a new weapon, much like the atomic bomb did in 1945. Same thing has happened with cyber warfare. So we miscalculated on this one. This is really a terrible weapon. What happens is that war results, and I think that Snowden has put his finger on a lot of stuff.

(At this point, he notices a baby seal charm on a recorder and begins toying with it.) You know, the Japanese, they always love these little things. I don’t know what it is. You always add little things to this. I mean it’s so weird your culture.

Q: Maybe you can make movie about that.

Stone: Yeah, about Pokémon. You guys are weird. Go ahead, keep going.

Q: So when you first heard the breaking news about Snowden, where were you, and what was your first reaction?

Stone: I was like every other citizen; I thought it was quite revelatory. I applauded it as a citizen because I think transparency is what Obama promised and it was Snowden who delivered it. It certainly was not Obama. Obama prosecuted eight whistleblowers under the Espionage Act. So he lied, or whatever you want to call it. He won a lot of votes, and people thought he was about change, but he didn’t bring it. So the movie shows you Obama at different stages. You see the whistleblower and the president.

But you’re asking, the question is, where was I? It’s not because I wanted to make a movie. On the contrary, I stay away from current affairs. It was only because I got that phone call a few months later. Glenn Greenwald asked me to look at his book. I wasn’t interested. It was only because of the phone call and the chance to meet Snowden, that’s why I went over there. I wasn’t chasing the news at all. I avoid these kinds of things.

Q: This is coming out just before the U.S. Presidential election. You see Hillary Clinton, George W. Bush and President Obama in this—the whole political spectrum. What was the reason for it?

Stone: We tried to show the blend of opinions. Obviously, in America, it was negative for the most part, the majority. It shows some positive comments like (Sen.) Bernie Sanders. But in Europe, it was much more pro-Snowden in Germany, especially. Remember that? We didn’t think about the election because, frankly, we were scheduled to release this in May. Tom Ortenberg of Open Road (Films) changed the release to September because it was a better date for him. Anyway, I am very happy he did it, because no major (studio) wanted to release the movie or make it.