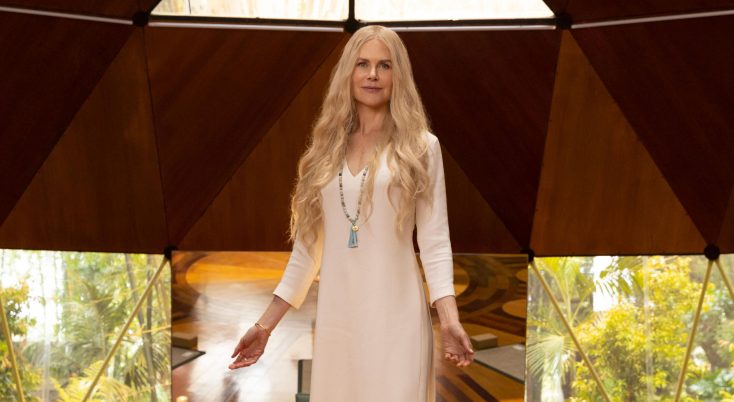 HOLLYWOOD—Hulu’s new miniseries, “Nine Perfect Strangers,” is based on the “New York Times” bestselling novel of the same name by Australian author Liane Moriarty. It spotlights a group of people, all yearning for mental and emotional help, at a health-and-wellness resort called Tranquillum House. It is run by a mysterious Russian named Masha Dmitrichenko (Nicole Kidman). Among her new patients are Frances Welty (Melissa McCarthy), a stressed out romantic novelist whose life is in free fall and Tony Hogburn (Bobby Cannavale), an addict who signed up impulsively for the 10-day retreat.

The eight-part series was written by David E. Kelley (“The Undoing”) John Henry Butterworth (“Ford v Ferrari”) and Samantha Strauss (“The End”) and directed by Jonathan Levine (“50/50”). It begins streaming on Hulu Wednesday Aug. 18. The interviews were conducted via Zoom for the Television Critics Association.

Q: Melissa McCarthy, this show touches on the current landscape of “wellness,” and the lengths we go in pursuit of it. Your character, Frances, says, “I don’t want to suffer,” and Masha tells her, “You’re already suffering.” What did doing this series teach you?

Melissa McCarthy: I think you think a lot about what you do to cover up and mask your problems. After this last year and a half, masking things doesn’t make them better. And at some point, you have to get them out. You are already in the midst of being miserable and suffering, so make a change. That’s what I think this show is about. That line certainly encapsulates it.

Q: There’s a scene where the attendees dig their own ditches and are forced to lie in them. How was shooting that sequence?

McCarthy: It makes you think of the big questions. What will be changed when you’re gone? Who will care? What have you left behind? Have you made something better?

Q: Nicole Kidman, Masha is definitely a very mysterious character. How did you decide on the accent for her?

Nicole Kidman: I found the accent due to putting together her whole story and made it a Russian-American mix. She speaks seven languages just in case you didn’t know, even though I don’t speak seven languages in the show. It came slowly because we had a lot of time to work on it.

Q: How did you relate to the other actors as Masha? Did you stay in character?

Kidman: The first time I met everyone, I walked in as Masha and I never related to anybody in any other way. The first scene we shot was the scene where I come in the room and say, “I am Masha. Welcome to Tranquillum.”  I wanted a very calm healing energy to emanate all the time. I remember going over to people and putting my hand on their heart or holding their hand. They would talk to me or use my name, Nicole, and I would completely ignore it. I’d only respond to Masha. The only way I could actually relate to people was that way because I felt like, otherwise, I would be doing a performance, and I didn’t want to feel that way. Each person would come and do their scenes with me in my rooms, and I would create a different space for them. So it was a really weird place to exist. But that was the way in which I could do the performance. I’m bat shit crazy.

McCarthy: In a wonderful way, though.

Kidman: On the first day, we had a koala in the tree.

McCarthy: And they’re docile only because they’re high as a kite from the eucalyptus. Fun facts!

Kidman: But we can all still say, “Go to Byron Bay.” This place is in existence. Its owner exists.

Kidman: It was extraordinary to be shooting there. I think the magical quality of the environment really helped us. I’m a huge believer in using what you have to penetrate the show and the performance. It was like one of those things where you walk in and you go, “Is this real?” We existed in this dream state for almost six months and then we left. It was kind of weird and magical.

Q: Nicole, I think you were one of the first major Hollywood film stars to embrace the idea of doing television, either films or limited series. What did you see ahead of your peers about recognizing television is not something to abandon after you had success in film?

Kidman: Primarily, what I’ve done on television there’s been one director at the helm, so it’s been their vision. So I see it as an extension of film. For me it’s more like extended cinematic storytelling.

Q: What about you Melissa? You continued to do a sitcom after the success of “Bridesmaids.”

McCarthy: I think there’s an amazing opportunity when you can play a character longer. You can go from A to Z when you have three years of a show, that you couldn’t quite compact the same way in a film. Just the luxury of having more time to tell that story and to show real changes is exciting for me.

Kidman: And you have to be really rigorous with it. Jane Campion, who’s a good friend of mine, did “Top of the Lake.” And I remember going on a walk with Jane and she was saying, “It’s incredibly hard to keep a storyline vibrant and alive through a six or eight hour episode storytelling.” People forget that that is an art form in itself. When you have 90 minutes or two hours to tell your story, that’s very different than trying to keep (a narrative) compelling, intriguing and hypnotizing over the course of a much longer time span. That’s why I’ve done four shows with David (E. Kelley).