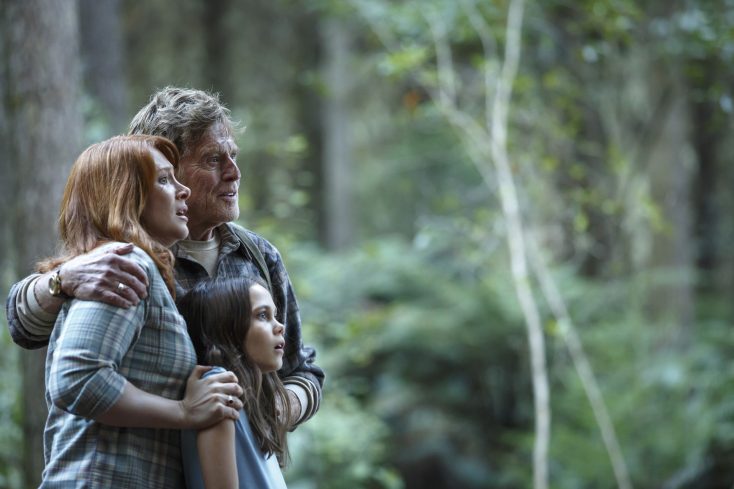 HOLLYWOOD—Though Disney’s rebooted “Pete’s Dragon” is set in the U.S. Pacific Northwest, it actually was shot in far away New Zealand.

The family adventure film reimagines the 1977 classic, and like that earlier film combines live action with animation. The new one’s visual effects are significantly more eye-popping and realistic than they were nearly 40 years ago. The story too has changed quite a bit, although it remains centers on a boy named Pete and his faithful dragon friend Elliot.

Starring Bryce Dallas Howard (“Jurassic World”), rising star Oakes Fegley (“This is Where I Leave You”), Wes Bentley (“The Hunger Games”), Karl Urban (“Star Trek”), Oona Laurence (“Southpaw”) and Oscar winner Robert Redford (“Captain America: The Winter Soldier”), the film is directed by David Lowery (“Ain’t Them Bodies Saints”), based on a screenplay he wrote with Toby Halbrooks, which in turn is based on Malcolm Marmorstein’s original script.

Pete (Fegley) has lived in the forest for years with only a giant dragon he calls Elliot for company. When Grace, a local park ranger (Howard), discovers the feral boy living in the wild, she takes it upon herself to try and put the orphan in child protective services. Meanwhile, a greedy developer wants to cut down part of the forest, which is home to Elliot. When he discovers the fantastic beast, he decides there may be another opportunity to make some money and arranges to capture it. That’s when Grace, her father Meacham (Redford) and the kids set off on a mission to rescue Elliot and return him to his home.

“New Zealand is a country with a smile on its face,” says Redford who, as Meacham, is a local storyteller who gets caught up in the mission to save Pete’s beloved dragon from captivity. “I came away with that phrase in my head,” he says. “I would imagine that New Zealand today is the way America was when I was a little kid, where people bonded together. There was community work and there was joy and there was happiness. It’s a can-do thing.”

“Pete’s Dragon” filmed on locations throughout New Zealand, including the Rotorua District, Tapanui in West Otago and Stone Street Studios in Wellington. The production was a significant boost to the country’s ever-growing film industry, which has notably served as a backdrop for other major Hollywood films including “The Lord of the Rings” and “The Hobbit” franchises.

While filming at Redwoods Forest in Rotorua, Howard and Bentley (who plays her lumberjack boyfriend, Jack), took their families on a 40-minute flight north to Auckland, New Zealand’s largest city, also known as the “City of Sails.” From there they jumped on a ferry over to Waiheke Island, an island paradise only 35 minutes across the water from the bustling city.

Urban, who was born and raised in Wellington, the country’s picturesque capital, and is best known for his role as Dr. Leonard “Bones” McCoy in the rebooted “Star Trek” franchise, couldn’t have been more proud to work with his fellow Kiwis on the production alongside big Hollywood stars.

“We have some of the best crews in the world,” he boasts. “That was reiterated by Mr. Redford in my conversations with him. It absolution stands to reason when you think about what New Zealand film technicians have actually contributed to international cinema over the past decade.”

For “Pete’s Dragon,” New Zealanders comprised 80 percent of the production crew (more than 800 people) and of the 40 cast members, 31 were native New Zealanders, including Urban, who plays a developer who has his sights on deforesting the area where Pete’s dragon, Elliot, lives.

Filming in New Zealand continues the longstanding relationship the Walt Disney Studios has had with the country, which began in the 1980s, and has included several Disney productions, including the family-friendly “Chronicles of Narnia” franchise.

The alpine resort town of Queenstown, in the country’s southern South Island, is one of the locations where the production filmed. Specifically, Deer Park Heights, just below The Remarkables mountain range, is where Pete watches as Elliot appears from beneath a cliff top to fly over him.

Most of the forest scenes were shot in Rotorua’s Redwoods Forest, a lush woodsy location that is frequented by hikers and mountain bikers.

Production for the film was based at Wellington’s Stone Street Studios in Miramar, Wellington’s film hub. Mount Victoria, located 10 minutes from Miramar, was used to film several of the forest scenes in the film.

Tapanui, in the Otaga region of the lower South Island, was transformed into the main street of the film’s quiet American town. In real life, Tapanui is a popular spot for anglers fishing for brown trout and sea salmon in the local rivers.

Barrie M. Osborne, the film’s executive producer, says the movie’s intention is to feel epic and magical, but also naturalistic.

“We didn’t want to create these forests in a computer,” he says. “We thought the audience would better embrace the story and the characters if they lived in a world that felt this pure and this beautiful and New Zealand really provided that look and feel.”