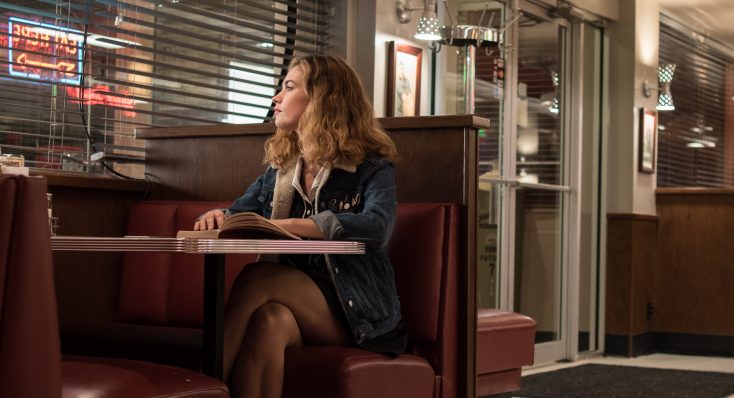 The 28-year-old enters the 21th century in Edgar Wright’s “Baby Driver,” playing one of the action-comedy’s few non-criminal characters. As Debora, she’s the kind-eyed, friendly waitress girlfriend of Baby (Ansel Elgort), the getaway driver for a crime ring leader named Doc (played by Kevin Spacey). She connects with Baby because of their mutual love of music and aspirations of escape from their present circumstances.

Wright, whose previous films include the popular “Shaun of the Dead,” “Scott Pilgrim vs. The World” and “Hot Fuzz,” says he was “charmed” by James in her audition.

“She inhabits this character,” the British filmmaker says of James.

Wright was so impressed by what he saw of James on tape that he sent it to his cinematographer, Bill Pope, without explanation. Pope’s two-word response to the writer/director: “hire her.”

James may be best known to TV audiences as the Crawley family’s rebellious cousin Lady Rose MacClare from “Downton Abbey,” but she is pleased to be offered acting options beyond period dramas and fantasies. At a recent interview, the actress, dressed in black and white silk blouse and white slacks, spoke about working on the action comedy, which also stars Oscar winner Jamie Foxx (“Ray”), “House of Cards’” Spacey and “Mad Men’s” Jon Hamm.

Q: You’ve gone from playing Desdemona onstage to playing Debora in this film. How does playing Shakespeare roles compare to your role as Debora? Is it more like work as opposed to fun?

James: When we were filming (“Baby Driver”) I was preparing to do “Romeo and Juliet” (on stage), so I was learning my lines in the car during our long night shoots. Edgar (Wright) has got this weird photographic memory. He did it at school and could remember more lines than me from “Romeo and Juliet,” because he’s, like, this crazy genius. I love both (Shakespeare and “Baby Driver”). They’re very different but also equally challenging. I think Shakespeare is really fun to do as an actor; but not always that fun to watch. (laughing) As an actor, it’s really enjoyable, so essential and dramatic.

Q: There’s some great driving stunts in this film. Was there a particular stunt or day that was most challenging to you?

James: Some of the more action-y stuff that we did. When I had to look over (from an upper level of a parking garage). It was really, really, really high. I had a rope attached to me because I had to get right to the edge to look down to make sure (Spoiler alert) Buddy (Hamm) was really, really dead. As if he wouldn’t be jumping from that height. He seemed to keep surviving so he was like a cat. I get bad vertigo so I was compelled to leap off into the burning car. That was scary. That was challenging.

Q: Did you relate to Debora? Would you stand up and defend the person you love from someone who is attacking them?

James: Yeah, I’d basically kill a guy and smack Buddy over the head. Also, at the end, (Spoiler alert) she is ready to drive through that police barricade or reverse back and keep people running to stay with the guy that she loves. From the good girl at the diner to the reckless one.

Q: What can you say about working with writer/director Edgar Wright? Your co-star Ansel Elgort called him “insanely nice.”

James: He goes above and beyond.

Q: The music is such a big part of this film. Had you heard many of the songs that are used in it before?

James: I still listen to the soundtrack all the time and I think it’s going to be (popular). People are going to really respond to the music. It opens up where you explore the artists’ albums, and it sort of opens up all of the doors. I think that Edgar has got such incredible taste in music; it’s so eclectic and so sort of one end to the other end of the spectrum.

Q: What was your favorite line of dialogue in the film?

James: I like that hat (tattoo that means) hate. Everybody likes hats. (laughing)

Q: If you could be in a previous Edgar Wright movie, which one would it be?

James: “Hot Fuzz” is my favorite.