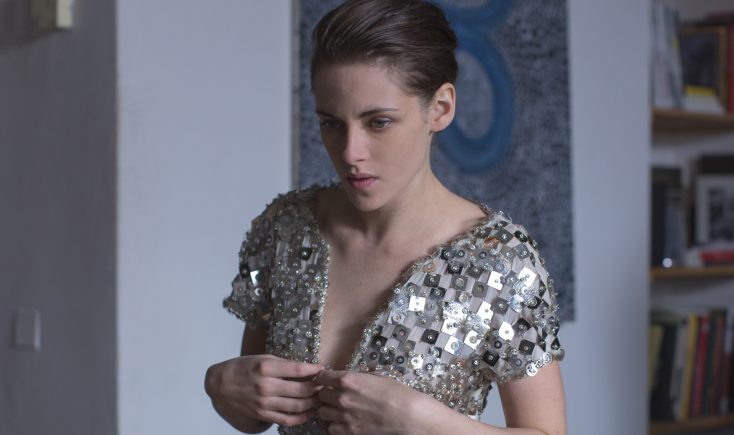 HOLLYWOOD—Actress Kristen Stewart and director Olivier Assayas are no strangers to one another. She starred in his 2014 drama “Clouds of Sils Maria,” in which Stewart garnered a Cesar Award (the equivalent of the French Oscar) for her performance in that film. The duo reunites in Olivier’s new psychological thriller, “Personal Shopper,” in which Stewart plays Maureen, an American working in Paris as a personal shopper for a globetrotting celebrity client. Maureen is preoccupied with connecting with her dead twin brother. Hoping for a sign, she begins to receive anonymous text messages and wonders if they are actually from her dead brother or other spiritual beings from beyond or whether someone is playing tricks on her. German actor Lars Eidinger, with whom she co-starred in Assayas’ previous film, and French actress Sigrid Bouaziz (“Pour La France”) also star.

For Stewart, best known for her role as Bella Swan in the “Twilight” film franchise, taking on the lead role in “Personal Shopper” wasn’t an easy decision. When she initially read the script, she feared she might not like it, even though Assayas assured her he wrote it specifically for her. After the first read, though, the actress was a bit perplexed and wanted to compare notes with the writer/director, but he explained that he wanted her to interpret it as they filmed it and to deliver her perception of the psychological thriller’s ambiguous ending.

Dressed in on olive-colored crop shirt with a black stripe, black jeans and a thin bomber jacket, hair pulled back and multiple rings adorning her fingers, Stewart was joined by the French filmmaker in a Beverly Hills hotel suite to talk about working together again on “Personal Shopper.”

Q: What your film nails is the overwhelming sense of loneliness and grief process. Where did the process begin with you?

Assayas: I suppose I had this image of this lonely girl in Paris trying to find consolation in her inner space. Something like that. Doing a job she dislikes in the fashion industry was always part of the character. But you know, it’s really like someone who works in something’s that is superficial. Something that’s frustrating that doesn’t give her the satisfaction and finds some protection in art, in her own imagination. The tensions of the two sides became accentuated in the process of writing the story because all of sudden it was someone doing this ultra-alienating job. I mean dressing someone else and trying to connect with another dimension. It has to do with connecting with her subconscious if we want to boil it to something.

Q: Kristen, where did you start with your character?

Stewart: It’s a strange place to start with someone too because usually this person would pre-exist you and you need to substantiate them with every answer of every question like where they from, who are they, what are they into, what are their hopes and dreams. But this person starts off utterly fragmented that the inexplicable definition of reality doesn’t allow her to exist. She is like, “If I can’t define existence, then who am I?”

Preparing for this was just being willing to be present in something that you cannot remotely define. She would love to be present and interact with people and find connections that are kind of like something that would feel comforting. But, she doesn’t exist so how could she. It’s about someone who goes through an early traumatic event. Traumatic events are catalysts essentially for ******* crisis.

Q: Do you see yourself as shopping junkie kind of person? How in touch are with the shopping and the clothes and fashion?

Q: Do you have a personal shopper?

Stewart: That’s funny. I guess certain celebrities would have that. People that are extraordinarily rich and strange. But I like clothes.

Assayas: I know people like that who work for people who have an actual (personal shopper) and who does a lot of representation and whose job includes doing a lot of red carpet stuff and you can’t be on the red carpet with exactly the same outfit every single time so you need someone who does that job for you who helps you with that. It kind of makes sense as crazy as it sounds if it has some kind of validity.

Q: Did get to keep any of the dresses that you wear in the film?

Stewart: I kept the harness-y one. Nobody can have that one.

Q: You’ve done independent films and mainstream film over the years. What is the biggest challenge for you going back and forth from these films? You always take on different roles.

Stewart: It’s funny. I don’t think I’ve done too many. I guess I could identify one or two times, but I can read really beautifully written scripts all day long, (but) that doesn’t mean there is going to be a part in it whether or not I fit the description physically, by age or gender. It doesn’t necessarily mean that’s in me or that it’s the right time for me to play that part.

I never bring anything than myself to different parts. You change the circumstances essentially, yes, (and) you’re changing the person but I never want to step outside of myself and represent a character in order to entertainment people or service a story. My main goal is to be stirred up by something and then allow it to reveal parts. I would really rather stumble upon discoveries in sort of unanswerable questions rather than package to people. I like working (and) I like to do it a lot.

Q: I know you like doing the work but also this kind of celebrity stuff makes you uncomfortable, sort of like your character in this a little bit. She has an “anti-celebrity” feel to it.

Stewart: I like that she was attracted to one thing that she thought was partially or potentially empty. There is a vanity to wanting to look good in clothes. There is this sort of self-obsessed thing that you have to have in order to be like, “Oh God. I imagine myself in that. I want to feel that.”

I know that feeling that nobody could wear that. I should be the one wearing that but then again at the same time that’s absurd and I don’t want to be that person who thinks like that. I feel that I have less trouble navigating that because I have access and choice, which is the luckiest thing in the world where she is in the position where she is attracted to something else and servicing this thing but is so much smaller than it and kind of resents it, but, at the same time, grand-izing it.

Assayas:  When I’m writing, what interests me with Kristen, as with any actor, is the real person so in the case of Kristen, in both movies, I’m throwing the burden of celebrity on someone else so she doesn’t have to carry it herself in the film.

Q: In the movie, we see different ways people deal with death. Does new technology (social media) change the way people remember the dead or deal with the process that they are no longer there?

Assayas: Well, yes it does in certainly a disturbing way. Movies have been about that in a certain way. It’s kind of interesting if you look at how, at the end of the 1950’s, all of a sudden you had the end of the studio system and you had indie films and you had this book by Kenneth Anger, “Hollywood Babylon,” which ultimately deals with the death of movie stars. He writes at that specific moment because that it’s that one moment you realize everything that was made in the silent era is about ghosts. I mean, those guys are gone. You see people who are alive. People who are actually dead. It’s not just technology. It’s the world of images that changes our relationship with the dead. The dead are still around in strange ways and especially in movies.

Q: Kristen, speaking a little bit about the visible and invisible, in your last film together, you played an assistant, which is sort of another invisible role in Hollywood. Are we supposed to see an emotional through line between these two films? Do you look at it that way when you play these characters?

Stewart: I guess from an outsiders’ perspective. I could look at these two movies and intellectually assess them and probably be like, “These are similarities and these came first.” But the process of making these movies, they had ******* nothing to do with one another, whatsoever. Maybe conceptualizing them is a different story.

Q: Olivier, do you see that as a filmmaker? Do you see emotional through lines?

Assayas: Those two films are completely different dynamics in a sense that one is really based on relationship between two women and the dynamics are really defined on how things function between Juliette (Binoche) and Kristen (in “Clouds of Sils Maria”), and some kind of energy that has to do with something of comedy. It’s both a movie that is a serious subject about aging and this and that. This is not a comedy but here and there, we’re allowed to laugh and smile but still it’s a movie about mourning about how we deal with death. It’s more about Kristen and Kristen. Kristen trying to struggle with something happening within herself. The logic of the film is radically different.

Q: Kristen, when you were reading the script, was there a specific part that was an “A-ha” moment, or was it the overall script that you liked?

Stewart: I would say I read the entire thing and got to the end and the line was roughly translated because he wrote in French and it was translated and sent over to me and so, like, the last line didn’t make sense. I didn’t know that line was coming but you were kind of waiting for something to crystalize in some way. It wasn’t happening, it wasn’t happening. Like, third to the last page, last page, last page, it was like and then there’s one line that ends it. I was like, what is that? What the **** does that even mean? I thought I was being tricked or something or that I was stupid that I didn’t understand and I knew what it should be and so that I knew that I understood my relationship with the movie and everyone has a different response to it because everyone has a different relationship to what reality is. I just knew what it should be and so in that moment I was like, “I cannot articulate everything that I feel about this, but I get it.”