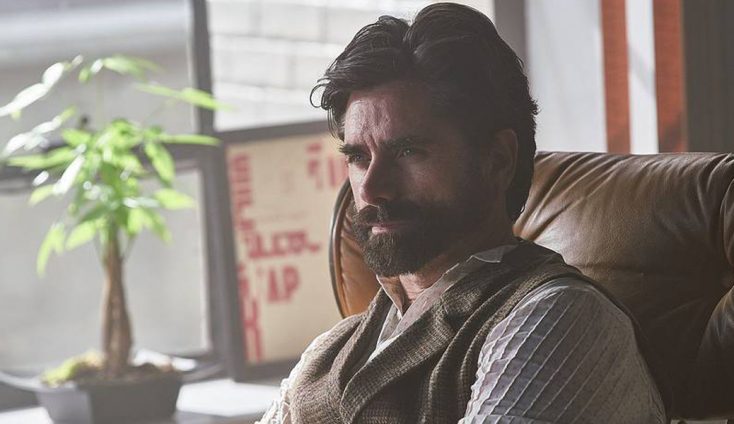 HOLLYWOOD—John Stamos, who began his career as teenage bad boy/heartthrob Blackie Parrish on the daytime drama “General Hospital,” is now the one treating patients in Lifetime’s upcoming psychological thriller “You.” The cable TV series, premiering on Sunday Sept. 9, is based Caroline Kepnis’ novel.

The preternaturally good-looking actor, known primarily for his comedy work on TV’s “Full House,” “Fuller House” and “Scream Queens,” has a recurring role on the series as therapist Dr. Nicky. Penn Badgley (“Gossip Girl”) stars as Joe, who manages a bookstore and becomes obsessed with a young writer named Guinevere (played by Elizabeth Lail, “Once Upon a Time”). He begins stalking Guinevere on social media to make her like him and isn’t too keen about Dr. Nicky’s influence on her.

As Lifetime Executive Vice President Tanya Lopez described the series at the 2018 Summer TCA Tour, “Boy meets girl. Boy falls in love with girl. Boy starts stalking girl. With the help of social media, he stalks her a little bit more. He makes the girl fall in love with him.”

“You” was created and co-executive produced by Greg Berlanti (“The Flash,” “Arrow”) and Sera Gamble (“Supernatural”). Lifetime has ordered a second season of the series, even before the show premiered. The first season was shot in New York, and the second will shoot in L.A.

Stamos, who earlier this year became a first-time father at age 54 with his second wife Caitlin McHugh, marveled at how different the world is since he began his career three decades ago.

With the decline of shopping malls as a hub for star sightings, he cheekily quipped, “Now, I’ve got to stay home and see how popular I am.”

With the advent of social media, in which fans can track your every movement and your photo can be snapped by anyone with a smartphone and posted for the world to see on Facebook, Twitter, Instagram and other social media platforms, maintaining privacy as a celebrity is all the more challenging, the actor said.

“We grew up at a time where you didn’t tell where you lived,” Stamos recalled.

Nevertheless, Stamos has other, more important priorities right now. The California native says he loves being a dad to Billy, who is five months old.

“I’ve waited a long time to be a father and it’s so far everything that I thought it would be,” he said. “He’s the only kid in America who doesn’t recognize me. But it’s been beautiful so far. It’s been really nice.”

Besides “You,” and learning the ins and outs of fatherhood, Stamos is busy producing projects including “Fuller House,” the follow up series to the one he starred in in the 1980s as Uncle Jesse. The show was renewed for a fourth season earlier this year. Asked why TV viewers enjoy reunion shows like his, “Roseanne,” “One Day at Time” and others, Stamos explains, “We’re living in an anxiety-riddled world right now, and I think people—I know this from “Fuller House”— just want comfort food. They want to go back to a place that made them feel safe, and maybe a little more of an innocent time, so I think that’s why some of these shows are working so much.”

Though he has no plans to reprise his Blackie character again from “General Hospital,” he remarked that his recurring role as TV music composer Jesse Katsopolis on “Fuller House” is “loosely based around that time and that world of soap operas.”