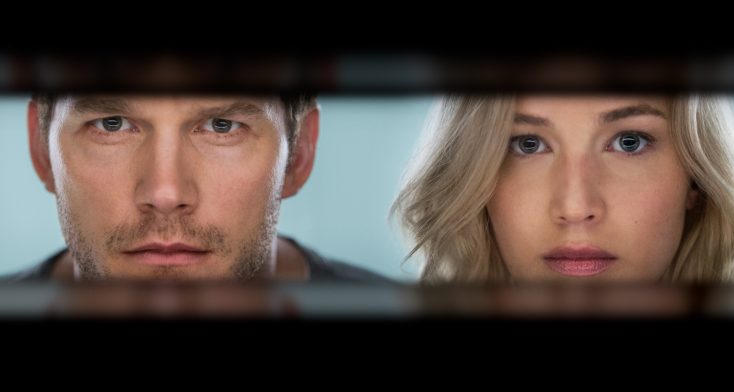 Lawrence, of course is known for her starring role in “The Hunger Games” franchise as well as being an Oscar winner for “Silver Linings Playbook.” Chris Pratt has zoomed from TV sitcom actor to feature film leading man since he starred in two popular popcorn flicks “Guardians of the Galaxy” and “Jurassic World.”

The film by Norwegian filmmaker Morten Tyldum is set aboard a spaceship full of sleeping passengers and crew bound for distant colony. With their arrival set for more than 100 years in the future, the humans lie in suspended animation in sleeping pods. When one of them accidentally awakens (Pratt) and can’t get back to sleep in his pod, and suffering from extreme loneliness he has to make the difficult decision of whether to awaken a beautiful fellow passenger (Lawrence), knowing he would be condemning her to die aboard the ship before it reaches its destination if he does so. Aside from that moral dilemma, passenger Jim must contend with the ship’s failing power system.

Lawrence and Pratt spoke together about their first time working together, doing the stunt work, “traveling” aboard the mostly practical spaceship Avalon and coffee creamer.

Q: Were you happy to work with Chris for the first time? And Chris, were you with Jennifer?

Lawrence: I had actually tried to work with him before. This wasn’t the first attempt I’d made because I’m a huge fan. I thought he was hilarious (on TV’s) “Parks and Recreation,” and then when I saw him in “Guardians of the Galaxy” and thought, ‘he’s a movie star!’ So, I was really excited when it finally came together with “Passengers.” Yeah, I was really excited.

Pratt: When I read the script originally, my manager said, “I want you to picture Jennifer Lawrence in the lead role,” and I was like “Yeah, right” but it ruined the movie for anyone else who would try (out for the part) because when I read it I was like, “Oh my God, this movie has to be Jennifer Lawrence,” and “If you’re going to let me do this movie and she would be willing to do this movie, oh my, that would be the greatest thing in history.” And she did it and I couldn’t believe it. I got to work with her and now she’s my best friend.

Q: Jennifer, what excited you about playing the role of Aurora?

Lawrence: Performance-wise, I was really excited. There’s a lot of really powerful stuff that my character goes through and it’s also just an interesting emotional concept of realizing where you’re going to spend the rest of your life and there is nothing you can do about it. So, that was exciting to me.

Q: And you Chris? What attracted you to do this movie, other than Jennifer being in it?

Pratt: This kind of movie is nice because it has elements of action and drama and romance and suspense and, because of that, you get the opportunity to try different things as an actor. One day you are hanging from wires and the next day you’re doing an emotional scene or you’re doing a romantic scene. It was really an opportunity to play a lot of different notes and that’s really fun for an actor and I got to do it with…

Pratt: I did for a minute.

Q: Chris, could you talk about the movie and your character Jim?

Pratt: In this movie you find these two characters who are seeking out a new life on a distant planet and the reason my character is on this journey is because he’s leaving behind a world that no longer needs men like him. He works with his hands, he building and fixes things. He’s a problem-solver and he’s leaving a world when, if something breaks, you just replace it. He’s a pioneer and has longed for a time when his type of problem-solving abilities and his skill set can be useful so he wants to go somewhere where he can build a house out of nothing and I think he longs for a simpler time and he expects to find that on this new planet.

Q: So he has a sense of humor too?

Pratt: I wouldn’t say Jim is funny per se. He’s not necessarily a comedian by any means but, hopefully, there’s some humor in watching him in this situation. He’s not going to open a stand up comedy club on Homestead 2 (the new colony planet), but hopefully you will laugh a little bit when you see some of the situations he’s in.

Lawrence: Aurora is a writer. One of the things that I like about this movie is that it’s not post-apocalyptic. Earth is not in a dire state. That’s not why we’re travelling through space. Earth is fine. Aurora is an adventurer and she pushes herself so she wants to be the first person ever to fly to Homestead 2, the colony planet, live there for a year then come back to Earth and write about it. She’s very ambitious and that can be quite a roadblock.

Q: What are the themes or messages of the movie?

Pratt: We’re stuck together in isolation so there’s loneliness and solitude and all of the themes that float through this movie: deception, guilt, redemption as well as love, forgiveness and grace. They’re all very personal themes and that’s what’s really nice about sci-fi is that it asks questions that you can’t ask in regular storytelling but the answers often have to do with personal struggles and human emotions, desires and wants and whatnot.

Q: Does it explore how two people would react in this weird situation?

Q: Can you talk about the amazing sets? A lot of that was real, not all CGI.

Lawrence: The sets were incredible. Every day we’d show up and there’d be something different. It was just so massive.

Pratt: Yeah, the starship Avalon itself is a massive, massive ship and we built sets in Atlanta and at (Britain’s) Pinewood Studios. We actually had to tear a wall down between two sets to build the largest single set they’ve had there. The interior concourse of the starship Avalon is beautiful.

A lot of times in movies like this there are elements of CGI but we had some amazing practical sets and Rodrigo Prieto, our D.P. (Director of Photography) and the electric crew and gaffers on this, they put in eight miles of L.E.D. lighting on it.

Lawrence: I didn’t even know that. Wow!

Pratt: They never even took a day off because they worked so hard for four months straight without a day off laying lights. So much of what you see in the movie was there for us (actors) to interact with. (To Jennifer) I know you’ve done movies that have a lot of CG elements but I think the more you can create real elements around the actor, the better I think the performance becomes because you have something against which to react.

Q: Can you talk about the action stunts in the film?

Lawrence: (laughs) I’m definitely not the most athletic of the two of us.

Pratt: She can get a straw stuck in her nose.

Lawrence: I can’t even drink a cup of water…

Pratt: … without nearly killing herself. Another inch further and she would have been lobotomized. But we had a great stunt crew and they were working hard and both of us had to do a lot of painful hours in harnesses and a lot of wirework.

Lawrence: He did most of it though.

Q: What was your favorite thing at the craft services table?

Lawrence: You love that Emergen-C.

Pratt: Yeah, I’m down with Emergen-C.

Lawrence: Then you got into mine, which is coffee with that garbage creamer.

Pratt: Ohhh, I love garbage coffee creamer. I’m a real cowboy. I drink my coffee black but she put in some straight up junk made out of melted milk cartons or something or DuPont paint thinner but fudge is it good.

Lawrence: It’s straight from Wal-Mart and it’s my favorite. I love it.

Pratt: She’s Dior on the outside, Cracker Barrel on the inside. (She laughs).

Lawrence: That’s a huge compliment. I’m really flattered. I can’t wait for my parents to read this. They’ll be so proud.

Q: What does each of you bring to the set that the other appreciates?

Lawrence: Chris brings a good energy and a good mood. He’s a spirit-lifter for everyone. He’s the hardest-working person on set and this includes the entire crew, and we had a very hard-working crew.

Pratt: Jen makes me laugh almost like no one else in my life. She cracks me up so hard all day every day. She’s really funny.

Pratt: No, I’m totally laughing with you, not AT you. She’s very funny and extraordinarily tough and I love that. I think she’s really tough.