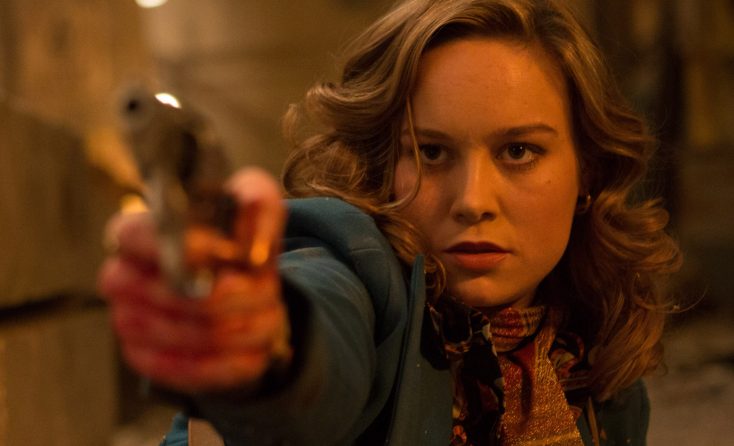 HOLLYWOOD—Brie Larson won an Oscar in 2016 for her performance as a woman trapped in a room by a dangerous man. She now plays another character in a somewhat larger room, caught in a shootout with a several bad men in the comedy thriller “Free Fire.”

A throwback to ’70s crime capers, “Free Fire” offered the actress a chance to test her endurance and physical ability (even more so than her recent “Kong: Skull Island” role), and weigh in, artistically, on the futility of violence. The role of Justine, a mysterious American businesswoman, required Larson to learn to fire guns, something that the actress says she did with much apprehension as she abhors them. Nevertheless, her character holds her own against handful of bad guys, who each have it in for each other after a black-market weapons deal between gun runners and an agent for the IRA terrorist group goes south. Most of the action in “Free Fire” takes place inside a Boston dockside warehouse (though a warehouse in Brighton, England was actually used). Director Ben Wheatley, whose previous films include “Kill List” and the Tom Hiddleston starrer “High-Rise,” decided to embrace his passion for action cinema with “Free Fire,” inspired by the films of Sam Peckinpah and John Cassavetes. Larson stars alongside Cillian Murphy (“Batman Begins”), Armie Hammer (“The Lone Ranger”), Sharlto Copley (“District 9”), Sam Riley (“Pride and Prejudice and Zombies”), Babou Ceesay (“Eye in the Sky”), Jack Reynor (“Sing Street”) and Michael Smiley (“Kill List”) in this action-packed 85-minute-long shootout.

Wrapped in a fake fur coat to counter the meat locker-like temperature of a hotel meeting room, Larson spoke about her first big action role, working alongside her co-stars, protecting her hearing from the noise generated by thousands of rounds of ammunition fired and prepping for her upcoming superhero role as Captain Marvel.

Q: Like “Room,” you are confined to one particular location for most of the film. Did you know from the outset that it was all set in one location and that it would be a lot of dialogue between you and the other actors?

Larson: Yeah, I did. The thing that was the hardest to fully understand on the page was the logistics of where we were and where we’d be running to and where everyone was. That was kind of the hardest part. But after talking with Ben (Wheatley, the director) and seeing this little diagram that he had made, then it made more sense and I was able to wrap my brain around the script a little bit better. When you’re just reading it on a page it’s very confusing. There’s something great about the intimacy of just being in one place. A lot of time is wasted on a set when you’re moving to a new location and grappling with a new space, and this was home. It also meant that we could have a clubhouse there. We had a ping pong table and a dart board and listened to music, and so it was very homey there.

Q: How did it feel to hold the guns and feel them firing?

Q: Is it something you could tough it out for the craft of acting?

Larson: Oh of course. It was a lot of things. That’s part of the job. Part of it is putting yourself in uncomfortable situations and I don’t think that my character is supposed to be particularly good at holding a gun. I don’t think I realized how uncomfortable I was with it until I started shooting and realized—shooting the film, not shooting a gun—that it’s a piece of equipment that I feel odd holding in my hand. I’ve never experienced that before, touching something and being like, “I don’t feel like I should have this.” It feels like I shouldn’t be near it, which is an interesting, new experience.

Q: Just to follow up on that, the noise of it, because a lot of effects in this are practical, both the pyrotechnics and gunfire. I would imagine that it was pretty darn loud in the warehouse. Did you have to use a lot of cotton in your ears?

Larson: Yeah, I went through a lot of ear plugs. We had some that were kind of like wax and the bottom of my bag was just completely covered in wax from putting one in, because sometimes you’d be off camera and then on camera. You’d be off camera when a gun shot happens, and so you have the ear plugs in, and then you have to run across the screen and you can’t see them so we were constantly putting them in, taking them out, having one in, having the other in, so there were just ear plugs everywhere. All over the floor, all over my bag, all in my pockets, everywhere.

Q: You mentioned hanging out in the “clubhouse” with your cast mates and playing darts and ping pong with them. Who was most intense and hardcore about their game and where would you rank your game with both of those?

Larson: Oh my gosh. These are questions that are going to haunt me, because we are all on the email chain and someone’s going to read that I said the wrong name and they’ll be like, “I was the best one.” I feel like, from my memory, Cillian (Murphy) and Jack (Reynor) were the best at ping pong, but I am so scared to say that, because I’m pretty sure I’m going to get a cranky email from someone. We’re all pretty competitive. I don’t have a ton of experience with ping pong or darts, so luckily, I just would be like, “I’m out.” But I liked darts a lot. It was fun.

Q: How was it crawling around in this dusty, dirty warehouse in your clothes for the six-week shoot?

Larson: You work a long day and you’re just like, “Oh, I feel gross and I just need to take a shower.” This was a whole new level of just stench. It was the same clothes every day. We shot in order, so we had just one pair of clothes every single day that’s slowly getting blown up with more fake blood and more fake dirt. One of my favorite memories is just Ben saying, “All right, everybody get in positions,” and everybody went to their part of the warehouse and then you just watched all of us start rolling around on the ground getting covered in dirt to match everything else that we had done. It’s just such a weird thing to see a group of 10 people all rolling around in dirt, doing dirt angels on the ground to try and get ready to shoot.

Q: Is the utter irrational, over-the-top violence of this film a metaphor for what’s going on in the world right now?

Larson: You tell me. It’s up to you, not me. I had my reasons for wanting to explore this as just something that’s part of culture and something that’s part of the industry that I’m in. It’s important, one thing on the side of being a woman, it’s been really important to me to say, “Guess what? We’re lots of different ways,” and I’m going to do my best to show all the different sides that I can portray, and I hope that other women pick up where I’m leaving off, because I can’t do it all. It’s the same thing with genre and the way that we are objectively looking at things. Being part of films that say, “It doesn’t really look the way that maybe we’ve done it before.” That’s how we continue to improve, and that’s how our industry continues to improve.

Q: You keep adding new levels of physicality to your roles. With this and “Kong: Skull Island,” and now you’ve got “Captain Marvel” ahead, are you preparing for the physical element of that role? Are you thinking about what you’re going to need to do to up your physical acting game for that?

Larson: No. Anything that’s the physical side of it, from my past experience, you hire specialists to be able to help you understand that and quantify it and pace you out and figure it all out. That’s part of the fun of making a movie is that there’s a person who does the focus pulling, and they are specialists at understanding depth, and they do something that I don’t understand and I do something that they don’t understand. My main focus is just more on the human side of it. The costumes, all the stuff that’s on the surface, there are people that you should talk to that are really, really amazing and interesting, and they’re the ones in charge of that part. I’m just in charge of what’s going on in your head.

Q: What’s been fun in the research for “Captain Marvel?” Figuring out her human side? She’s got a pretty rich mythology in the comics.

Larson: It’s always for me about the complexity, and the thing that I love about her is that there’s these actual two sides of her. There are these two things that are at war with each other, and I feel like that’s what I love about being a person, is that we’re constantly trying to balance between these two sides of ourselves, or maybe many sides of ourselves. I think it’s such an amazing opportunity to be able to put that metaphor on the outside, and make that part of what her conflict is. But we’ll see what the movie is.