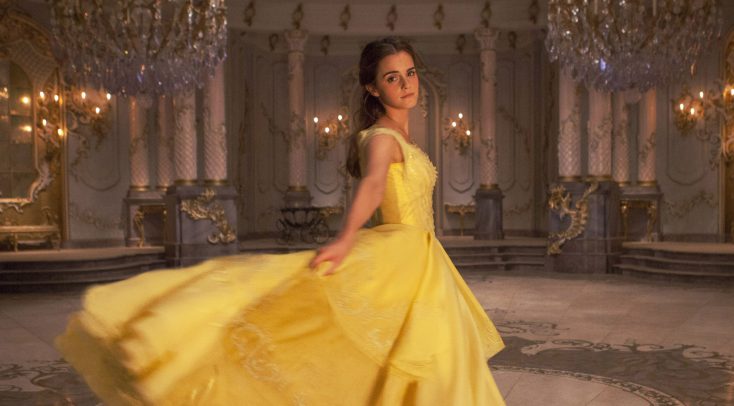 HOLLYWOOD—An all-new live-action version of Disney’s “Beauty and the Beast” musical is set to arrive in theaters. Featuring an all-star cast that includes Emma Watson (the “Harry Potter” films), Dan Stevens (“Downton Abbey”), Luke Evans (“The Hobbit: The Desolation of Smaug”), the music-filled film contains all the memorable classic tunes from the 1991 animated feature as well as a few new numbers.

Watson plays Belle, a bookish beauty bored by the provincial life in her French country town, where she is pursued by the egomaniac Gaston (Evans). When her father, a music box maker, is kidnapped by a Beast (Stevens in makeup and CG effects) that lives in a secluded castle, Belle goes to his rescue and offers herself as a prisoner instead. Slowly the pair captor and prisoner begin to realize they have more in common than they have differences. Meanwhile, when Belle’s father returns back to the village, it provides Gaston with just the opportunity he wanted to rescue Belle and destroy the Beast.

The film, directed by Bill Condon (“Dreamgirls”), and with new (and familiar) songs by Alan Menken, was designed to satisfy fans of the original as well as draw in a whole new generation of “Beauty and the Beast” fans.

During a recent press conference, the filmmaker, the composer as well as several members of the cast spoke about being part of this live action remake.

Q; The animated movie is, for so many people, their favorite film of all time. When you approached adapting it for a live action, sort of what was the process for you?

Condon: Get over the terror first, and then you just start with that basic idea. You’re going to take it into a new medium which is live-action. They’re going to be actors. Emma’s going to be playing a character on real locations who has to fall in love with the Beast. All the behavior in an animated film is sort of a little more exaggerated, so it has to come into reality, and once you start to investigate that, you realize there are questions you may have never asked before that you want to know about, such as how did Belle and Maurice (her father) wind up in this village where they’re outsiders, and that leads to new songs and suddenly you’re creating something new.

Menken: When Bill came aboard, we had meetings about what we would add, and one of the things we talked about, the music box moment and Maurice, getting into the backstory of how Maurice and Belle came to the town, and the backstory for the Beast, and how he became such a cold and callous young man. We also tried to root ourselves much more in the time and place, 18th Century France, and that really helped immensely.

Q; Emma, you’ve become a role model to so many young girls and I know that when you were growing up, Belle was someone you sort of looked up to. When you began to make the character your own, what were the sort of the things that you thought about in modernizing Belle?

Watson: It’s really remarkable to play someone that I’m almost sure had an influence on the woman that I have become. The first time I saw Paige O’Hara sing “Belle” (in the 1991 feature), I just immediately (connected) with her. I was so young I didn’t even know what I was tapping into but there was something about that spirit, there was something about that energy that I just knew she was my champion.

When I knew I was taking on this role, I wanted to make sure that I was championing that same spirit, those same values, that same young woman that made me a part of who I am today. Every time we would address a new scene that Bill or Steve or Evan had put together, I just always had the original DNA of that woman in mind, and I had my fists up, I was ready to fight because she was so crucial for me. It was just taking what was already there and just expanding it.

I love that in our version Belle is not only kind of awkward and doesn’t fit in, and you see her reading, and you see her not really a part of the community. In our film, she’s actually an activist within her own community. She’s teaching other young girls who are part of the village to read, and moments like that where you could see her expanding beyond just her own little world and trying to kind of grow it, I loved that, and it was amazing to do.

Q: Dan, in bringing the Beast to life, one of the probably the biggest challenges would be creation of him, because he’s such a huge player, the physicality has to be so intense and large and specific. Did you approach playing him any differently than any other character you’ve played?

Stevens: It was a very physical engagement. Just to support that muscle suit on stilts was a challenge that I’d never really encountered before. I’ve definitely been taking a more physical approach to my roles in the last few years and just training myself in different ways. With the backstory, we decided that the prince before he was the Beast was a dancer. He loved to dance, and so I trained myself like a dancer and learned, three quite different dances for this movie and worked very closely with the choreographer, just in terms of his general deportment, both for the prince and the Beast, and there was a lot of dancing on stilts.

Getting to know Emma on the dance floor was probably a great way to get to know your costar, and I’m going to try and do with every movie I do now, whether there’s a waltz in the movie or not. The dancing is actually telling a very crucial part of the story, so it was lots of physicality.

Q: When you have the title “Beauty and the Beast,” there is someone trying to keep those two apart and that is Gaston. Luke, what did you sort of clue into in Gaston’s past or in building the character that made him more than a villain to you?

Evans: I just think a villain shouldn’t start out as the bad guy. A villain should end up being the bad guy, and I think with Gaston, outwardly, to a lot of people in that village, he is the hero. He’s a bit of a stud. He’s got the hair. He’s got the looks. He’s always impeccably dressed. And his singing voice isn’t that bad.

He’s got a great pal who makes everybody support him and sing about him. I wanted the audience to, in a way, like him a little bit first, so that’s when the cracks start to appear, which they do very subtly, even from the door slam, there’s something inside of him saying, “this is not what she’s supposed to be doing.” And although he keeps believing that Belle will change her mind, that’s where the cracks appear. Slowly, the jealousy takes over. Gaston, as opposed to other Disney villains, has no book of spells and no magic powers. He’s a human being, and he uses his status within that village to rouse a crowd and he does it all from just being himself, which is quite terrifying, in a way, so I played on that. I played on the humanity of the character as much as he is larger than life. He was a war hero, of sorts. That’s why his murals are all over the pub that he drinks in. There is this animalistic soldier when he finally fights the Beast on the rooftops. You see this man out for blood, and it’s a scary moment to see the arc of somebody who was the loveable buffoon of the village to become this almost monster.

Q: Josh, you’ve done Broadway so you come into this being adept at singing and doing comedy. In this film, you get to ride a horse. How was the horseback riding for you?

Gad: I learned a couple of great lessons on this movie, one of which is that Jews don’t belong on horses, specifically, overweight Jews. My horse was an anti-Semite. They told me it trained for this movie but I believe they found it in the wilds of England. Luke and I our first entrance into the village, and (when Condon called) “action,” all our horses need to do is walk side by side. Luke’s horse does it. Mine is a cold-blooded killer, and he proceeded to moonwalk, walk backwards. Then, he ran through multiple extras in the village—I didn’t even know it was possible—but ran through these like pillars around, up and back again. I heard “cut” and I heard laughing, and the laughter was coming from the horse’s trainer, and he came up to me and he goes, “I’m so sorry. I’ve never seen this happen before.” It was so sad and it made me feel so awful about myself.

Ironically, my horse’s name was Buddy. That is a true story. He’s nobody’s buddy. I’m begging Disney to press charges against him, and I’ve told my agents to never send me another script with a horse in it again. Unless it’s on wheels. In the sequel to Beauty and the Beast I drive a DeLorean.

Q; Bill, there’s been a lot of talk about the sexuality of LeFou this week. How do you feel about that?

Condon: I talked before about how we translate this into a live action; that means filling out the characters. It’s also a translation to 2017. What is this movie about? What has this story always been about? For 300 years it’s about looking closer, going deeper, accepting people for who they really are, and in a very Disney way, we are including everybody. This movie is for everybody, and on the screen, you’ll see everybody, and that was important to me, (and) I think to all of us.

Q: Emma, what does Belle symbolize to you?

Watson: Belle is this ultimate kind of symbol of the fact that books can be rebellious, they can be incredibly empowering, liberating. They are a means to travel. You can travel to places in the world that you would never be able to, under other circumstances. I was just really proud to play a character that has a certain earnestness about her, honestly. She’s not in any way kind of ashamed of that, and it’s not easy being an outsider and it’s not easy to pick battles. It’s not easy to try to move and work against a system, to work against the grain, to move against the status quo. But she does so with kind of this amazing fearlessness, with the support of her father. It’s something that she weathers on her own, really, at the end of the day, and so I’m very grateful that this character exists and that I get to bring her to life. It’s fantastic.