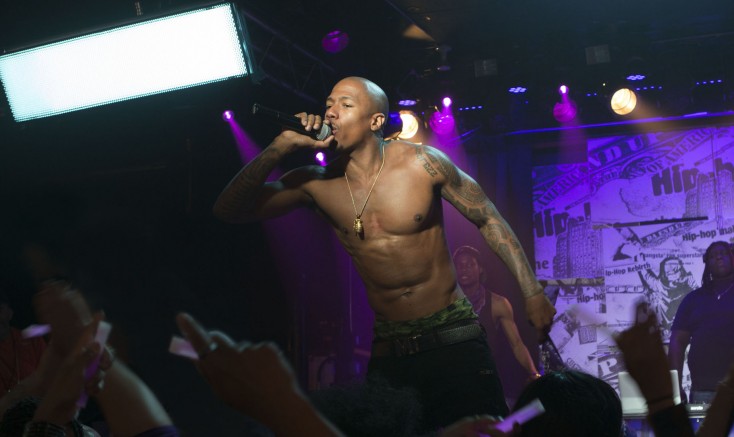 HOLLYWOOD—Though he primarily is known as a rapper and host of TV’s “America’s Got Talent,” Nick Cannon also is an actor. He gets to show off his chops in Spike Lee’s musical-political-social satire “Chi-Raq.”

In it, he plays a fearsome Chicago gangbanger, who is nearly killed one night while romancing his girlfriend. As the leader of the Spartans gang, he knows immediately who is responsible for firebombing his South Side row house—members of the rival gang, the Trojans, and he vows revenge.

The script by Lee and Kevin Willmott is based on Aristophanes’ Lysistrata, a classical Greek play in which women withhold physical affection from their men as punishment for fighting in the Peloponnesian War. Similarly, in “Chi-Raq” (a term that combines “Chicago” and “Iraq,” because both have endured high rates of violent death over the past decade), the fed-up women of the largely African-American Englewood neighborhood ban together to withhold sex from their men until they agree to stop killing each other as well as innocent bystanders, including children.

Controversial yet astoundingly timely—a recent screening was held on the same day President Obama vowed to curb gun violence with a series of executive actions—Cannon explained that “Chi-Raq” is meant to raise awareness of increasing gun violence, which has been particularly endemic to poor, urban areas like the South Side of Chicago.

Cannon said he appreciated that Lee, a two-time Oscar nominee, cast him in the title role.

“Obviously, I’ve been a writer and musician since I was a kid, but to be brought in for my acting ability as well, it’s like a dream role for me,” he told an audience of film industry insiders.

He went on to say that he concurred with Lee’s stop-the-violence message, and supports the way he does it through music and humor. One of the slogans the women use in the film is “no peace, no piece.”

“Spike (Lee) is an amazing conductor of noise in a town where it’s tough to get people’s attention,” he said, adding, “but he delivers it in an artistic way. You don’t have to actually agree with him, but the fact that we’re having this discussion, that’s what art is all about.”

While there is no disputing the anti-gun message of the film, as well as swipes at oblivious government leaders and corrupt law enforcement, Cannon said it is meant to spur debate and discussion about trying to curb rising gun violence.

“Hopefully, the fact that we’re even having a conversation about (the rising rate of black homicides) is the most important part,” he said.

Cannon sings the tracks “Pray 4 My City,” and “My City” in the film. Other artists on the “Chi-Raq” soundtrack include R. Kelly, featuring Tink (“Put the Guns Down.”), Mali Music, featuring Jhene Aiko (“Contradiction”) and Oscar winner Hudson (“I Run”), who plays the mother of a slain 8-year-old girl, in one of the film’s most emotional subplots. Hudson herself experienced personal tragedy when an estranged family member in Chicago murdered her mother, brother and 7-year-old nephew in 2008.

The violence in Chicago’s poorer neighborhoods has become so prevalent that young rappers there have created a form of rap called “drill” music, which is incorporated into the film’s soundtrack.

“It’s dangerous and exciting but at the end of the day, I’ll say this is the voice of this community crying out,” said Cannon, defending the explosive lyrics. “Young people have taken hip hop but there’s some violence attached to it. It’s really sad when you see these young men and women who are crying out through music and trying to find some real stability in their lives because there is a lack of guidance. They start to focus on the wrong things. There are terms being used like ‘savage.’ That’s like a compliment now in the South Side of Chicago.”

In composing “Pray 4 My City,” Cannon drew inspiration from some of the young Chicago rappers.

“The fact is they love Chicago, they love their city and the people in it and how they’re trying to embrace the community,” he said. “They’re saying, ‘we need help, we need focus, we need guidance,’ but we did it in a way where in the opening of the film you can see how powerful and invested they are. It came from real voices in the community and you can hear it in the way it is orchestrated.”

The film’s title and its racial and social themes have come under some criticism since it was released in early December. Lee refused a request by Chicago’s City Council and some locals to change the film’s title, with its negative war-zone connotation, even after he was threatened with losing tax credits for making the film on location there. Yet “Chi-Raq” has been a darling of critics. It received a Certified Fresh designation of 81 percent on the aggregate review site rottentomatoes.com.

“There has been so many debates about it but the fact that you can take something negative and turn it into a positive is a reward in itself,” said Cannon.