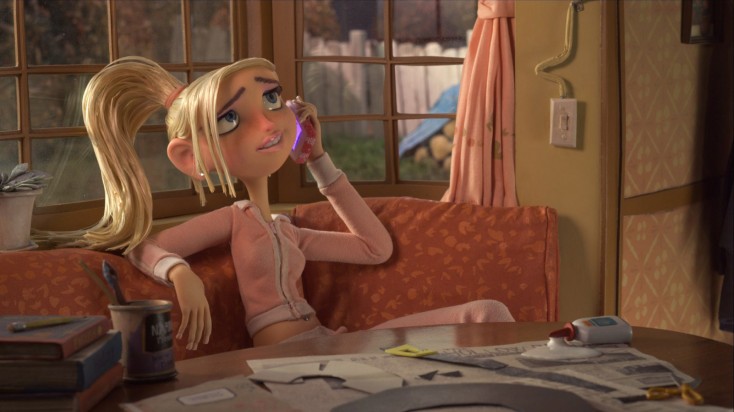 HOLLYWOOD—Actress Anna Kendrick, who voices 11-year-old Norman’s self-absorbed big sister Courtney in the animated zombie adventure “ParaNorman,” was shown a picture of her blond, beautiful but very big-bottomed character when she was hired for the role. She says it was “actually really helpful to know that I had all that physical stuff to work with, because she’s got a lot of physical stuff happening!”

Norman can speak with spirits of the dead in the movie, although no one initially believes him. Aided by Courtney and two schoolmates, he tries to keep a 300-year-old corpse-raising curse from destroying their small town.

Describing the Valley-girl vapid Courtney as an “awful, volatile teenage force of nature, ” Kendrick notes that the pink track suit-wearing cheerleader is shaped like a triangle, while a huge shouldered lunkhead she desires is shaped like an upside-down triangle. “So they kind of fit together,” she says. “That’s really cute.”

Courtney is Kendrick’s first character-voice role. “I’d always wanted to do one, but I wasn’t really sure how one went about asking to be in an animated film. So I felt really lucky that this kind of special one fell right in my lap, and I just jumped at it,” she says. “I just love kids banding together to save the day, so I was really excited to go on the ride.”

Oscar-nominated for her supporting role as a rigidly businesslike workaholic in 2009’s “Up in the Air,” Kendrick says the most difficult part of doing voiceover work  was “just allowing myself to make a fool of myself. But that’s true of any job, I guess.” She says she kept looking at a camera that was set up to record her for the animators to use in bringing Courtney to life, and hoped the potentially embarrassing footage would not end up on the internet.

What helped her performance was the presence of Casey Affleck, who voices Courtney’s oblivious crush, in the studio recording dialog the same day she started. “So we both got to be nervous and (were) learning together,” Kendrick says. “By the end of the day, we were pretty competitive in just trying to make bigger fools of ourselves. So that was actually great.”

Although she acknowledges that “it feels nice” to be nominated for acting awards, she was asked to do a lot of roles similar to her “Up in the Air” character after that movie. “So it’s a challenge to find someone who’s willing to let you try something different, which I thought was actually the interesting thing about this,” she notes. “ParaNorman” co-director Sam Fell and co-director/writer Chris Butler “saw me as an obnoxious 16-year-old in a pink sweatsuit. I was like, ‘great, these are creative people.'”

Clueless big-sister Courtney is the emotional opposite of the more grounded younger sister that Kendrick played in 2010’s “Scott Pilgrim vs. The World.” “Stacey Pilgrim was something I could relate to much more,” Kendrick explains, “because I have an older brother, and I felt as though I was much more mature and responsible than he was. So I would give him advice. But I would say Courtney does not have Norman’s best interests at heart.”

“ParaNorman” includes scenes in which Norman and a friend are bullied. “I think everybody has been bullied to an extent, and we all got our fair share of that kind of thing,” Kendrick says. “Middle school was worse than high school for me, but at the same time I don’t really want to say that I was bullied, because I know that some kids are going through it in a way that I can’t even imagine. So did I have awful days where I thought I would never go back to school? Yes. But I wouldn’t consider myself a victim of bullying in the way that people mean it right now.” She adds, “I definitely know that kids can be mean, but I was lucky enough to kind of get through it all relatively unscathed.”

She would like to think that “ParaNorman” can have a positive effect in that area, and says it’s great that the movie continues a tradition of stories in which “the underdog who no one believes in is the one that everybody has to turn to for help.”

After filming wrapped on “ParaNorman,” Kendrick says she got to walk around in the miniature sets used for the stop-motion feature, in which the movable figures of the characters are under a foot tall. “So I got to take pictures like I was the 50-foot woman,” she laughs. “It was really beautiful and magical to see, like the meadow set was just amazing…and I got to touch everything. Everybody else went when they were still filming, so they were jealous that I got to touch all the stuff.”

When she saw the completed film later, she remembers that “it felt like that sensation you get when you’re watching a movie and you’re like, ‘I know that restaurant, I’ve been to that restaurant'”—except that the places she recognized were miniature scale-model business that were Courtney’s size.

Kendrick, who received a Featured Actress in a Musical Tony Award nomination at age 12 for her role in 1998’s “High Society” and who has appeared in Stephen Sondheim’s “A Little Night Music,” will be seen later this year in the musical-comedy “Pitch Perfect.” “I’m singing a lot in it. I’m singing all over that movie,” she says. “A bunch of it I insisted that I get to do live, because I just feel like audiences can tell when it’s not. Anytime I’m singing on my own, it’s pretty much live.”

Her other upcoming films include the police drama “End of Watch” and the comedies  “Get a Job” and “Drinking Buddies.”