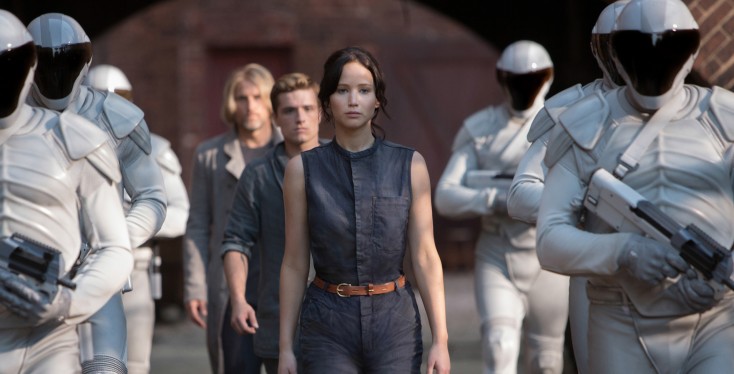 HOLLYWOOD—Jennifer Lawrence gets emotional as she recalls a “Hunger Games” fan she met on the set while shooting the movie’s sequel “Catching Fire.”

“There was a girl who was an extra and she was covered in scars—she’d been burned—and I remember her coming up to me and saying she had been self-conscious of her appearance while she was in school. But after she read ‘The Hunger Games,’ she felt proud of her scars,” says the Oscar-winning actress, during a press conference to promote the latest installment of the fantasy adventure franchise in which she plays heroine and reluctant martyr Katniss Everdeen.

“I remember I was crying when I called my mom and told her about this girl,” she continues, her voice cracking. “I still can’t talk about this without tearing up. I told my mom, ‘I get it.’ I remember reading that third book, when (Katniss) goes to the hospital. Sometimes (acting) seems so pointless because it seems to be all about hair, makeup and clothes, and then you see the lives you can touch without meaning to.”

The Kentucky-born actress says it is that type of connection with her fans that makes her proud to be part of the popular franchise. (The first movie has raked in more than $408 million worldwide since its March 2012 release.) That, and the fact that she gets to play a character she personally admires and is happy to be associated with.

“The Hunger Games: Catching Fire” picks up with Katniss at home after winning the Hunger Games competition with fellow tribute Peeta Mellark (Josh Hutcherson, reprising his role). Their reunion with friends and family is short-lived, as the duo is required to go on a Victor’s Tour of the districts. Katniss senses a rebellion brewing, but the Capitol is still very much in control as President Snow (Donald Sutherland) prepares for the next competition—which will pit former winners against each other.

The fantasy adventure is based on the second novel in the series by Suzanne Collins, adapted for the screen by Simon Beaufoy and Michael deBruyn and directed by Francis Lawrence (no relation to Jennifer).

Sporting a short blond hairdo, Lawrence recalls how she was inspired when she first read the books a few years ago.

“I knew it was something that was actually very important,” she says with enthusiasm. “I think it’s a wonderful message to show just how powerful one voice can be. It’s very easy as a society for us to just follow the feet in front of us as history does kind of repeat itself. I think that it’s an important message for our younger generation to see how important they are in shaping our society and our future.”

The actress says there are lessons in the “Hunger Games” books and the movie adaptations that young people can apply to real life.

“We have this society where people feel entitled to certain things. And I think that we have been completely desensitized in our shock factor, and the media continues to feed you what you want,” she says. “This is an example of what happens when you keep allowing that to happen, when you keep feeling entitled to things that you’re simply not.”

She points out that a turn of events at the end of the first film reveals there is an alternate path.

“The idea of ‘we don’t need to play in this game’ is a wonderful example for young adults, that you don’t have to follow the feet in front of you, even though you can seem like the only one, even just one voice standing up for something that’s wrong can keep us from going into a totalitarian government.”

Yet when asked who she thinks could serve as a symbol of revolutionary change in our present society, Lawrence decides not to get too political and jokingly responds, “Ryan Seacrest.” (Co-star Woody Harrelson, who plays Katniss and Peeta’s mentor Haymitch Abernathy, suggests talk show host Bill Maher for that role.)

Further evidence of her natural goofiness is evident when she is asked to describe the toughest stunt she performed in the sequel.

“The hardest stunt to do was the spinning cornucopia, which was pretty hard. We had a real spinning cornucopia that was going about 30 miles per hour, and Jena (Malone, who plays emotionally manipulative Johanna Mason) and I were both having our morning sickness.”

Realizing her verbal faux pas, Lawrence corrects herself by saying she meant “motion sickness,” adding, “My publicist is going to say, ‘And that’s what I’m going to be dealing with for the next 24 hours.’”

What does she like about reprising her role as Katniss?

“You get to play a character who’s obviously the same character, but is changing and growing, and that’s nice,” she says.

Co-star Elizabeth Banks reprises her role as glamorous Effie Trinket, whose job is to guide the two champions on their tour. She says, “Jennifer is an amazing actress who gets amazing roles and I wish she gets them always and forever for the rest of her life. I’ve been doing this a little longer and I know there are a lot of girlfriend roles and wives and other supporting roles that are less interesting than Katniss, so I hope she gets to play Katniss-level roles forever and ever.”

Though only 23, Lawrence has become one of the most in-demand actresses in Hollywood. She is pleased that an upside to her fame is that she can use her name to do good in the world.

“There are so many wonderful changes that can come from this, like when you have a voice, but you need to say the right things,” she says. “It’s so easy for us to raise money for charity, for example. It takes only 10 minutes for me to sign a bunch of posters that can raise thousands of dollars for charity.”

Since winning her Oscar earlier this year for her dramatic performance in “Silver Linings Playbook,” Lawrence hasn’t changed much. Right after the ceremony, she went right back to work on “Catching Fire,” which was in production.

“I brought (the Oscar) to work and put in on Video Village and I was like, ‘Things are going to be very different from now on,’’’ she jokes.

Continuing, she says, “No. When I saw everybody the next day and everybody was like, ‘Cool.’ I was like, ‘Nothing? OK.’ Actually, it made me a target. Every time I’d mess up my lines, Woody would say, ‘You’d better give that Oscar back.’ I actually wished that everybody in this cast didn’t know about it. It would have made my life a lot easier.”

Lawrence says she was honored to win the Academy Award and is still slightly confused by receiving the statuette.

“I’m still pinching myself,” she says. “I still haven’t fully digested it, and maybe I shouldn’t.”

The actress is set to reprise Katniss in two more “Hunger Games” installments. The final book in the trilogy is being divided into two parts (“The Hunger Games: Mockingjay, Part 1” and “The Hunger Games: Mockingjay, Part 2”), which will be released over the next two years. She also reunited with her “Silver Linings Playbook” director David O. Russell to star in the crime drama “American Hustle,” due out next month, in which she plays the volatile wife of a mole in the mafia.

She describes working again with Russell as “a no-brainer.”

“The script and the character are the main things,” she says. “It was like nothing I’d ever done before so I did it, instead of resting.”

Lawrence likes changing up her roles but says that she doesn’t go out of her way to find characters that are not like Katniss.

“The reason that I signed onto ‘Hunger Games’ is because we had already had ‘Harry Potter’ and ‘Twilight,’ she says. “ We were obviously surprised by the success (of ‘Hunger Games’)—how could we not be—but we did know what to expect to a certain extent. If I was going to be identified with a character for the rest of my life, that’s a hard thing to think about, but I loved this character and I’m proud of her, and I would be proud to be associated with this movie and this character for the rest of my life. For me, I like going back and doing (independent films). I started out doing indies, and I enjoy them. Sometimes when you find a really great character like Rosalyn in David’s movie, it’s better than a vacation. It’s exciting and worthwhile … as long as the catering’s good.”