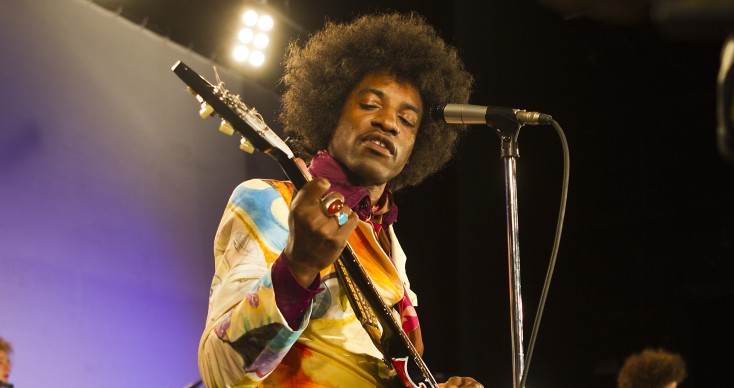 Danny Bramson at the “JIMI: ALL IS BY MY SIDE” premiere. ©Sthanlee B. Mirador.

HOLLYWOOD—In a climactic scene in the Jimi Hendrix biopic “Jimi: All Is By My Side,” the talented guitarist (played by Outkast’s Andre Benjamin), on the cusp of fame in June of 1967, opens a show at London’s Seville Theatre with a rendition of the Beatles “Sgt. Pepper’s Lonely Hearts Club Band.” Hendrix and his band performed what would become a Beatles classic just three days after the album’s release, and before an audience that included George Harrison and Paul McCartney.

Getting the Beatles song cleared for the film was up to Danny Bramson, the noted Hollywood music and film producer, who previously secured Beatles songs for Cameron Crowe for “Jerry Maguire” and convinced McCartney to write the title song for “Vanilla Sky,” which went on to earn an Oscar nomination.

For “Jimi” director John Ridley, getting Bramson onboard to serve as the film’s music producer was critical in getting the sound just right for his film, which is an account of Hendrix’s life during a brief period in the mid-60s, when he was just establishing himself as a musician in London.

“He was basically our archivist, our frontman, our agent, our intermediary, in terms of the music,” says writer-director Ridley (the Oscar-winning writer of “12 Years a Slave”) says of Bramson. “To have someone like that who could look at the script, and look at the story you want to tell and say, ‘Yeah, there is value here,’ and he could approach people like Eric Clapton and honestly say to them, ‘These guys are doing this because they care, not because can,’ that makes a difference.”

Bramson recently spoke by phone from his Los Angeles-area home about working on film, which is chock full of 60s music that was part of Hendrix’s world during that period of his rise to fame, including Chip Taylor’s “Wild Thing,” Curtis Night & The Squires’ “Future Trip,” which featured Hendrix when he performed as Jimmy James and “Hound Dog,” the Lieber & Stoller classic that Hendrix played in concert, but never officially recorded.

Unlike most biopics, which frequently span a performer’s life, “Jimi: All Is By My Side,” confines its story to 1966-67, a seminal period in which the talented backup guitarist was playing New York’s Cheetah Club before moving to London where he stormed the local music scene. While there, became involved with three very different women: posh talent scout Linda Keith, sexy groupie/girlfriend Kathy Etchingham and Ida, a sly interloper who caught the musician’s eye.

Q: For you, this is a job, you basically had one hand tied behind your back because you’re not using any of Hendrix’s original recordings and yet you have to come up with 36 songs that are appropriate for this.

Bramson: Thank you for counting.

Q: Where do you start when you’re invited onto a project like this?

Bramson: It all starts with the script. That’s the way I work with every project I’ve ever done, whether it was with (director) Cameron Crowe or with Paul Thomas Anderson (on “Magnolia”) or some of the other great directors. Reading John’s script pulled me in. I remember 50 pages in I was so captivated with that environment that he rooted that first draft in. The film takes place in that lost, and underserved year in Jimi’s life, that musically so potent and fertile environment of London that permeated and surrounded him. Obviously, when I read the script, having worked with the estate for my very first soundtrack, “Where the Buffalo Roam” with Neil Young, to the majority of Cameron’s films in granting me using Jimi’s more iconographic pieces. In this case, we were well aware of any of Jimi’s original songs would, especially for an unauthorized Hendrix-themed film, would be met with their longstanding reluctance. Thus, we never sought out any of Jimi’s hits that came once he left Heathrow (Airport in London) for Monterey Pop. That musically fertile environment of John’s story allowed me to interpret Jimi’s development, from playing second lead guitar with Curtis Knight in New York and then forming his own group, and gigging at the Café Wha? to his arrival in London. With those standard songs of Jimi’s out of the equation from the top, we chose a musical design as an interpretation of his development as a guitarist principally, and the English musical and cultural zeitgeist that informed, inspired and propelled him. So the creative challenge was absolutely staggering, underscored with the incessant personal responsibility to get it right.

Q: In securing “St. Pepper” for this, did it help that you had a previous relationship with Paul McCartney on the Cameron Crowe movies?

Bramson: When Cameron was making “Jerry Maguire,” it was when it was almost impossible to get Paul onboard for a film. We thought we were the odd Americans in a long, long line, and we presumed we’d be rejected, but we caught their attention. Paul told me much later that when he and Linda (McCartney’s first wife) were reading the script late one night and had our request in their hands, they were wondering, “What do these two Americans want? Do they want one of our hits? ‘Maybe I’m Amazed?’ ‘Yesterday?’ ‘Blackbird?’” No, what we wanted were these two obscure instrumentals from Paul’s first solo album. They had recorded it in the barn called “Singalong Junk,” and “Momma, Miss America,” and they were so curious that they gave us both songs, and that initiated our relationship and his entrustment. Then later, when we made “Vanilla Sky,” he wrote our title song.

Q: Was it easier to go back this time to ask for “Sgt. Pepper?”

Bramson: When I read John’s first draft four years ago and sat down with him the very next day, from the very beginning, I was obsessive in telling him of what I always thought was one of the great stories of the young rock era that had never been captured, bootlegged or photographed, which is Jimi only three days after first hearing Sgt. Pepper upon it’s release had the temerity and balls and talent to open with that all but unrehearsed with Mitch Mitchell and Noel Redding, in front of Paul and George and Pattie (Boyd). It’s one thing to desire it and another to pull it off. With this one, we were so fortunate. I first called Paul’s office and told him what we were doing, and thankfully he trusted me and hopefully will love (the movie) when he’s off tour and can see it.

Q: Did you work directly with Andre Benjamin, who plays Jimi Hendrix in the film? What did you think of him?

Bramson: I can’t say enough about Andre Benjamin. I’ve been so fortunate to work with some of our greatest actors and performers over the years. As an actor, I admire how he approached the film, and how he threw down and absolutely jumped in hands and feet, and became as obsessive as John and myself about it. He ranks alongside the great ones in his work ethic and passion. His sense of musicology that he brought to Jimi was just exceptional. I called up my friend Andrew Rollins, who served as guitar supervisor, to work with Andre. He was someone I felt was willing and patient, and whom Andre wouldn’t get sick of. John and I didn’t just give Andre a blanket of nine or 10 five-minute pieces where he’d have him learn every chord and lick of it. We broke down each performance that we had set for filming, where we’d give him, say, 20 seconds here, a minute and a half there, a bridge here, and Andre sat with Andrew, and on those pieces, concentrated six or seven hours a day, seven days a week over several months here in Los Angeles. Then, when we moved to Dublin, where we shot the film, I set up a rehearsal space where he and Andrew could continue to rehearse all the way through our final day of shooting. I can’t say enough of my absolute awe of his performance. All through the editing of the film, and now when I sit down and watch the film with an audience, I’m gobsmacked every time.