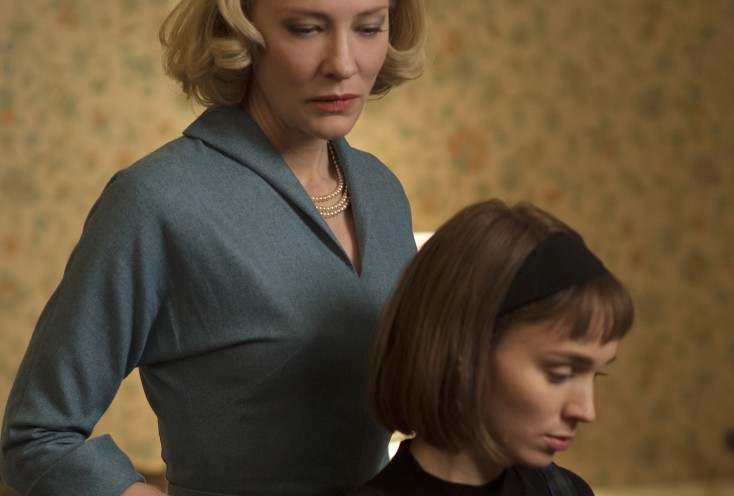 HOLLYWOOD—Carter Burwell has composed the music for more than 80 features films in his long career. The native New Yorker has penned the scores of nearly all of the films of sibling filmmakers Joel and Ethan Coen, including “Raising Arizona,” “Miller’s Crossing” and “Fargo, ” among others. The exceptions being “O Brother, Where Art Thou?” and “Inside Llewyn Davis,” which used folk and country music soundtracks produced by T-Bone Burnett.

Burwell, a soft-spoken, cerebral sort of individual, also has collaborated a few times with film auteur Todd Haynes, composing the score for his “Velvet Goldmine” and the 2011 TV miniseries adaptation of “Mildred Pierce,” for which he won an Emmy award. In making his 1950’s-set forbidden love drama “Carol,” starring Cate Blanchett and Rooney Mara as New Yorkers who fall in love, Haynes turned again to the dependable and highly in-demand Burwell to come up with a score that was both period-appropriate and timeless. Burwell’s score has been nominated for a Golden Globe award.

The 60-year-old musician, who is married to artist Christine Sciulli, spoke about composing the score, collaborating again with Haynes and how he learned to appreciate melodrama from Sidney Lumet.

Q: How do you start composing for a film?

Burwell: It’s not as hard as you might think because I have the film in front of me. So it isn’t really a blank page, which I believe would be a challenge. Even if I had a blank page, what I do is sit at the piano. If I don’t have an idea, I put something in front of me that I want to read, and then put my fingers on the keyboard and not think about it. If I hear something I like, then I’ll stop and start developing it.

The thing I think makes this job doable is that I have the film in front of me; I have visual stimuli and the story. I think about what the film needs and what can I bring to it.

Q: You’ve said that it drives you mad when you see a film that’s drenched beginning to end in music.

Burwell: (He laughs.) I like the word “drenched.” I think I’ll use it next time.

Q: As a composer, you determine where the music needs to go and when it is unnecessary. How do you decide?

Burwell: Every film is different. I don’t want to apply one formula to all filmmaking. My general feeling as a film viewer is that I prefer not to be told how to feel and I enjoy the feeling of not being sure about what’s going on. That’s one of the things that makes it fun is thinking, “I’m not sure how I’m supposed to feel about this.” I like having curiosity and exploration. But if something is there telling you how to feel and telling you what’s going on, to me that’s not enriching the experience; it’s depriving my experience of uncertainty.

I’ve also worked on films like “Mildred Pierce,” which are melodramas, where the style calls for the music to tell you what’s going on. I, honestly, try to avoid working on films like that. What happened is that (director) Sidney Lumet asked me to work on what turned out to be his film, “Before the Devil Knows You’re Dead,” and he knew I preferred not to do melodramas, so the first thing he said to me was “‘Melodrama’ is not a dirty word!” He said, “This is a melodrama, and we’re going to do a melodrama,” and he talked to me about his background in Yiddish theater. He was telling me there’s a place for melodrama, it has a role in the dramatic arts and, basically, he was going to drag me into that world, which he did.

Burwell: No, but in terms of the choosing the places where there is music, a lot of the best directors, and screenwriters too, will write and direct with an understanding of what music is going to bring. Take the Coen brothers—they commonly will have sections in their script where there is no dialogue. They know there is going to be music. They don’t know what it is. They know I’m going to put something there, and they understand that can be useful in a film. It can tell you things that two pages of dialogue couldn’t.

“Carol” is that type of film where, if you saw it without music, you would know exactly where the music goes. I don’t think there are any big surprises. Todd (Haynes) made the movie in a way that these characters aren’t able to a say a lot about how they feel or what they’re after. They may not even know themselves what they’re after. Their culture hasn’t given them the vocabulary to express it, so the music is going to do it. So the question of where to put the music in this film was fairly easy, although I wouldn’t have necessarily played it as loud as sometimes Todd does—the last scene being the most striking.

Q: Is the same music used at the end as in the beginning of the film?

Burwell: Yes, it’s the same theme. The last scene of the movie there’s no dialogue andthe drama comes from the way it’s shot and the score, and that’s the end of the movie. So the music had to be bold. There was no other way to do it.

My tendency is to be a little more reticent about the film score, but with Todd, you can’t do that. He really feels strongly about what music can say and the role of music in human culture and the kinds of things it can express. So, it’s great. He leaves room for it and that last scene in “Carol” is a perfect example.

In “Carol,” it’s a very specific time and place where it takes place. It’s the early 1950s in New York City. It’s been shot to be quite specific in dress and costume, etc. The score, as opposed to the songs, is more inside these people and has to do with them. While I don’t want the music to sound inappropriate to what you’re seeing, there’s a certain amount of the movie that is shot in a subjective way. There’s a time when Carol (Blanchett) drives Therese (Mara) to her home for the first time. It’s their quiet time together for the first time. You see it all from Therese’s point of view. She’s focused on the glove that (Carol) is wearing. It’s all extremely subjective to the point where it’s almost surreal the way that it’s been shot, and the music does the same thing. The music is not of that period; it could never have existed in that period, the way it’s produced and recorded, and yet I gave myself latitude because we’re not in a particular time and place in that scene, we’re in her head.

Q: There is a song playing on the radio, and your score is layered over it in that scene. The sounds don’t conflict but complements each other. How did you do that?

Burwell: We decided what song it would be and then I wrote in the key and worked with it, so that was the idea, was that they would be able to work together. I love that idea. It mirrors the way the scene’s been shot where there is an exterior world, and the song on the radio is in that exterior world, but we’re experiencing it all through the gaze of a young woman who’s infatuated. The two things layer together, so you can’t separate one from the other, in a way.

Q: Is there a theme or certain instruments for each of the main characters?

Burwell: Not so much. In the book (“The Price of Salt,” by Patricia Highsmith), you see it all from Therese’s point of view. Carol is kind of an unknown, more of a cipher. Even in the film, at the beginning, Carol is the cool, object of desire, but who is she? She’s almost seems intentionally mysterious. So we don’t spend that much time in Carol’s head. Eventually, toward the end of the movie, we do but for the first half of the movie, we’re almost entirely in Therese’s head. So most of the thematic material had more to do with Therese. But it has to work for both of them. By the time they’re on the road together, everything has to work for both of them. The stuff I wrote for the beginning of the film has to capable of developing into a theme for both of them.

Q: You’re working on the score for the Coens’ next film, “Hail, Caesar!”

Burwell: Yeah, we just finished the last recording on that about a week ago.

Q: How different or similar was that process to your work on “Carol?”

Burwell: (joking) It’s actually the same story as “Carol,” but retold as a Coen brothers movie. (He laughs.) No, it’s very different. It takes place in Hollywood, and we’re doing Hollywood music. It’s from the same period as “Carol.” I have to write to different genres. I wrote an Esther Williams-type water ballet. There’s a Roman swords-and-sandals epic and a Western. I wrote all these things for it. It was a lot of fun. The challenge was the movie has in all these different musical forms, so how does it add up to something, or does it add up? We were really unsure going in. Should it be one melody played in all these different ways or different melodies? So we picked a middle ground where there are all these elements present in lots of these different forms. I haven’t seen the finished film. They’re just finishing the mix now. I won’t know until I see it whether it adds up to a film score until I see it.

Q: You also wrote the film score for Charlie Kaufman’s stop-motion animated feature “Anomalisa.” What was your challenge in that one?

Burwell: The main challenge was it’s stop-motion animation, so the things you’re seeing on screen are not real people. The story and action get extremely intimately, and more intimate socially, sexually than most films that involves humans.

There are these objects onscreen, and the animators’ job was to bring those characters to life, and they did an amazing job. I considered my challenge to help with that to play the characters’ feelings and longings and vulnerabilities in a sincere way so the people in the audience will want to open their hearts to them. The music’s job was to help with that process.