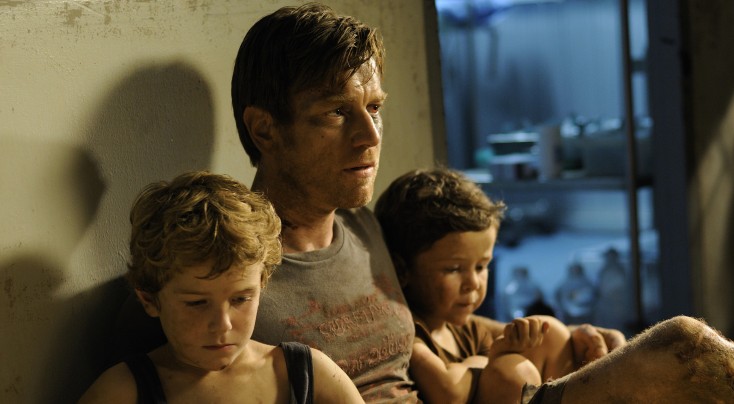 HOLLYWOOD—Ewan McGregor is the father of four children, ranging in age from 2 to 16, but surprisingly the Scottish actor has played a parent onscreen only once or twice.

In “The Impossible,” he gets a chance to play a father who puts his love and dedication to his family ahead of his own safety.

Based on the true story of a family who experienced the tsunami that struck Thailand in 2004, “The Impossible” is a story of survival, courage, determination, faith and love of family.

McGregor plays Henry, who is on holiday in Thailand with his wife and three young sons when their idyllic world is upended by a wall of water that washes over their seaside resort, separating him from wife and oldest son. In the aftermath of the deadly natural disaster, he goes in search of his missing relatives, putting his younger children in the care of a stranger. He co-stars with Naomi Watts and newcomer Tom Holland, who play his wife and oldest son, respectively.

Best known for his work as young Obi-Wan Kenobi in the “Star Wars” movies and his motorcycle adventure documentaries, McGregor relished the opportunity to play a father. He considered the role practically—not putting himself in the headspace of what he would do had this horrible tragedy happened to his own family. That, he says, would be unthinkable. Instead, he thought hypothetically about what a father would go through emotionally, not knowing whether his wife and so were dead or alive.

Nattily dressed in a dark, double-breasted suit, the 41-year-old actor spoke about his role in “The Impossible,” directed by Spanish filmmaker Juan Antonio Bayona, based on the true account of Maria Belon, and written for the screen by Sergio Sanchez.

Q: Why did you want to play this role?

McGregor: It’s difficult to put a finger on it. This film was an opportunity to explore being a dad for the first time. That’s something I know absolutely about because I’ve been a father for 16 years, but I’ve never played a dad. In “Nanny McPhee 2,” I had some kids, but that was a day’s shoot. I didn’t explore very much, other than running down a hill, which I did very well.  So this, for me, was an opportunity to do that, to really look at it, because that love that you have for your children is a love that you don’t experience with any other human beings in the world.

Q: So did you bring something from your own life as a father to this movie?

McGregor: No. I wouldn’t do that. I couldn’t do that. It just wouldn’t be right for me to do that. It’s difficult to analyze what you do really as an actor, but I had this family there. We created this family. I had these three brilliant boys to work with, whom I really liked, and Naomi, who I really like, and with whom I’ve worked with before, and I thought of them. This was probably the best kind of acting anyway; to be thinking about the people you’re meant to be thinking about. If I was thinking about my kids, it would first of all be just horrible to do, and there’s something wrong about that. I couldn’t use them to create work. At the same time, my experience of being a father is, of course, in all of this work. The scenes I play with the boys, the scenes I play when I’m looking for my kids, it’s all driven by my experience of being a father, without me kind of making myself mentally think about them.

Q: What did you learn from playing this role?

McGregor: It would be really nice to give you a nice quote about how this film changed my life but I can’t because you act from two things: Your experience in life and your imagination. You’re using both of those things all the time, and you’re exploring things about your character through the character you’re playing—situations, emotions (and) relationships. So I think all of that makes you constantly explore the world and changes your outlook on it.

Q: Did you question your character’s decision to separate himself from his younger children to search for his missing wife and oldest son?

McGregor: I couldn’t. It’s not something I even asked (director) Juan Antonio about because I didn’t judge his decisions at all. We cannot imagine what it would be like to be in that situation. We can’t imagine the shock. That was the one thing I had to learn by speaking to survivors of the tsunami—about that level of shock. It’s the one thing that would be easy to overlook.  But being on your holiday with your kids at a pool, and then having something so horrendous like that happen, and then not knowing where they are—what it must do to your brain? It’s so shocking? I couldn’t judge anything that he did.

Q: Did you meet Enrique, the man that you’re portraying?

McGregor: Yes. He’s here. I just saw him in the corridor, and Maria’s knocking about out there. It’s important to remember that he lived through this.

Q: How much time did you spend with him before shooting, and was it important because you’re not depicting someone who’s famous?

McGregor: I didn’t meet him at all before we started because I was filming “Salmon Fishing in the Yemen.” I was (shooting) in the desert in Morocco with Emily (Blunt), and I was texting with Naomi. I’d ask her “how’d it go in the water tank today? Emily and I are having a nice time in the desert.” She was like, “yeah, that’s funny.” So I didn’t have a chance to meet Enrique beforehand. I spoke to him on the phone. There was some talk that he might come to Morocco, but it didn’t work out.

Q: Did it matter that he’s Spanish and you’re Scottish?

McGregor: No. I knew the director knew him, and I knew that the writer had spent a lot of time with him. So I trusted that they’d steer me in the right direction. They told me a lot of things about him, like he’s a serious man. His one fear had always been that if something ever went wrong or if he was in an accident, would he be man enough for his family. So I knew all of this background about him, but I didn’t feel like I had to play him physically. After about a month of our shooting, though, I was suddenly worried. What if he doesn’t think I got him at all? What if he doesn’t like it, or he feels I haven’t captured him? It became really important so I did meet him, and I think he liked (my performance).

Q: You’ve depicted characters based on real people before. Does it help or hinder you to meet the real person prior to portraying them?

McGregor: It’s easier if they’re not there, in a way. I remember when I was making “I Love You Phillip Morris,” I had this whole elaborate plan not to meet (the real Phillip Morris). They day he came to the set, they met him at the car and took him to visit the wardrobe department and all these places, so that by the time he got to the set, I’d finished playing the scene. (He chuckles.) I couldn’t do it if he was standing at the monitor.

Q:  I know you love motorcycles. So did you get a chance to do any riding while you were in Thailand or was it just work, work, work?

McGregor: No, I didn’t ride in Thailand because driving’s really erratic there. There are a lot of scooters and stuff on the road. I was very tempted to get a scooter to get around. But in that environment, I just thought it was probably better not to, because if I fell off and broke my leg or something, it wouldn’t be good. We were having trouble enough with the weather and we had enough delays in this film without me adding to them so I didn’t. Sometimes (on movie locations) I do. I just ride anyway. But for this one, I didn’t. I could see it in print: McGregor delays the shoot. So I didn’t do it. It would be beautiful to ride there, though. I think (riding) bicycles are a nice way to see Thailand because you can take it at a slower pace.

Q: What’s your biggest fear as a father? Did you fear something else before making this movie? Or does it keep changing as your kids get older?

McGregor: (He laughs.) I don’t have a favorite fear with my kids. That would be terrible.

Q: I don’t mean favorite, but do you worry as they become dating age?

McGregor: My oldest daughter is 16. There’s nothing wrong with kids dating. That’s part of them growing up. It’s all good.

Q: With Christmas and New Year’s coming up, do you have special plans?

McGregor: I’ll be with my family. That’s the most important thing.

McGregor: I’m making a film next year with a brilliant and young Australian director called Julius Avery. It’s called “Son of a Gun.” He wrote it and is going to direct it. This is his first feature, and it’s going to shoot in Perth, Australia for nine weeks or so in February.