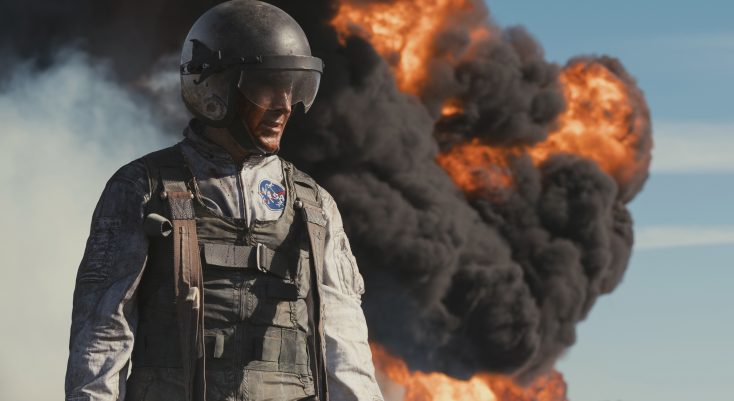 HOLLYWOOD—Next year marks the 50th anniversary of the first successful manned mission to the moon. For those who were around to witness that remarkable feat—American astronaut Cmdr. Neil Armstrong stepping off the lunar module and uttering the memorable if slight messed up phrase, “That’s one small step for man; one giant leap for mankind”—it is a glorious example of achieving near-impossible goal when a nation if it sets its mind to it.

“First Man” tells the story of Armstrong, played by Ryan Gosling (“La La Land”), and his wife, Janet, played by “The Crown’s” Claire Foy, who provided the much-needed moral support he needed to go into that dangerous journey a half century ago with fellow astronauts Col. Eugene “Buzz” Aldrin and service module pilot Lt. Col. Michael Collins.

The adventure drama reunites Gosling with his “La La Land” director Damien Chazelle, although this time he only does a little slow dance with Foy.  The film recounts the American side of the 1960’s space race from the point of view of Armstrong, who suffered a terrible personal loss just as he went from being a test pilot to getting hired by NASA as part of its Gemini astronaut team.

Gosling and Foy spoke about their journey toward depicting the young couple, who endured the triumphs and tribulations of being part of America’s tightly knit space community and the dangers it presented.

Q: What was it about director Damien Chazelle’s idea for this film that excited you?

Foy: Damien is a very exciting person and I loved the idea that he had which was to tell the personal side of the story and to highlight how treacherous these missions were. And to investigate it from the point of view of a person who was not necessarily someone you would make a movie about. He was a very ordinary person.

Gosling: What was exciting was how many exciting elements there were to it. It wasn’t just one, it was so rich on every level. Just on an experiential level of having the film start under the wing of an X-15 and shot up in the atmosphere to having it end on the moon. As a pure experience alone, it was exciting and Damien’s instinct, on a personal level to just focus on Neil and Janet Armstrong and their family and understand the personal sacrifice involved for them.

And, then the sense, on a larger level, this achievement made everyone (understand) what we were capable of it there was a collective interest to accomplish one thing, we could accomplish impossible things.

Q: Ryan, how was your experience making the film?

Gosling: Seeing the Apollo 11 capsule, those visits to NASA, just sitting in these carefully reconstructed capsules, having astronauts that were involved in those missions talking to me in my ear through the scenes, it was a very, very surreal process, an opportunity that I still can’t believe I got to have.

Q: Do you think Neil Armstrong, a former test pilot, was especially brave?

Gosling: it takes a certain kind of person to knowingly get into a plane that has never been flown and push it to its breaking point so that you can find its weaknesses and improve it, I think that says something about Neil. In this specific flight that he took, he takes it to such an extreme that his life is really in jeopardy.

Q: It’s been nearly 50 years since Armstrong first walked on the moon. What are your thoughts when you think about that and now that you’ve done the film?

Foy: I asked my mom about it. She watched the moon landing as it was happening and I tried to get an understanding of what it was like pre- and post- that achievement. And she just said that no one thought that we could do it. We were underestimating our own ability I suppose and I have grown up knowing that we were capable of doing that which was and it would be nice in my lifetime if we could do an achievement that was for all Mankind again. Something purely positive would be really nice.

Q: Ryan, when you look up at the moon now, has your perception of it changed?

Gosling: Yeah. Now I think of it as only three days away, which I can’t help but think about now, this incredible shift in this thing that was once unknowable.

Q: What inspires you most about the Armstrongs and what will inspire the audiences when they see the film?

Foy: I was inspired by their perseverance to live really. They’d just had such tragedy and pain and struggle and yet they were able to get through their life as a family and as individuals and lead pretty extraordinary lives and I find that amazing.

Gosling: When you learn about just what they were enduring during these missions and the amount of loss that they had experienced, they were people who lived their lives out of their own self-interest for a higher ideal. That’s always an inspiring story but when you learn about them specifically and who they were as people, it’s even more inspiring.

Q: Did you and the cast gain more respect for those early astronauts?

Gosling: Our respect just grew by the day as we were trying to wrap our heads around the technical and emotional obstacles that they were dealing with on a regular basis. Also, I think we all benefitted from this perspective that space exploration had given them.

Q: Claire, did you enjoy learning about wife Janet and the family?

Foy: Without examining him as a person and his family and the people he’s surrounded by, you wouldn’t be able to understand the man. They suffer a great tragedy that I can’t imagine any family would ever recover from, but out of that comes this extraordinary decision and bravery in him, what the tragedy drives Neil to go and do.

Q: What did you learn about the Armstrongs’ (Janet and Neil’s) relationship?

Foy: They’re very different people, Janet and Neil. I think Janet is very gregarious and outgoing and loves having people around. She’s a very open person. From her friends, I learned that she would drive 600 miles to see a friend because they needed her. Neil is very different. He wasn’t introverted but he had so much going on in his mind that he didn’t need to look out so much so he didn’t need to be so social. That’s what he sees in partner Janet. She carries the load. She takes care of her end of business.

Q: What does Ryan bring to the role of Neil Armstrong?

Foy: Neil didn’t do what everybody does which is try to make everyone else feel great about themselves. Or if there is an awkward silence, try and fill it. That’s not what Neil did and I think innately, Ryan, as a person is kind-hearted and generous and warm. I think that just naturally what he brings to the point where I’m playing Janet in a scene and supposed to be really angry with him and I’m just not (she laughs). He’s really nice.

Q: Why is his story so compelling?

Foy: This is the story of a man who was just extraordinary and only one other person knows what that experience (walking on the moon) at that time was like for him and that’s Buzz Aldrin. The film isn’t about just the mission, just getting to the moon or just the space program, it’s about him as a human being and what it means for a human being to make such extraordinary strides for humankind and what pushes him to put his life at risk for the rest of humanity.