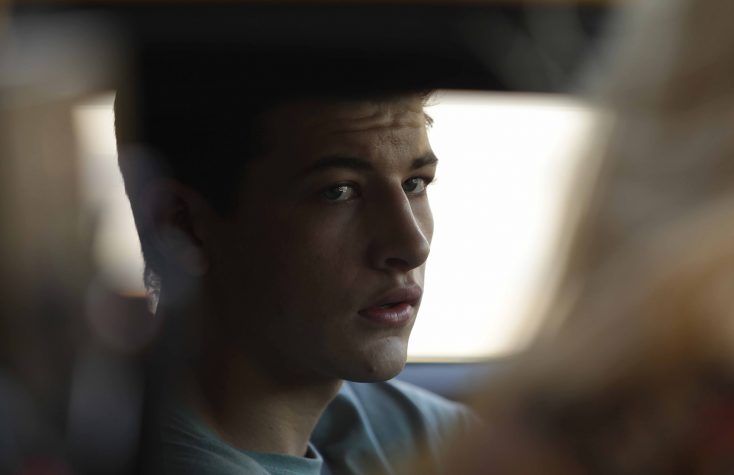 HOLLYWOOD—Up and coming actor Tye Sheridan played one of Brad Pitt’s sons in Terrence Malick’s hailed drama “The Tree of Life,” and subsequent starred opposite Nicolas Cage in David Gordon Green’s “Joe,” as an adolescent seeking refuge from an abusive parent, along with playing other teenage roles in mostly independent films. Last summer, he gained the most exposure to date, playing the young mutant Cyclops/Scott Summers in Fox’s fantasy blockbuster “X-Men: Apocalypse.”

Sheridan, 20, now plays a law student who suspects his stepfather may be responsible for his comatose mother’s condition following a car accident. While trying to drown his sorrows at a bar one night, Harper (Sheridan) meets a mysterious grifter named Johnny (Emory Cohen), who agrees to kill the young man’s stepfather for a hefty fee. The next morning, Harper is having second thoughts, but volatile Johnny, who has brought along his stripper friend, Cherry (Bel Powley), insists they move ahead with their deadly plan, which is to drive to Las Vegas where the stepdad is suspected to be with his mistress.

The journey from Los Angeles to Las Vegas, like so many ill-conceived road trips, has its share of detours and complications, including a tense encounter with a highway patrolman. There also is a matter of what Harper has been up to prior to Johnny and Cherry’s arrival, which is revealed in a series of flashbacks as the trio makes their way to Sin City.  “Detour” is now in theaters as well as available OnDemand, on Amazon Video and iTunes.

Hailing from Elkhart, Texas, Sheridan, 20, exhibits a natural southern charm, peppering his responses with “Yes, ma’am,” and “No, ma’am.” In signing on to star in “Detour,” he says he was eager to play a more grown up role and work with British writer-director Christopher Smith, best known for his horror films “Creep, “Triangle” and “Black Death.” “Detour” is more of a psychological thriller, where it’s never quite clear who can be trusted.

Q: There’s a lot of suspense that Christopher Smith builds through the course of the film on Harper’s relationship with his stepfather. It kind of unfolds at the film goes on in a split-narrative structure.

Sheridan: That was the biggest element that stuck out and attracted me. Typically, we see these stories told where sometimes where there’s a twist in the film at the end but it’s done in a very unconventional way. Chris is so clever and thinks outside the box. When I read this script, it just blew me away. I knew immediately I had to do it. I was on the edge of my seat the whole time (while I read it). When I got to the end, I went back and re-read it. I love films that do that.

Q: While your character is young man, he is a little older than previous characters you’ve played.

Sheridan: Yeah, that also appealed to me. It’s the most adult character that I’ve played. It was the one that pushed me so much further. It was challenging in some ways but I also was really ready for it. I’m was really excited about it and the chance to work with Chris and Bel and Emory, and the (crew) in South Africa were just great. We had such a great time making this movie.

Chris already had shot a movie in South Africa and he came up with this crazy idea that we could cheat the desert there. It’s way cheaper there.

Q: What were you doing at the time you read the script for this?

Sheridan: At the time, I was looking for something that was edgy and a little risky, and then this came up. I read the script and then got on the phone with Chris and we started talking and then a few weeks later we were making this movie.

Q: How long was the shoot?

Sheridan: We shot for about eight weeks.

Q: Was that your first time in South Africa?

Sheridan: Yeah. It was the first time I was working outside of the country. I couldn’t have been any further away from my home in Texas. It was a crazy experience but a good one for two months.

Q: Were you far from civilization?

Sheridan: No, ma’am. We were right in Cape Town. It’s now one of my favorite cities. The people there were so great. I would recommend going there and then visiting Australia and New Zealand. If you’re down there, it’s still another eight hours to Australia, but totally worth it.

Q: Did you, Bel and Emory get a chance to hang out and go to dinner?

Sheridan: I might have possible met Bel once briefly before the film. I didn’t know Emory. I had only spoken with Chris on the phone. So everybody just came to South Africa and we all met each other. Then it was like the puzzle pieces fit and we bonded and worked together.

Q: Did you rehearse?

Sheridan: Not much. The first week we started shooting we shot everything that takes place inside Harper’s house. It was mostly me and Chris and occasionally Stephen’s (Moyer, who plays the stepdad, Vincent) dead body.

Q: You got to do a bit of driving in this film.

Sheridan: I drove the little Fiat. It was fun because it was actually a right-hand drive. For the film, they took it out of the right side and moved it to the left. It was still standard (shift) so it was interesting driving that car; a lot of fun. I like driving cars.

Sheridan: Yeah, sometimes. I like snowboarding. I like to play sports when I can, more so when I was younger. But even now, I like to be outdoors.

Sheridan: I haven’t seen it yet. It’s one of those things as an actor you always struggle with no matter how confident you are in the film. I’m always passionate about the work that I do but it’s also nerve-wracking going into a film festival and not having yet seen the film, and knowing you’re going to see it with an audience for the first time. We’ll see how it goes and hopefully the film will be received well. I’m really excited about it.

Q: Have you been to Sundance before?

Sheridan: It’s so much fun. The days I’m not doing press, I can go snowboarding. Also, everybody you’d like to meet at some point in your career is in Park City.

Sheridan: Yeah. You run into a lot of old buddies and people you’ve always wanted to meet. It’s crazy but if it’s managed in the right way, it’s great. I’ve heard horror stories some people have had going to Sundance but I’ve been fortunate enough to have really great people taking care of me.

Q: What can you say about working with Steven Spielberg on that?

Sheridan: He’s so incredible, so great to work with. He’s like a big kid. He has such a youthful energy especially towards movies. When you talk to him about a movie, he gets really excited about it. It’s great to work with someone like that and stand next to him and watch him for four months (I worked with him) is like the greatest film school I could imagine.