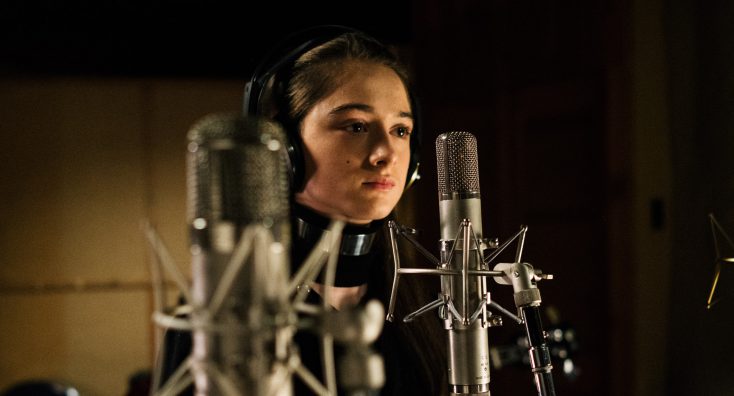 HOLLYWOOD—Raffey Cassidy has worked with some of the top names in Hollywood, from George Clooney (in Disney’s “Tomorrowland”) to Johnny Depp (in the big screen version of “Dark Shadows”). The British teenager now adds Natalie Portman (the “Star Wars” franchise) and Jude Law (“Fantastic Beasts: The Crimes of Grindelwald”) to that list of famous co-stars.

The 16-year-old plays dual roles in the film: the younger version of Portman’s pop star character as well as the singer’s daughter in the second half of the film by emerging filmmaker Brady Corbet (“The Childhood of a Leader”). Young Celeste survives a horrific tragedy only to become famous for a song she co-writes with her older sister and sings. Soon, she becomes a pop star, with all the trappings that come with it. Later in the film, she plays that character’s neglected daughter Albertine. For the role, Cassidy had to sing, dance and learn to speak with a convincing Staten Island accent.

Cassidy began her career at the tender age of 7, following her older siblings into the family business. Her father is an acting teacher. The youngster landed her first role on a British TV series while tagging along with her older brother on an audition. After a series of TV appearances, Cassidy’s breakthrough film role was playing the younger version of Eva Green’s Angelique character in Tim Burton’s “Dark Shadows” in 2012.

Poised and impeccably dressed in a white blouse and black pants for an interview, the young actress has determined already that she plans to continue acting, unless something better comes along.

Q: You had a lot of work to do; singing, dancing, you had an accent. So, tell me a little bit about your preparation for the film.

Cassidy: I worked on the accent because I needed a Staten Island accent which was difficult because it’s completely different to New York so I worked on that for a bit then I worked on my singing. I’d previously had (singing lessons) because for “The Killing of a Sacred Deer,” the film I did before this, I’d had some singing lessons so I’d had a bit of practice from that which was good. And, for the dancing, because she was supposed to be new to it, I would learn it the day before and shoot it the next day.

Q: Of those three things you had to learn, which was the most challenging for you?

Cassidy: The most challenging was probably singing because it’s not something you ordinarily do but I guess it’s in the character so you just get used to it but that was probably the most difficult.

Q: You have a dual role in this. You were very convincing as these two different people. What was the challenge in playing a dual role?

Cassidy: I guess it’s trying not to make it gimmicky or being the same person. You don’t want to then try to do different things to make them act like a different person. It wasn’t supposed to be like that. It’s supposed to be that, after a certain period of time, you do realize that it’s the same actor so I think that was really important for (director) Brady (Corbet) to have differences but not to have it gimmicky. But it was also fun to do. It’s kind of challenging at the same time. It was shot sequentially so we did young Celeste then I’d move on to Albertine so I’d completely forget the Celeste character and focus on Albertine.

Q: You’ve worked with interesting directors. You mentioned Brady and also Yorgos (Lanthimos, who directed “Killing of a Sacred Deer”) is also an interesting, iconic, unique director. You’ve been doing this since you were seven. What have you learned from the filmmakers?

Cassidy: With all of the directors I’ve worked with I’ve been so lucky that they all have had their own style. So, I think that’s been very beneficial that I have experienced all these amazing directors’ different styles. Like Yorgos, as soon as you watch a film you can tell it’s his. Brady, I think you can tell (a film) is his. He has a certain style. And, also, Brady was such an amazing director, the way that he would give you directions really worked. He was very specific but then also would let you play around. I think that’s probably because he was actually an actor before he was a director so I think that probably helped a lot and gave him a sense of how to properly portray because he knew what it was like to be in that position.

Q: A lot of people might be shocked at the beginning of this film. You know there is a tragedy but you don’t know what it is until you get in there. I can’t think of another film that has such a ‘you are there’ in that moment (feeling). That aspect of it was very shocking to me. The film touches on different issues like that and this cult of fame. Were some of those themes of the film, things that you are concerned about; things that affect you personally?

Cassidy: The whole world is concerned with events like that (school shootings) because it’s impacting the whole world. That’s what drew me to the script, the fact that the tragedy is there as soon as you sit down. It doesn’t let the audience settle in. It just throws you right in which is kind of what happens in the real world because no one expects it. The reactions are real.

Q: And on the fame issue, people often know who pop celebrities are and not world leaders. What do you think about that?

Cassidy: What we see is that Celeste didn’t really deal with the trauma. She kind of just pushed through and pushed it down deep under which didn’t work because it comes back and haunts her later in life. I think you can tell through the way that Natalie plays it that she hasn’t gotten over it. It’s played a massive part in her life. I heard Natalie say that she was birthed from it which it so true. This is her now. From that incident, her innocence was taken. She made a deal with the devil that she would give her innocence to live in this fame world.

Q: You work with some veteran film actors on this–Natalie Portman and Jude Law. What was it like working with them? Did you get a chance to bond at all?

Cassidy: Everyone was like a little family on set. It was really nice because we worked together every day for like twenty-two days which is super short to shoot something but we weren’t all thrown into the deep end but we all got together. It’s very helpful that they’re such lovely people and so easy to get along with and so much fun to work with. They like to play around with things. The diner scene I had (with Portman) is one of my favorite scenes. It was just so much fun to do and it was long and we could just go through with it. But they’re so much more experienced than me. You learn things without knowing. You’re constantly watching them every day so you’re bound to learn things. I don’t think it is until you go away and do something and think ‘Oh my God, I remember seeing this person doing that,’ that you actually realize that you are learning and taking things from them daily.

Q: This is the third film in which you play a young version of someone else (there was “Snow White and the Huntsman”, “Dark Shadows”). But since you shot your scenes before Natalie shot hers, I imagine you didn’t have to study her mannerisms to create your character in this?

Cassidy: We used Brady as the middle person to connect the two—young Celeste and older Celeste. They are two completely different characters so it wasn’t important that we were the same person because they’re two different people so we never sat down and had a chat about it. We just relied on Brady to connect the two. But, they’re two different characters and I think that’s what Brady wanted is for you to see that the person you see at the start was nothing like the person you would see at the end.

Q: Now that you’ve been doing this for almost half your life, I assume acting is the career you want to continue with. Are you planning to go to college after you finish high school?

Cassidy: I have about a year and a half left of high school. I guess you never know. I could completely change my mind in 20 years but, at the moment, acting is all I want to do. It’s what I love but I also have an interest in fashion which I would like to explore but only ever on the side of acting.

Cassidy: Yeah. I would love to design and have my own company.