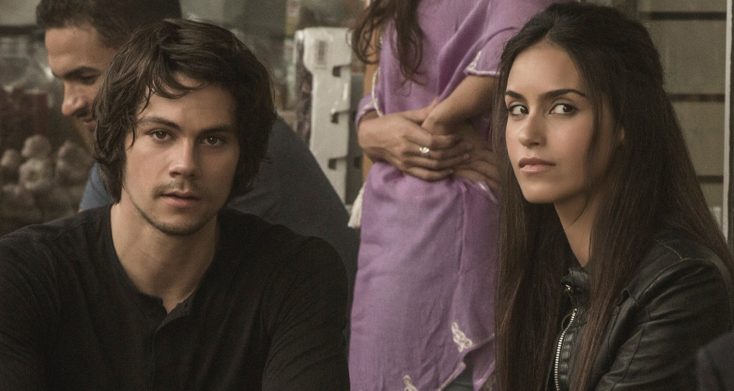 HOLLYWOOD—Iranian-born actress Shiva Negar lived in Turkey for a time before her family emigrating to Canada as a teenager. Little did she know that possessing a command of both the Persian and Turkish languages would become useful for a movie role.

In “American Assassin,” Negar plays a Turkish agent who is assigned to assist Mitch Rapp (Dylan O’Brien, “Teen Wolf”), a CIA black ops recruit stop a mysterious operative (Taylor Kitsch, “Lone Survivor”) from starting a war in the Middle East. Rapp is trained by Cold War veteran Stan Hurley (“Birdman’s” Michael Keaton), whose methods are slightly unorthodox. The pair is enlisted by CIA Deputy Director Irene Kennedy (Sanaa Lathan, “The Perfect Guy”) to investigate a wave of apparently random attacks on both military and civilian targets in Europe, and they are joined in their effort by Annika (Negar), who harbors her own secret past. The action thriller, directed by Michael Cuesta, is based on the novel by Michael Flynn.

Negar, who now calls Los Angeles her home, spoke about playing a trilingual Turkish agent who is as beautiful as she is lethal.

Q: What was it about the part in “American Assassin” that you liked?

Negar: Annika’s a Turkish agent. She’s in Istanbul working in Turkish intelligence. I’m Iranian and I lived in Turkey. I got emotional when I read about her. Aside from the spy craft stuff, there are all these layers to her. Being where I’m from, it was very touching. I really wanted to be part of that. Her role was not the cliché. She wasn’t just the badass chick who gets to make out with the protagonist. She has a tragic past which is similar to the Mitch Rapp character in that she’s lost loved ones.  All the pain in the past made her stronger. She’s become who she is and she’s decided to take this path and do something about it for the greater good. I loved that it toughened her up instead of her giving into the pain and being the stereotypical character. She’s fierce and she’s strong and she’s in a man’s world.

Q: Annika takes a punch as well as gives. The scene in the hotel where you and Taylor Kitsch are fighting looked pretty intense. Did you get bruised up?

Negar: (She nods her head and laughs.) It wasn’t too bad because they did a pretty good job of choreographing the fight scenes. We knew how to move and where it was going. That weren’t sure because at first it was going to be a slap and a punch to Dylan (O’Brien) and then they changed it up. It makes it more interesting when Ghost (Kitsch) punches Annika. She’s just one of the boys. It doesn’t make a different to him. That was one of the challenging, cool fight scenes we did.

I love that there are a lot of layers to her. Besides her toughness and being in the game, being a team player with the male CIA agents, she has her feminine side.

Q: You’re not only strong and fierce in this role, but your wardrobe is amazing.

Negar: Yeah, and it gave you a different perspective of her. She faces her pain at one point in the film also.

Q: You have an intense scene where someone—we won’t say who or why—is trying to drown you. What can you say about that scene without giving away any spoilers?

Negar: They showed a little bit of it in the trailer. As things unfold, he feels like there’s something she hasn’t told him. She’s keeping secrets from him.

Q: That’s you in the water, though, right?

Negar: Oh yeah. That’s definitely me. That was pretty challenging. I had never done that before. They were trying to figure out how to do it in the safest way. Should they put Vaseline or cotton up my nose. I said, “No, let me try to see if I can do this as real as it can get.” I didn’t want it to be simulated; I wanted it to be real and raw so I just went all in. I told Michael Cuesta (the director), if I can’t do it, I’ll let you know. I’ll be honest. So, I did it. It wasn’t easy—I felt it in my sinuses, definitely the next day—but I was happy with how it turned out. I was able to hold my breath for some time.

Q: This film was shot in different locations around Europe and elsewhere. Did you shoot most of your scenes in Rome?

Negar: Mostly in London, but I was in Rome for two weeks. I was in London for about a month and a half.

Q: In addition to being a professional actress, you hold a master’s degree in psychology and marketing?

Negar: Yeah. They have this one year program in Canada for marketing and PR. I went to York University (in Toronto).

Negar: I started my career in Toronto because I grew up in Toronto. But I was born in Iran. I was really young when we left and I’ve never been back. We lived in Turkey for a few years so I speak both Farsi and Turkish. With Turkish, I’m starting to forget it because I haven’t been able to practice it. The fact that I speak those languages, as well as English, came in handy for the film. I never would have guessed that knowing how to speak Turkish would help me in my (acting) career. Maybe Spanish for when I go out for Latino roles.

When I read the script for this film, I thought, “Wow, this is why I needed to go through my life.” It’s weird how things connect.

So, after living in Turkey, we migrated to Toronto. I grew up in Toronto for the most part. I went to school in Toronto. I always was in performing arts, even in Turkey. I learned how to play piano in Iran. My mom put me in classes when I was really young. In Turkey, I learned a little bit of guitar. I love music and I was in theater. I used to perform in small music recitals and I continued that when I was in Toronto. But I knew I always wanted to be in movies. Acting and music are two of my favorite things. But it’s tough. You sort of fall into what’s expected of you: go to school, graduated, get a job, get married, have kids. It was tough for me to push through all that. I had to prove myself to my family. It took years. My mom was like, “What are these auditions? You should stop going to auditions.” She’s my role model but she doesn’t understand the field that I’m in. She’d understand if I were a lawyer or doctor.

Q: Is your mom starting to get it now that you’re getting all these wonderful roles?

Negar: It started when I was still in Toronto. While I was in school and doing my master’s, I had an agent. I was going on auditions. Sometimes I wouldn’t even tell her. I kept doing it. I was taking classes. I went to the New York Film Academy in L.A. I took a two month leave of absence from my fulltime job. Every dollar I was earning I was reinvesting in my acting. My girlfriends were buying Gucci bags. That was not me; I was so different. They didn’t get it.

Q: You invested in yourself?

Negar: Yeah, that was my passion. My passion wasn’t holding a designer bag. That was like the last thing I cared about. One of my first really good gigs that I got when I was in Toronto was on the last day of my final exam for my master’s. To be honest, I was thinking of quitting. I was going to ask my professor if he could give me a job as a planner or a something in PR for a hotel, like a Four Seasons. But that same day, I got a call from my agent who said I got an audition for a guest-starring role on an American show. I felt that that was a sign. And after that, it was one gig after another. I had a recurring role on a Disney show and another American show called “Covert Affairs.” I was doing a lot of film and TV and slowly my mom was seeing it and she was really proud. Obviously, this field as a lot of ups and downs. There would be times when I didn’t have a job for six months and she’d be asking me, “What’s going on?” One of the things I did is that I didn’t move out. I saved up because I knew that I wasn’t going to stay in Toronto. I knew that if I wanted to pursue (acting) I had to come to L.A. eventually. I wanted to have a good resume before I left so I built it up there. Characters Talent Agency is like the CAA of Canada. I gave myself a goal of seven years and then I moved here about a year and a half ago. I’ve been back and forth since 2008—half here and half Toronto. I made the official move in 2016.

Q: Was it for a specific role?

Negar: No. But I had a lot of meetings here and auditions. The castings were taking place here. Even though a lot of productions shoot in Canada, they take care of a lot of the castings in L.A. and they cast the smaller roles in Toronto, which is how I started out.

Q: You have the lead role in the upcoming “Becoming Burlesque,” right?

Negar: It was really fun because it was such a different genre. Going from a badass CIA agent to a burlesque dancer was really cool. I got to explore a little bit. I went to the Burlesque Hall of Fame in Vegas to research the role. I learned so much because I didn’t know anything about that world. They’ve got these huge competitions. It’s so cool. We had a great team of burlesque dancers that were teaching me how to do it. It’s about a Middle Eastern, Muslim girl who becomes a little bit of a rebel and goes after what she feels like she fits in. But there’s the whole conflict with the family. Boy, can I relate to that.

I just wrapped this really cool film called “The Amaranth,” which was shot in Sun Valley, Idaho. It’s a thriller starring Melora Hardin and Jeff DeMunn. That was a really cool twist because it’s different from (“American Assassin”) but now that I got a little taste of the action genre, I want to do more. I want to play empowering female characters.