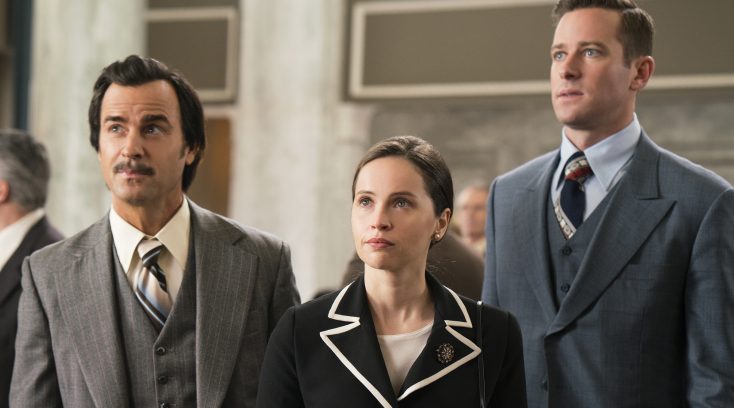 HOLLYWOOD—Acclaimed filmmaker Mimi Leder says she felt compelled for a variety of reasons to direct “On the Basis of Sex,” a film based on the early career achievements and obstacles faced by feminist attorney Ruth Bader Ginsburg, who later became the second woman appointed to the U.S. Supreme Court.

Like Ginsburg, Leder long has been a champion of gender equality in the workplace in a field that historically has been dominated by men. So, when she was approached about helming Daniel Stiepleman’s screenplay about the early years of his famous aunt, she was all-in.

“On the Basis of Sex” follows young lawyer Ginsburg (played by Felicity Jones, “Rogue One: A Star Wars Story,” “The Theory of Everything”) as she teams with her tax attorney husband Marty Ginsburg (played by Armie Hammer, “The Lone Ranger,” “The Social Network”) to bring a groundbreaking case before the U.S. Court of Appeals in order to overturn a century of gender discrimination. The drama premiered in theaters in late 2018 to coincide with Justice Ginsburg’s 25th anniversary on high court, and is rolling out to more theaters this month.

Leder, who has notably helmed numerous TV shows including “ER,” “Shameless,” “The Leftovers” and more as well as movies including “Pay it Forward” and “Deep Impact” over her long and illustrious career in Hollywood, spoke by phone about celebrating this iconic public figure in this feel-good film.

Q: What was your interest in making a film about Ruth Bader Ginsburg?

Leder: This is a film about how change happens. It’s an origin story of a living icon that I have admired for so many years. It’s a story about how we rise and how smart people who believe in justice rise. It just appealed to me on a very personal level. I very much related to R.B.G. though I didn’t know a lot about her personal life but I knew, obviously, who she was. So, I was really surprised when I read the script I began to understand how she became who she is today. She had an extraordinary marriage to a very progressive husband. So, I connected on a very personal level because I’ve also been in a long and loving relationship with my husband and I understood from R.B.G. what it meant to succeed in a male-dominated (profession), and to have the support in a loving relationship. We had a lot of commonalities but I’d never compare my achievements to hers. We’re both Jewish. We’re both mothers.  We’ve both had longstanding marriages. And we’ve both broken glass ceilings and paved the way for others in our own ways, obviously in different generations. So, I felt very connected to her having felt discriminated against on many levels in my career and just in life.

We joke a lot that Ruth is a superhero but the truth is that Ruth Bader Ginsburg is a woman who, like many generations before her and since, we’ve all withstood the overt slights and discrimination of the culture around us but what she did is that she’s a woman that changed that culture with her intelligence and eloquence and, as I said before, with the support of a brilliant, good man in Marty Ginsburg.

Q: It’s interesting that this story centers on this groundbreaking case of gender discrimination, but the complainant Ginsburg represents is not a woman but a man.

Q: It was interesting that the Martin character in the film is more than simply a prop. He’s integral to Ginsburg’s success. He took care of the children while she forged her career, and he brought the gender-discrimination case to her attention.

Leder: And he had his career as well. He became one of the preeminent tax attorneys in the country. One scene that’s not in the movie is he would go home at 4 p.m., cook dinner for the family, they’d eat together, and then he’d go back to work, because she was a terrible cook.

Q: What was it about Felicity Jones that made her your casting choice for Ruth Bader Ginsburg?

Leder: I kept looking at pictures of Felicity and a young Ruth Bader Ginsburg, and there was a such a striking resemblance that I couldn’t get her out of my mind. Felicity is one of the most extraordinary actors of our time. She has a great depth and understanding of people, and her process of learning about them and finding the essence of the character is deep. She really researches deeply. I thought she really would become (Ginsburg) and not impersonate her.

We weren’t setting out to make a documentary. We were setting out to make a movie about real people who did real things and felt real things. When I met her, I felt she embodied the qualities of R.B.G., and not just her looks but she had a real depth and openness.  And then I cast Armie (Hammer). I didn’t know if they were going to have chemistry, and I’d never seen Armie play a guy like this but I knew he had the charm, and was funny. I knew he could be very charming; I’d just never seen it in a film.

You can look at an actor, individually, and say, “You’d be great in this role,” but you never know if you’re going to have chemistry until you put them together and it’s quite remarkable what they were able to do.

Q: Before this film, you directed 10 episodes of “The Leftovers.” Since you worked with Damon Lindelof on that, are you going to be directing any episodes of his upcoming HBO series, “Watchmen?”

Leder: Unfortunately, I am not. I wasn’t available. I was still in post-production on this film when he got the green light to make “Watchmen,” so I, unfortunately, could not direct the pilot. I certainly wish that I had been able to but now I’ve moved on to the “Untitled Morning Show,” starring Jen Aniston, Reese Witherspoon, Steve Carell, Billy Crudup, Mark Duplass and Gugu Mbatha-Raw. It’s an incredible cast. I can’t really tell you anything about it except that it’s going to be remarkable.

Working with Damon Lindelof was such a remarkable and life-changing experience, He’s such a brilliant writer that it was hard to say goodbye to (“The Leftovers”) because I loved the storytelling so much. I was very fortunate to work with Daniel Stiepleman on this film and to shape it and birth this film.

And now, I’m working with another writer, Kerry Ehrin, who created the “Untitled Morning Show,” who’s another remarkable voice. There are so many great voices out there that I hope when you leave this film that you’re left with using your voice to go out and do whatever you can do small or big to make the world a better place. We need it. We live in poisonous times.