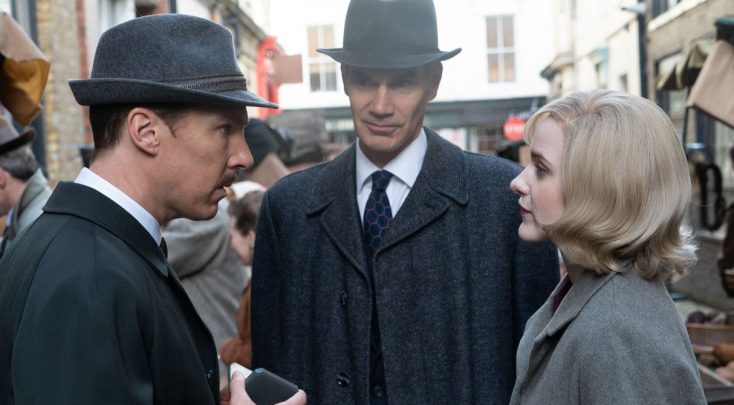 HOLLYWOOD—British writer-director Dominic Cooke has a long history with celebrated actor Benedict Cumberbatch, which dates back to the early 2000s, when he directed the rising star in plays on London’s West End. He later directed the “Avengers” and “Sherlock” star in the historic epic TV series “The Hollow Crown.”

So, when Cooke, who previously directed Saoirse Ronan in the 2017 romantic drama “On Chesil Beach,” began reading Tom O’Connor’s screenplay about real-life British businessman-turned-spy Greville Wynne, he knew he had one actor in mind for the role: Benedict Cumberbatch.

“The Courier” is set during the Cold War, as allies Britain and the U.S. team up to fight the Soviet Union in the nuclear arms race through espionage. As Wynne, the mustachioed Cumberbatch is a civilian businessman who happens to conduct a lot of ordinary non-military business dealings behind the Iron Curtain. He is recruited by Britain’s spy agency, MI-6 and by a CIA operative to make contact with a Soviet dissident, who they’ve heard is willing to share secrets with the West. Wynne is assured that he will not be in danger because he will not be privy to the contents of the material he is collecting and transporting back to England.

The patriotic Wynne agrees to the proposal—not even telling his wife—and ends up relaying numerous pages of secret Soviet nuclear data that Oleg Penkovsky (Georgian actor Mehreb Ninidze), a high-ranking former Soviet military hero, who fears the consequences of his leaders’ actions. Aware that his frequent trips to Moscow and the Soviets’ discovery that some of their vital secrets are being leaked to the West, Wynne eventually decides to pull out. But, then when he discovers his now-friend Penkovsky and his family are in danger, he returns to help them escape, only to get caught himself by Russian authorities. (SPOILER ALERT) He is thrown in prison, where he suffers unspeakable torture. The film also stars “The Marvelous Mrs. Maisel’s” Rachel Brosnahan as CIA operative Emily Donovan and “Fargo’s” Jessie Buckley as Wynne’s wife, Sheila.

Lionsgate and Roadside Attractions will release “The Courier” in approximately 1,300 theaters Friday March 19.

Front Row Features spoke with Cooke, who served as the Artistic Director and Chief Executive of the Royal Court Theatre from 2006 to 2013 and was appointed a Commander of the Order of the British Empire in 2014, about “The Courier,” which he considers something beyond a simple spy thriller.

Front Row Features: Tell us about your interest in making “The Courier.” What sparked your curiosity about the story set during the Cold War?

Dominic Cooke: I’ve always been interested in that extraordinary period of history. I actually studied it at school. We had some very resourceful teachers who took us on a trip to the Soviet Union in the early 1980s. That was quite something; I’m really glad I went. It really helped me with the movie because it was so particular. It was so different from anything I’d ever experienced. There were some memories that I had from (visiting the Soviet Union) that fed into the movie.

FRF: This reunites you with Benedict Cumberbatch, whom you directed in “The Hollow Crown.” Did you think of him right away as your central character for “The Courier?”

Cooke: Yeah, I did. We actually go back even further because I did a play with him in 2007, and I produced another play with him in it two years later. So, we’ve had this ongoing working relationship and friendship. Within the first 20 pages, I thought of him for the role.

Cooke: For the research, I studied everything. Tom worked with everything that was in the public realm; there were some really good books written about this. What happened is the CIA released all the papers in the 1990s, and they’re the most reliable source because it was so politicized—as you can imagine—from both sides, and there were very strong reasons not to reveal everything to the public. And then you have Greville’s account, which was fictionalized to make him appear more heroic and knowing than he actually was. There was a very particular reason for him doing that, which is that he lost a lot of his business (while he was in a Soviet prison), because his business had been in the Eastern Bloc. He needed a way to make a living so he started making a living out of being “the spy” who was caught, and all the rest of it. He made it more dramatic to do so.

Yet there are things in his memoirs that have a ring of authenticity about them. The main element in those memoirs, I felt, was totally authentic such as his profound admiration for Oleg Penkovsky. They really clicked. Greville had a somewhat frustrating life, in a lot of ways. He was held back because of his class, as anyone who wasn’t upper middle class and upwards was treated in that era. He also was profoundly dyslexic in a time when that wasn’t recognized. He never reached his full potential academically, even though he was very bright.

He met this guy (Penkovsky) who was a war hero, who had been decorated more than 30 times during World War II. He had defended Kiev from the Nazis, at one point. He was a real self-actualized human being within the system he was in. Greville had this feeling of admiration that comes through in the movie, I hope. There was a very strong connection between them.

FRF: You delve into the family lives of these men and the film has a very intimate feel. It’s a spy thriller but it’s also an intimate drama of this unlikely friendship that is forged.

Cooke: That’s one of the reasons I was so drawn to it. Weirdly, I’m not a huge fan of the spy genre. I’ve admired many (spy) movies; I really liked “Bridge of Spies” and some of the early ones, but it’s not the sort of genre that I jump out and go see, because I find it quite cold. It’s about calculation. It’s about strategy. What I loved about this is that you have that but you also understand the cost of that, and what happens to people in their personal lives as a result. I thought that deepened it and gave it a new perspective on what it would be like to be in the middle of all of that, especially as a regular person.

With operatives, it took a certain type of person to succeed. You’d have to have that certain sangfroid ability to disconnect, whereas Greville wasn’t trained (as a spy). He didn’t have that. The vulnerability I found really attractive and interesting. Also, it’s something I’m comfortable with. I’m drawn to things that are moving.

FRF: You have strong female characters in Emily, played by Rachel Brosnahan and Sheila, played by Jessie Buckley. Rachel’s character was an amalgam of people Greville interacted with, right?

Cooke: She was. She’s actually an amalgam of four people. There were two main CIA people who were actually men but there also was a woman who was absolutely crucial to the whole story, a British woman called Janet Chisholm. There was an overlap, and then she sort of took over for Penkovsky. There’s a woman in this story who was absolutely crucial but we couldn’t get into that because the movie’s already two hours (long).

In talking to Rachel early on about it, one of the things I really liked about the way it had been conceived was that it was honest in the way that a woman would have had to work in such a male world at that time. She has to pretend to be less clever than she is. She has to make the guys—especially the Brits—think they made all the decisions, but I thought that was really truthful and interesting. Rachel is so super-bright and forensic in the way she thinks about things; she got that straight away. That was a really interesting part of the story to work on.

FRF: You directed the award-winning theater production of Stephen Sondheim and James Goldman’s musical “Follies” in 2017, which is being adapted for the big screen. What’s happening with that project?

Cooke: We’re at the script stage. I’ve just done a second draft of it and I’m feeling good about it. It’s taken a while. Initially, I thought it would be easy. Well, not easy but a natural fit for film because James Goldman was the writer. The book is quite fragmented and filmic but it actually needed quite a bit of delving to make it live, emotionally. We’re sort of reaching the point now where the first stage is complete, and we’re going to start making it happen—I hope. That’s where we are.

Cooke: Maybe. Hopefully. Everything is so unpredictable at the moment. One of the issues is so many of the actors are tied into deals on TV, and they have to complete their contracts, so landing a cast of this magnitude might take us a while. It’s important to get it right.