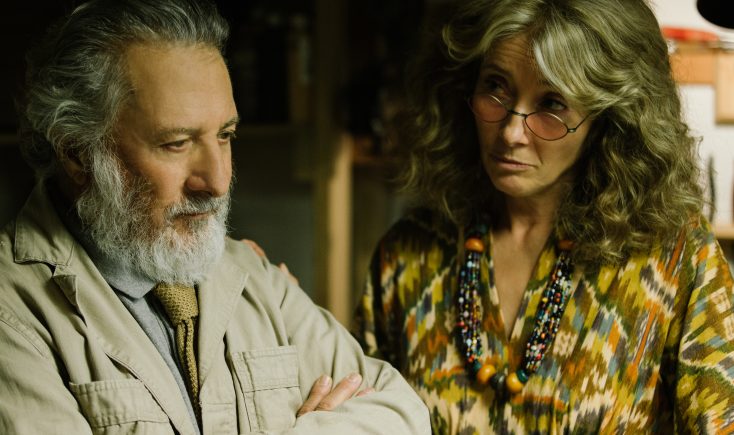 CANNES—Two-time Oscar winner Dustin Hoffman is getting positive notices for his performance in Noah Baumbach’s dysfunctional family dramedy “The Meyerowitz Stories (New and Selected).” The Netflix Original film premiered here May 21 and will air on the streaming service as well as receive a theatrical release.

Hoffman plays father to two men (from different wives), played by Ben Stiller and Adam Sandler. The estranged family gets together for an exhibit of their father’s artwork and to hash out longstanding grievances with each other. Baumbach credited Hoffman for helping him tap into his memories and draw something that was “raw, personal and emotional.”

Youthful-looking at 79, Hoffman spoke about being part of the talented ensemble, which also includes fellow two-time Oscar winner Emma Thompson and Sigourney Weaver, and working with Baumbach, whose previous films include “Frances Ha” and “Mistress America.”

Q: You play Adam Sandler and Ben Stiller’s father Harold in this movie. How did you feel about the character when you read the script?

Hoffman: Well like everyone else, all of us would work for Noah Baumbach (writer/director) for nothing. That’s what’s called independent (filmmaking). He’s quite expert. He is the best, and we do say his dialogue, word for word, whether we like it or not. I think not since “The Graduate” was I required to say every single word. It pays off because there is a music to his writing. I agree with Ben (Stiller). He is a singular artist. I don’t know if I want to work with him again. No, you can’t overstate his talent.

Q: You’re considered a legend, even among your co-stars? How do you feel about the way people regard you?

Hoffman: I resent people saying that they grew up with my movies. Everyone who is older than me, can you please stand up? Actually, when I read the script, I passed on it. I didn’t want to do it because I didn’t want to play an old man. My son, Jake, talked me into it.

Q: Is there any influence, a relative, a friend or colleague that you took the inspiration to build this character?

Hoffman: I said before, Noah and I met many times and compared both our fathers. That’s the honest answer, and I’m married to someone who knew my father. Like many of us, we are our father at certain points. She always points that out to me and says, “You’re—my father’s name was Harry —being Harry.” Someone said, “We mock who we are soon to become.” As far as (this being on the television) screen, I have a very big screen.