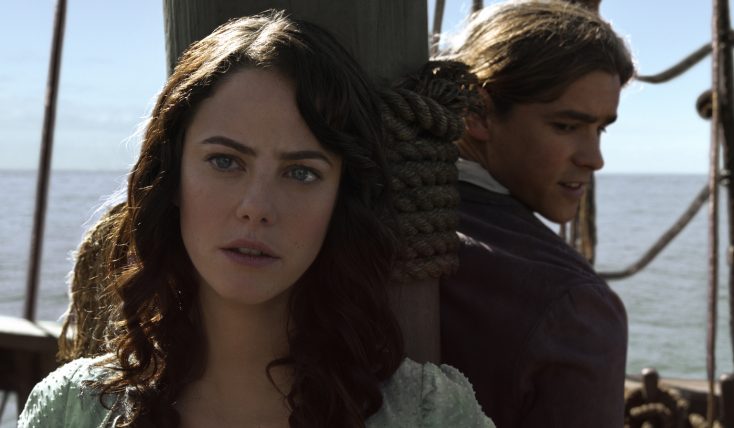 HOLLYWOOD—Brenton Thwaites and Kaya Scodelario infuse fresh blood into the longrunning “Pirates of the Caribbean” swashbuckling franchise. In “Pirates of the Caribbean: Dead Men Tell No Tales,” Thwaites plays Henry Turner, son of Will Turner (Orlando Bloom) and Elizabeth Swann (Kiera Knightley), who is on a mission to find a way to remove a curse placed on his father. Scodelario plays Carina, a feisty feminist  astronomer, who believes she should be allowed to study science, even though men think she’s a witch for doing so. She’s also on her a journey to find the trident of Poseidon, armed with a diary in which the stars provide clues.

Thwaites hails from Australia and most recently was seen in 2016’s “Gods of Egypt.” He was just 14 when the original “Pirates of the Caribbean: The Curse of the Black Pearl,” based on the Disney theme park ride, sailed into theaters in 2003.  Scodelario is a Brit, who is best known for her role as the sole female protagonist in the “The Maze Runner” sci-fi franchise.

Q: You two were maybe five when the first “Pirates” film came out?

Q: Were you fans of the franchise?

Scodelario:  I remember it being a huge part of the social scene at school before social media and all that, when you used to whisper on the playground about stuff and discuss what was cool and what everyone was going to go watch.

Thwaites: When humans used to talk to each other.

Scodelario: Exactly. It was totally “the thing” that week that everyone spoke about, and that was really exciting for me. So, when I actually got on set, I’d met Johnny at the table read and that was pretty cool. I really admire him as an actor and I got that out of the way but when he stepped on set as Jack Sparrow, I completely lost it. I went full fan girl and I (yelled) “Ahhh!” because it’s such an iconic character. He’s like Mickey Mouse. He’s created something that requires so much craft as an actor but is also so fun and easy for everyone to enjoy. It’s pretty amazing to create such an iconic character like that.

Thwaites: I was excited to see that number five was kind of leapfrogging from number three (“At World’s End”). I feel like number four went off tangent (“On Stranger Tides”) a little bit. And, although it did really well (at the box office) and people loved it, I loved it as well, we lost some of that storytelling and the qualities we loved so much in the first three. When I found out that the characters were kind of continuing the storyline from the third, I was really excited and just wanted to see where it would go.

Thwaites: Kaya was saying that seeing (Depp’s character) Jack Sparrow for the first time was more intimidating than seeing Johnny himself. I kind of agree with that. Seeing Johnny at the (script read), he’s really sweet, nice and friendly. He takes ideas and improvises and that’s great but in costume, when he’s working, seeing him for the first time as Jack Sparrow was mesmerizing.

Q: Kaya, it was reported that you hurt your shoulder during production. What happened?

Scodelario: I slipped on The Black Pearl (ship) of all things. The ship was on a gimbal so that it looked like it had docked on land and I was running from the bow to the stern and I tripped on one of the steps and caught myself with my left arm and that caused my shoulder to pop out. I feel all right now.

Q: How much research into witchcraft did you do in preparation for your role?

Scodelario: I was born on Friday the 13th and my mom is Brazilian and she’s very superstitious. She says that I have a witch’s freckle on my ear so I felt like maybe I just had that in me anyway and I tapped into my witchy side.

Q: Brenton, your parents are significant to the “Pirates of the Caribbean” storyline. How do you feel you relate to the parents in the film?

Thwaites: I feel that I’m similar to Will in that we are both fighting for similar goals. We’re both very focused and driven and fighting for what’s good. We both have a moral compass and we don’t really steer too far outside of that. In the first one Will is fighting to save his father and stops at nothing to do so and Henry is doing a similar thing in this one so I kind of feel like there is similar determination in the characters.

Q: What was the audition process like in getting your roles?

Scodelario: I was handed the script years ago when I was doing the rounds the first time and the part was very different. I think it was two female characters then so they really didn’t know who she was yet then (the part) disappeared and came back around a few years later and I was actually shooting the second “Maze Runner” movie. I needed to do (my audition) on tape because I didn’t have time to get to a later audition so I got all the boys (in the “Maze Runner” cast) to do the tape with me. They played Jack Sparrow and Gibbs and all the different characters.

Then I was flown out to L.A. to do a chemistry read with Brenton. He was already cast so we did it just to see, as actors, how we’d work together and how we could lift the dialogue from the page and make it work. Luckily, we had a really cool connection and it went from there.

Thwaites: I auditioned a few times in L.A. with a casting director and what followed was a meeting with the directors and they took me through their ideas and their dreams for the project and the movie was on hold for a while and those guys went and did something else and I went and did a few other movies and, when it came back around, I auditioned with similar material. It might have been the same scene and what followed that time was a meeting with Jerry Bruckheimer and the producers at Jerry Bruckheimer’s (production company). Then I was cast and involved in the chemistry reads for casting Carina so that’s where I met Kaya.

Q: It’s always been part of this franchise to have a pretty and self-reliant girl in it so how important is it to you as an actress to find these roles, especially in films that are very male-driven?

Scodelario: It’s completely important. It’s the biggest thing and that question never gets asked to guys because their characters are always fleshed out and interesting and it’s assumed that they are going to be strong and independent and all those things (and) yet we still have to have this conversation over a strong, independent female role. That’s such a shame but I think it’s great that we are speaking very honestly about it now and I’m happy to fly the flag for that. It’s an honor to play a woman that is so layered and interesting because I don’t know a single female that isn’t. I don’t know a woman that is so simple that you can define her in one word or one sentence so why should that be what we see in a movie? There are so many stories to be told and so many layers to peel back and she’s great. I’m really grateful to Disney for making sure that that is a part of this franchise and still holding strong with it. I’d like to see maybe five chicks in the next one.

Q: Have you been on the Pirates of the Caribbean theme park ride?  If so, do you remember your first time on it?

Thwaites: I’ve been on the one in Shanghai a week ago and the one in California a couple of days ago.

Scodelario: I’ve never been to Disneyland.

Thwaites: The one in L.A. is great for story because you are there and you see the old dolls (animatronic figures) drinking beer and it’s kind of fun and soft and a great ride and I had my little kid with me and she was loving it. The one in Shanghai is a spectacle. It feels like a 50-foot screen kind of 180 degrees in curvature and you feel like you are at the bottom of the ocean and it’s 3-D so water is spewing at you and air and people yelling. It’s crazy.

Q: Have you thought about where you’d like to see your characters go in another “Pirates of the Caribbean” sequel?

Scodelario: I think it would be really cool especially with how Carina ends this movie. I would like to see if she would like to follow in daddy’s footsteps, if she wants to focus on her astronomy or combine the two. There could be quite an interesting thing there.

Thwaites: There’s a nice moment at the end of this movie that kind of feels like the start of a journey. The great thing about this is we’ve come so far and learned so much but, at the end of it, you almost feel like it’s the start of something. I feel like Henry and Carina have such a great journey because they start off despising each other with separate beliefs and, throughout the film, start a relationship. When they start to understand more about each other and eventually realize they are on similar paths it would be great to see those similar paths go somewhere and take them on a journey together. To where I don’t know but doing what, I could guess. (She laughs.) My guess is sailing the seven seas with Jack Sparrow and the fighting pirates.