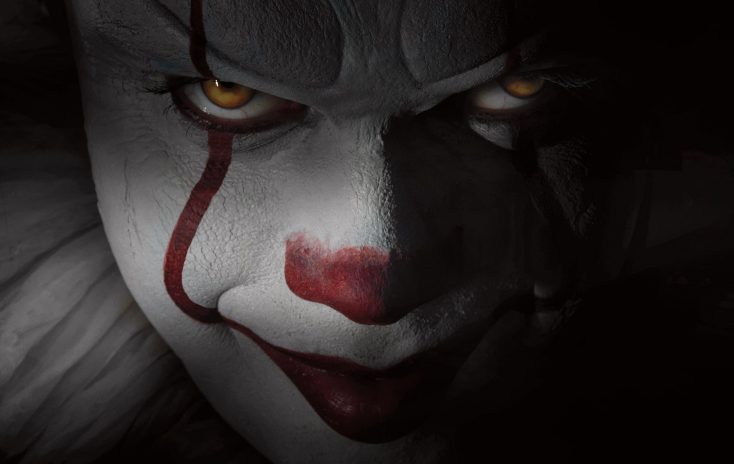 HOLLYWOOD—Bill Skarsgard brings on the scary as Stephen King’s most frightening clown villain, Pennywise, in the R-rated horror movie “It.”

The 27-year-old actor, son of Sweden’s Stellan Skarsgard (“Pirates of the Caribbean” movies), is fearsome as the toothy psychotic clown who terrorizes a group of Maine youngsters living in a small town.  The film is directed by Andy Muschietti, the Argentinian filmmaker who previously helmed the 2013 horror film, “Mama,” starring Jessica Chastain.

Skarsgard, who actually is quite charming and funny in real life, spoke about taking on the iconic killer role, filled by the great Tim Curry in a 1990 TV miniseries, and making it his own.

Q: What’s your experience with “It?” Did you read the book and watch the miniseries?

Skarsgard: Going into this, I watched the miniseries and read the novel. After watching the miniseries, I stayed away from it as much as possible because I knew we weren’t doing that again. But the novel was my bible, my source material. So, I read through it. I wrote on the pages and took notes and I’d go back to it throughout the whole shoot. It’s a 1,200-page book and there’s so much in there, especially with the character Pennywise, there’s so many little breadcrumbs. You go, “What is he trying to say here. I think he’s trying to say this.” There’s a purposefully mysterious aspect of what the character is. There’s a lot of room for interpretation.

Me and Andy (Muschietti, the director), going into it, had similar ideas of what the character was and then reading it reaffirmed what we thought the character is, the psychology behind it. So, yeah, the book was just great to have around.

Q: With the miniseries, you had an actor (Tim Curry) who had played this character before. Did you try to ignore that performance to deliver your own interpretation?

Skarsgard: It’s just a reinterpretation of a character like you do on stage. You have different actors portraying the same characters every year. For all of us, as filmmakers going into this, we didn’t want to do the same things that already had been done. Andy, in casting me, obviously, I’m much younger and a different actor and person than Tim Curry. Tim Curry is Tim Curry and no one will do Tim Curry as well as Tim Curry does … but nobody will do Bill Skarsgard as good as Bill Skarsgard. (He laughs.) I used my tools and thought about how I could have a new take on it and make it original and make it my own. That was, obviously, an important aspect of doing it.

Q: What was the psychology of Pennywise?

Skarsgard: I’ve been asked this a lot and I have a slight resistance in telling it. It’s a weird thing to reveal because it’s ours. You can read the novel and then watch the film and you can have your own interpretation of what he is. The huge, important thing for me doing this film was not only having Andy but having Andy’s trust in me, and our collaboration in doing the character. We were never in disagreement over the psychology behind (Pennywise). There is a chapter we’d go back to where Stephen King writes subjectively about it. There are a lot of clues throughout the novel that reveals the mind behind him.

After I booked the job, we had something like 10 days before we started shooting. So, I thought, “OK, I need to go through this 1,200-page book but that whole stage before I made the bond was me intellectualizing the character—the psychology behind him, how does he function, does he work, why does he work, why is he even around, does he even exist apart from the imagination of kids. This whole thing, almost an existential thing, is very true in the book when you read it and once you get the makeup on, I felt like I needed to embody this thing, in the third and final stage of the process.

Q: What was it like being transformed into Pennywise? What did you think when you saw yourself in the costume and makeup the first time?

Skarsgard: It’s strange because Andy’s such a visual guy and aesthetic guy, he was so involved in designing the look, which is amazing. I think the character is so cool. When I came into the production, he had this temp picture on the wall. The guys made a prosthetic with my features a temp look, which didn’t really look like Pennywise (as he looks now) so I took a picture of it with my phone and kept looking at it and wondering, “Who is he? What does he sound like?” because it was all abstract to me because I didn’t have the makeup on. When I was preparing to do this character, I didn’t know what the outfit would look like. I didn’t know what the face would look like.  The first time we had the makeup test, it took about five hours to get the prosthetics and everything on. I saw every stage and asked, “Oh, is that how it’s going to look?” I just stared at the mirror during those five hours and made different faces. We tweaked little things and made it better. And then we did the screen tests (with the makeup) and would play around with different faces. We’d find things that were really effective and really worked. I’d sit in my trailer filming myself.

Q: Did you try to scare yourself?

Skarsgard: That never works. But that was a very important aspect because I thought, “Now that I have this on, how is it going to work?” So, luckily, it only took three or four times before we actually started shooting with the full getup. But that screen test process and photo shoots were helpful because we were able to gather a map of expressions so when we started shooting we could just go, “OK, multiverse face” or “drooling face.”

Q: How did the denture appliance work?

Skarsgard: The buck teeth were Andy’s idea. I loved it but we had a lot of people to convince every step of the way in making a film like this. Also, the prosthetics on my cheeks to give the character a rounder, child-like look. It’s a weird contrast of something cute and horrible. It was a key element to what the character ended up being. Parts of him are almost childlike and cute. But the dentures were OK. They were just two little teeth. They didn’t change the way I talked. At first I was worried because I’d worked so hard on the voice. I didn’t want the dentures to change what I was doing. It didn’t impede my way of speaking. There wasn’t anything, prosthetic-wise, that I felt was getting in the way of what I wanted to do.

Q: How long was the makeup process?

Q: Did you purposely stay away from the kids while you were making the film?

Skarsgard: Yeah. It was me coming out of the refrigerator scene. We were talking about it and I was thinking, “Why not?” It’s one of those things like with kids you don’t know. They were a little older (to be truly scared) but they also were good little actors. Even when we were doing the first take of the scene, the first time Jack (Dylan Frazier who plays Eddie) sees me, and he (draws back in fear), I was in my own head and I was walking around in circles getting into the essence of what this character was. We blocked (the scene) slightly. I go and do it and I’m mocking his asthma and breathing and he’s crying and gagging and I’m drooling all over him. It’s a really intense scene and then (Muschietti) yells, “Cut.”  Afterwards, I asked Jack if he was OK. And he said, “Yeah, I loved what you were doing!”

I think it actually freaked him out but he used it which is a key element of being an actor. If something is affecting you in the scene and he’s using it to enhance it. So, he was grossed out by me drooling but he used that to be even more grossed out. That’s a testament to how good these actors were. They weren’t kids that you needed to manipulate to have a great performance. They knew, intuitively, how to enhance their performance in the scene.