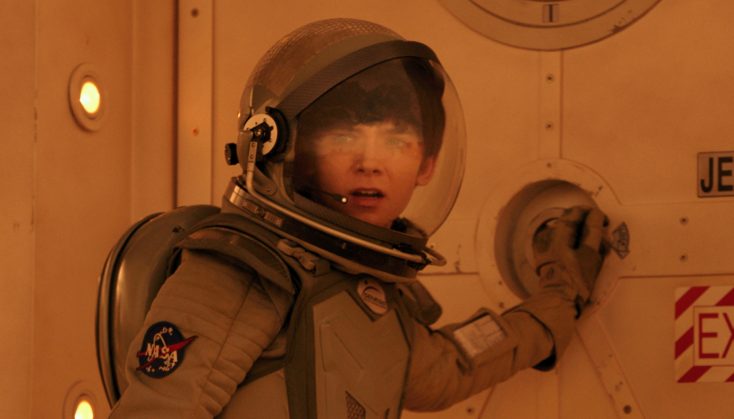 (l-r) Asa Butterfield and Carla Gugino star in THE SPACE BETWEEN US. ©STX Productions.

HOLLYWOOD—If he wasn’t a successful screen actor, Asa Butterfield might be working at a tech company or possibly exploring alternative energy solutions. The self-described tech geek reveals his interests (beyond acting) include technology, video games and the natural world.

Introduced to the cinema world six years ago in the titular role in Martin Scorsese’s acclaimed sci-fi fantasy “Hugo,” Butterfield has grown into a thoughtful and preternaturally intelligent young man.

Tall (he stands at 6 feet) and lanky, with striking blue eyes, he bears a calm, otherworldliness about him. It’s no wonder the British actor is frequently cast in films as outcasts with a keen sense of curiosity. He played a math genius in the 2011 independent film “A Brilliant Young Mind.” He also has starred in popular sci-fi fantasies including “Ender’s Game,” “Nanny McPhee” and he had a recurring role on the BBC series “Merlin.” Most recently, Butterfield starred in Tim Burton’s “Miss Peregrine’s Home for Peculiar Children,” as a teen who discovers clues to a mystery that spans different worlds.

Butterfield, who turns 20 on April 1, plays yet another otherworldly character in the romantic drama “The Space Between Us.” As Gardner Elliot, he is the first human born on Mars. A living experiment, his very existence has been kept a secret from most people back on planet Earth. He lives in the protected cocoon of a Mars space station, raised by a handful of scientists and astronauts. His only communication with the outside world is via computer chats with a teenage girl named Tulsa (played by “Tomorrowland’s” Britt Robertson), who has grown up in a series of foster homes. Naturally, 16-year-old Gardner wants to see her in person and soon engineers a way to get to Earth. Earth’s gravity, however, threatens to crush him. With time working against him, Gardner escapes from the eccentric billionaire who has funded the Mars expedition, and with his adventurous new girlfriend embarks on a journey to discover his identity.

The film, directed by Peter Chelsom (“The Mighty,” “Serendipity”) from a screenplay by Allan Loeb (“Collateral Beauty”), has a cast that includes Gary Oldman, Carla Gugino and BD Wong.

The shy yet personable Butterfield discussed his Martian role, getting the physicality right and playing outsiders.

Q: Did you have a backstory about how your character and Britt Robertson’s character began chatting online, or did you come up with your own thing about how you connected?

Butterfield: I guess it was just two kids kind of bored. My user name was Spaceman24/7, which is appropriate. She thought I was from New York.

Q: What traits do you share with your character?

Butterfield: Gardner and I are both quite interested in the natural world and are kind of fascinated by it, in lots of aspects. We both share a curiosity and a drive to see more of it and explore it. I think that is probably the biggest thing we share.

Q: What are your thoughts on space exploration or colonizing another planet? Does that interest you?

Butterfield: Yeah, I am interested in it. I like science fiction. I am quite a technologically kind of up-to-date person. I like seeing what the new developments are. As a human race) going to Mars is the next logical step. I’m still hopeful that we will come up with some sort of way to fix, or not necessarily fix, but try and help the (environmental) **** storm we’ve stirred for ourselves. As long as technology’s advancing, we should theoretically come up with a solution, because so much attention’s being put toward it, and if we don’t, then we’re all screwed and we need to go to Mars.

Q: I heard you make computers?

Q: Your character, Gardner, is like a fish out of water when he arrives on Earth. Simple things that we take for granted excite him. What are the things that you would like to experience for the first time?

Q: Your character is weighed down by gravity. How did capture the physicality of the role?

Butterfield: I tied weights around my ankles. I had a weight vest on just to see how that changed the way you move and the way you run. I had someone film me whilst I was doing all these different actions. Then you take them off and you try and replicate it as best you can. The hardest part was keeping it consistent. (Gardner’s) got some issues with his walk. As he gets better, and as he becomes more human, he finds it easier to walk, so eventually he’s walking like a real human, like a real boy. That was my fun journey of walking.

Q: Gardner has lived in a protected, sterile environment for 16 years. You really grabbed the innocence of the character and ran with it. Did you watch any movies or was there any kind of research in terms of innocent characters?

Butterfield: Innocence is something that I’ve actually had to do quite a lot of in my roles. I don’t know why. I guess I just have that kind of face. Whether (it’s my role in the Holocaust drama) “The Boy in the Striped Pajamas,” where he was a pretty innocent boy unaware of all the horror that’s going on around him, or a few other films I’ve done, I won’t go into detail. For this character, I watched “Being There,” which was a really great reference for me, and “Wings of Desire,” which (this) film consistently looks at, even in its cinematography, was interesting. (Gardner’s) a really interesting character, and me and Peter (Chelsom), the director, had a lot of fun creating him, making him unique and fun to watch.

Q: I heard you visited Japan recently. Was that for work or pleasure?

Butterfield: Vacation. My brother lives there and my uncle lives there as well, in Tokyo. His wife is Japanese. They have a family. I’ve got quite a lot of connections to Japan and I love it there.

Q: Are you in college?

Butterfield: I’m not in college.

Butterfield: Maybe I’ll go at some point, but I’m not in any rush. When I got out of school I was so glad to be free of that kind of system. The last thing I wanted was to go back into another institute where I’ve got to learn and listen to people. I just wanted to do my own thing and be in control of my own (destiny). I haven’t really got a long-term plan. I’m just kind of winging in.

Q: Having played characters like that that are innocent, do you think people have a certain expectation or preconception of you when they meet you?

Butterfield: I don’t really know what people’s perceptions of me are. When I’m back in London I manage to keep pretty low profile, so I can just do my own thing and hang out with my friends, and there’s not really any pressure. I’m not trying to do anything in particular. I just do what interests me, and that is video games, technology and the natural world. If you know me, then you know that’s the case. Otherwise, I have no idea what people think of me.