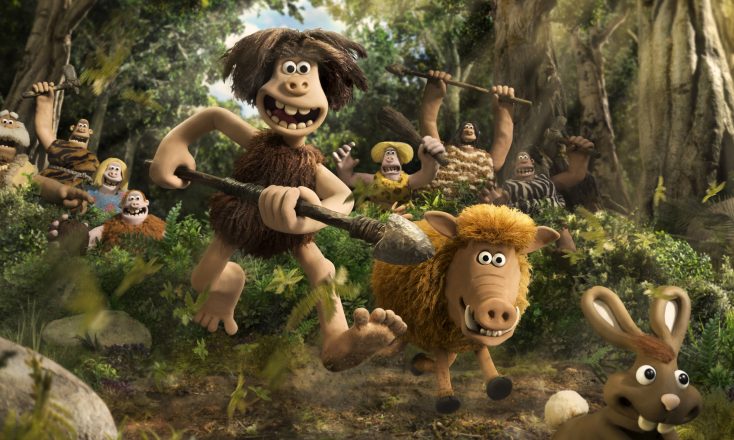 HOLLYWOOD—Acclaimed filmmaker Nick Park has employed the painstaking process of stop-motion animation to bring his imaginative and humorous films to life ever since he was a teenager. Influenced by stop-motion animation pioneer Ray Harryhausen, the amiable and, soft-spoken creator of the “Wallace & Gromit” shorts and feature films as well as the blockbuster hit “Chicken Run” has been entertaining movie-goers with his distinctive brand of British humor and storytelling for nearly three decades. Though his more recent works have incorporated some computer-generated/digital animation, most of it remains hand-made using clay puppets with distinctive facial features crafted by a small army of artists and animators.

His latest effort, the feature-length comedy adventure “Early Man,” tells the story of a young caveman named Dug, who tries to save his U.K.-based tribe from being exiled from their rustic Stone Age valley by challenging a more advanced tribe from the Bronze Age that wants to take over their land for mining purposes to a game of—what else—soccer (better known throughout the world as football).

Park, who has collected four Academy Awards as well as other accolades over the years, says the mostly hand-made animated film took eight years to evolve from a simple idea.  He co-wrote it with Mark Burton, who also co-authored and co-directed the stop-motion “Shaun the Sheep: The Movie,” as well as other projects at Aardman, the revered U.K. animation house.

Park decided to fly solo as director on “Early Man,” employing two Aardman veterans—Will Becher and Merlin Crossingham—to handle the day-to-day animation supervision on the time-consuming and what the filmmaker refers to as “mammoth production.” By doing so, the filmmaker was free to focus on refining the story and work closely with the voice talent, including Oscar winner Eddie Redmayne (“The Theory of Everything”), Maisie Williams (“Game of Thrones”), Tom Hiddleston (Loki from “The Avengers” movies) and “Chicken Run” veteran Timothy Spall. Park himself voices a lovable warthog named Hognob who grunts and snorts.

Together with Becher and Crossingham, Park recently spoke about the new film, which not only tells an engaging story about defending your tribe, it also delves into gender and diversity issues. Williams, best known for her live-action role as Arya Stark on the popular “Game of Thrones,” voices Goona, a young Bronze Age pan seller who secretly aspires to play soccer professionally with the traditionally all-male team, and finds acceptance with Dug (Redmayne) and his cave people, who comprise an inclusive and diverse team comprised of people of various races and genders.

Q: Nick, you are the sole director on this. Why do it yourself?

Park: We had a great learning experience (co-directing and co-writing) with Peter Lord on “Chicken Run” and Steve Box on “Wallace & Gromit: The Curse of the Were-Rabbit” but, this time, I felt like I wanted to see what it was like to direct by myself.

Q: Will and Merlin, how did your previous experiences working together on “Curse of the Were-Rabbit” help in supervising the animation on this?

Crossingham: It’s kind of essential because we had to work independently but together at the same time. Will and I were down on the studio floor doing half the film each. I was driving it from the editing and the story team. Having worked together for so long, it just means that there are things that you understand that don’t have to be said or explained. We have a bit of a shorthand. It saves a lot of time and energy and pain and tears. I’m just pleased that it all worked out. We do have that after all this time.

Q: Ever since Nick’s Oscar-winning short film, “Creature Comforts,” there has been this wonderful simplicity yet incredible humor and sensitivity in his films. Will and Merlin, how did you seek to replicate that with the animation direction, because Nick’s direction is so distinctive and unique?

Becher: We both spent years working for Nick. We watched him work starting with “Chicken Run,” and I was a massive fan. I really studied it. Working under him, I’ve gained a sense of how he interacted and created the characters.

On this film, I spent about a year shadowing Nick, following him everywhere to every department, to absorb as much of his brain as I could. Even though we were out there on the studio doing some of the stuff that Nick had done before to us, it was amazing, brilliant experience. We spent a lot of time with Nick working on each sequence, doing all the acting, the performances. The performance is still Nick’s, of course, all the details, everything went through him. So, although we were directing, it was all very much coming from Nick’s perspective.

Q: In the 40-plus year history of Aardman Studios, this is the biggest production, right?

Park: Yes, and these guys were on the sharp end of the shop doing all the work. I was out by the pool on the phone. (He laughs.)

Q: How was it to stay focused on the story and the characters?

Park: To be at the top of the pyramid, you have to have two very strong captains. It’s kind of a different organization on how it all works. It means I was less “on the floor,” but like Will was saying, in order to get ideas across, we did a lot of acting to get the comedy timing.  I’d worked so much on the script with Mark (Burton, co-writer), and the storyboards. I knew the project so we’d talk endlessly about it. We were very much on the same page.

Q: Were there moments working with Eddie Redmayne, Maisie Williams, Tom Hiddleston or the other cast members improvised some of their lines?

Park: Yes, that’s why it’s great working with such great actors, because they often have such wonderful ideas and sometimes you just want to go with it because it’s like comedy gold.

Q: What was it like the first time you watched the first cut of the movie?

Becher: The process was such that the very end of the film was a work in progress so the first cut was about two hours long. There was lots of reviewing but it was evolving the whole way through.

Crossingham: We storyboarded the whole thing and took out whatever wasn’t working. Even when the animation has been shot, we were revising it.

Q: Nick, you started out as an animator and grew into a director. Now that you’re directing and no longer animating, what have your learned and how have you grown as a filmmaker?

Park: I feel like I’m a student every time. I’m very much learning all the time. There were things on “Chicken Run” that I learned. Now, from working with writers like Mark Burton, I’ve learned more about character arcs and things you didn’t know what you were doing. So, it’s always a learning process.

Q: What made Maisie Williams, Tom Hiddleston and Eddie Redmayne the right voices? Did the animation evolve once they were onboard as the voice of their characters?

Q: Did the motion of the characters change to adapt to the actor’s voice?

Crossingham: Having such great vocal performances, for us, is important for us in finding the characters’ physicality not only for a character’s specific expression, but also just how they hold themselves in what comes through in that performance. Sometimes we would change the face slightly, the performance.  The sculpt of the character sort of parallels the casting. Sometimes you get to the point where changing the shape helps the sound appear to come out of that character. And I’m not talking about big changes, just subtle kinds of ways we would use expressions and the mouth shapes, in particular.

Q: What were some of the particular challenges of this film?

Park: The world needed to feel bigger, like with the stadium, which included lots of (virtual reality). With the puppets, in each film we’ve included more research. On the surface, they look simple but they’re actually very complex. On the one hand, we had this massive stadium scene where we had all these puppets, but we also had to use digital for the background for the crowds in the background. At the same time, with the cave men, there’s kind of a naivete with them and their primitive humor. For example, with Eddie’s character, we had the animators not care too much about ruffling Dug’s hair.