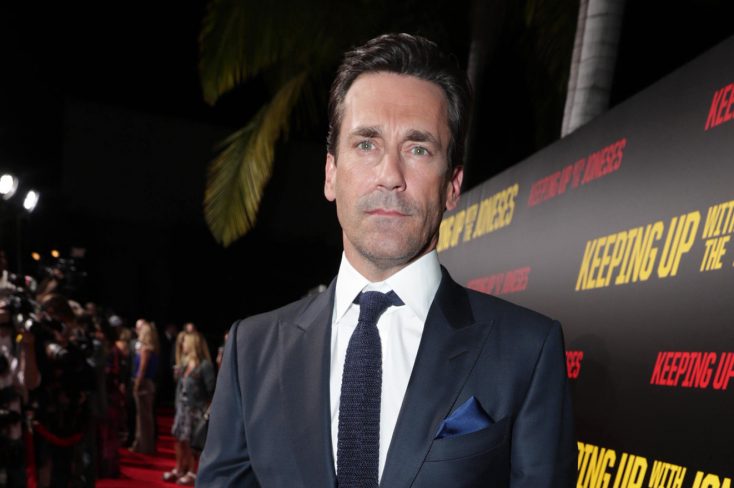 HOLLYWOOD—For seven seasons, Jon Hamm played a suave, sophisticated upwardly mobile family man with a secret on AMC’s “Mad Men.” In the new feature comedy “Keeping Up with the Joneses,” the Emmy winner plays another suave, sophisticated urbanite with an equally stunning wife, and a secret. They’re spies.

Tim Jones (Hamm) and his wife Natalie (Gal Gadot) are new neighbors to Jeff and Karen Gaffney (Zach Galifianakis, Isla Fisher), who wonder what these two too perfect strangers are doing moving into their suburban cul-de-sac. Tim claims to be a travel writer whose hobbies include blowing his own glass sculptures while his wife is a social media consultant and cooking blogger. Karen doesn’t buy their claims but eventually both she and her husband fall under the spell of these two glamorous, sexy newcomers. Soon, though, the Gaffneys find themselves in the middle of a wild and thrilling international espionage adventure involving the “Joneses.” Greg Mottola (“Superbad,” “Adventureland”) directs the action comedy from a screenplay by Michael LeSieur (“You, Me and Dupree”).

Hamm, looking dapper in a dark jacket, checkered shirt and slacks, spoke about taking on the undercover role, in which he gets to both engage in comedy and spy action alongside Gadot, who plays Wonder Woman in the DC Comics’ superhero franchise, as well as veteran comedians Galifianakis and Fisher.

Q: Can you talk about becoming part of this project? Did you always want to play a spy?

Hamm: I don’t think I always wanted to play a spy. I think there’s a special place in any sort of kid’s, boy’s, heart of growing up with James Bond and that whole kind of thing that makes it cool. I think what we found in this is there’s something naturally funny in taking these prototypes of masculinity or cool and then putting them in situations where things don’t go perfectly as scripted. What I really liked about it was that both characters, it sounds so hokey, but they both learn something about themselves. In my character’s, I remember when we were talking about going through it, I said I just feel like it should be something that, it seems like he has everything and yet he doesn’t. Or he might be really good at this job, but he doesn’t necessarily like it, because I think that’s something that everyone can identify with. Nobody on the planet can identify with being a James Bond, because that person’s fake. I appreciated that both Greg (Mottola, the director) and Zach and myself were all on the same page with trying to find some kind of humanity in what is an obviously very high concept kind of story.

Q: How was it working on location in Atlanta?

Hamm: We did. We have a very nice time. Atlanta is a very fun place to be an adult in. There’s fun stuff to do. There are great restaurants and places to see comedy and music and yeah, we had a good time. You know what we didn’t do? Walk down the BeltLine—we should have done that.

Q: Were people freaking out that you were in Atlanta, going out to dinner and working in town?

Hamm: Atlanta’s had a huge surge in popularity in the movie industry, so people like us, that’s no big deal. I think everybody wants to see Iron Man and Captain America and all the Marvel guys, because they’re all down there. We didn’t have a problem with it. I mean every now and again you’d get a group of drunk girls that would kind of lose their mind a little bit and be a little inappropriate, but whatever. Also, we would eat at like 6 p.m., because we were exhausted and we had to get up at 6 a.m.

Most people are very sweet. It is after all, the South. I think there’s a lot of that, too. Zach has family in Atlanta so I went to his cousin’s house a couple times for dinner, and dinner with his mom and dad that one night at the steak place. We had a very nice time. It was really fun.

Q: How are you similar to your character?

Hamm: The thing I constantly wish I had more of is adventurous. I like the idea of travel and new places and cultures. I very much wish I had more of that in my life, but I also get very nervous, and a lot of it is going out in public these days. Everybody, and I don’t want to say everybody like I’m some big deal, but sometimes you feel like you’re being stared at or watched, rather than just being part of the experience of experiencing another culture. To illustrate that point, I remember being in Florence once, staring at the statue of David and thinking, “Whoa.” It’s way bigger than you think it is. It’s enormous and it’s beautiful and you’re in this beautiful museum. I turn around and this man and his daughter were staring at me. They were uncomfortably close to me. They had a camera out and you’re not allowed to have cameras. They said, “Can we please?” I was like, “Guys, I don’t think we’re allowed to take pictures in here, and also that’s a thousand year old work of art that you might want to pay attention to.” I guess my uncertainty is probably the thing I have that’s most similar to Tim Jones. It’s a strange thing.

Q: The scene where you take Zach’s character to an exotic restaurant where they serve snake wine with an actual snake in it was hysterical. How much of that was ad-libbed, or did you stick to the script?

Hamm: Not much was necessarily ad-libbed, other than a few interjections here and there. That scene was actually a replacement scene for a scene we had shot earlier, during main production. We wanted to get it as written, as much as we could. The good part about working with friends and people that you know is that there’s a little room to wiggle around if you feel like you need to, or if it makes you feel more comfortable, or if you think it’s funnier, honestly.

Q: The scene where you and Zach go indoor skydiving was fun too. It was such a random thing.

Hamm: That is a really fun thing to do.

Q: Did you guys actually do it or did you have stunt doubles?

Hamm: Yes, it was us. It was also really painful thing to do, because you’re being buffeted by 140mph winds that are supporting you. Everything hurts after you do that, because you’re pushed into a little, kind of this thing. We had a camera guy in there with us. We shot it towards the very end of the shoot.

Q: Did you practice beforehand?

Q: Did you have any favorite sequences to shoot, aside from the indoor skydiving?

Hamm: Yeah. I think all the car chase stuff was really fun. Some of the fight stuff was really fun. The car chases are challenging because there’s a million moving parts, literally, and it can be really dangerous. You’re making a movie, and you don’t really want anything bad to happen obviously, and you don’t want to put anybody in any danger, at all. I’m very, very cognizant of, “Guys, it’s only a movie. If anything gets scary, let’s stop and we’ll start up again and we’ll make it safe.” There’s always that sense of being very aware of safety. At the same time you’re supposed to be acting and fearless and all that other stuff, too. So it’s a real challenge. It’s fun, a fun challenge, but a challenge nonetheless.

Q: What was it like working with Gal Gadot, who plays your wife in this?

Hamm: That was very impressive. Gal, in a similar way, had so much on her plate, and then the prospect of what her next year was going to be and managing that. I was so wildly impressed by her ability to manage all of that, as somebody relatively new to the spotlight. I’d never met her before doing this and I got along with her great, as we all did. A big part of why this movie succeeds is that the central foursome all get along with one another, in the most basic way. If that chemistry isn’t there then I don’t think any of those scenes really work as well as they should. But it is, and they do and it’s good because there are a lot of them. Especially when we were shooting, we spent a lot of time together, all four of us. It was just really nice. It was a good group.

Q: Do you and your co-stars in this still hang out?

Hamm: We had dinner the other night, a big group of us. But some of us live in L.A, some live in New York and some are in Tel Aviv. We all have our own things going on. It’s nice to catch up, and especially nice when there’s little kids involved, because you can see like, “Oh my gosh. Look at that little peanut just turned into a full-grown person.”

Q: Would you be brave enough to try the snake wine?

Hamm: I would, fully. Walter and Laurie (MacDonald) Parkes, our producers on the film, actually went to a restaurant that served snake wine. I think it might have been in Indonesia, but yeah, I would do it. I don’t think it’s legal here, necessarily. But I would totally try it. I’ll eat anything.